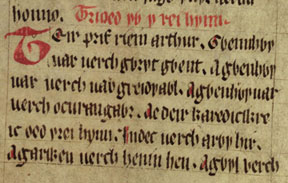 The Welsh Triads (Welsh Trioedd Ynys Prydein, literally "Triads of the Island of Britain") are a group of related texts in medieval manuscripts which preserve fragments of Welsh folklore, mythology and traditional history in groups of three. The triad is a rhetorical form whereby objects are grouped together in threes, with a heading indicating the point of likeness. For example, "Three things not easily restrained: the flow of a torrent, the flight of an arrow, and the tongue of a fool".

Some Triads simply give a list of three characters with something in common (such as "the three frivolous bards of the island of Britain") while others include substantial narrative explanation. The triad form probably originated amongst the Welsh bards or poets as a mnemonic aid in composing their poems and stories, and later became a rhetorical device of Welsh literature. The tale "Culhwch and Olwen" has many triads embedded in its narrative.

The Triads and The Chronicles of Prydain

Author Lloyd Alexander, while developing his Chronicles of Prydain, was inspired by the Triads via the notes which Lady Charlotte Guest added to her English translation of the Mabinogion. In her extensive annotations, Guest drew links between the characters and stories appearing in her Mabinogion collection, and those listed and described in the Triads.

Some of the names Alexander drew from the Triads (with variant spellings) and included in the Prydain series include Dallben, Coll, Hen Wen, Fflewddur Fflam and Melyngar. Gwydion and Arawn also appear in the Triads, but Alexander probably drew these names from the tales in the Mabinogion; Gurgi also appears (as "Gwrgi"), but Alexander asserted he had pulled that name from a later collection of legends by an author named Davies.

The Triad texts also include references to King Arthur and other semi-historical characters from Sub-Roman Britain, mythic figures such as Bran the Blessed, undeniably historical personages such as Alan IV, Duke of Brittany (who is called Alan Fyrgan) and even Iron Age characters like Caswallawn (Cassivellaunus) and Caradoc (Caratacus).

The earliest surviving collection of the Welsh Triads is bound in the National Library of Wales Peniarth MS16 ("MS" stands for manuscript), which has been dated to the third quarter of the 13th century and contains 46 of the 86 triads known. Other important manuscripts include Peniarth MS45 (written about 1275), and the pair White Book of Rhydderch (Welsh: Llyfr Gwyn Rhydderch) and Red Book of Hergest (Welsh: Llyfr Coch Hergest), which share a common version clearly different from the version behind the collections in the Peniarth manuscripts.

Rachel Bromwich, whose edition and study remains the standard reference, argues that while none of the Triads in their current form is much older than the 9th century, it is clear that at least some of them offer a medieval Welsh view of pre-Saxon history, characters and events of the British heroic age of the 6th and 7th centuries. She points to the “marked predilection for triple groupings” among Celtic peoples, and argues that the Triads (and perhaps the related grave stanzas) are used as “a means of cataloguing the early traditions of Wales.”

The Red Book of Hergest This is a "fairly complete version" according to presenter Mary Jones, though differing in order, and much expanded, from an earlier version in Peniarth MS45 (which is dated to the late 13th century).

Peniarth MS54 This manuscript dates from 1480 though it contains what presenter Jones calls "Early Triads".

The Arthurian Triads These appear in the 13th century Peniarth MS16.

The Triads of the Horses Date and original manuscript unknown.

Information about Welsh manuscripts has been drawn mainly from this page, this page and this page.

Retrieved from "https://prydain.fandom.com/wiki/Welsh_Triads?oldid=6959"
Community content is available under CC-BY-SA unless otherwise noted.