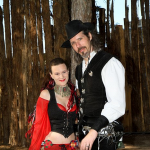 Noah David Henson is my name. Born and raised in Houston, Texas and surrounding rural communities, I now live in Austin with my adorable wife Joanna. I'm a semi-professional illustrator and aspiring novelist.

I discovered The Chronicles of Prydain series in the late 1970s, when I was in elementary school. My grandparents, IB and Christine Henson, sent me a five-volume boxed set for Christmas: All five books in a handsome box with covers by Don Maitz. To this day I have no idea why they chose these books for me -- what inspired them to purchase and ship them to me. Years later I asked my grandmother if she recalled sending me the books, but she had no memory of the gift. Little did she realize how deeply the Prydain series would affect me as an artist and as a person.

The books were and remain my first literary love; they taught me that kindness (to animals and others) was more important than pride, and that the search for wisdom and self-improvement never ends. Prydain also crystallized my love of fantasy adventure, which had begun a few years earlier with my appreciation of the tales of King Arthur and Robin Hood. In each of these I found something about freedom, about the call to adventure and about mysterious, perilous forests.

Soon I donned a towel as a traveler's cloak, and explored the woods around my father's rural house imagining I was Taran searching for Dyrnwyn or for Hen Wen. It helped fuel my creative fires that my dad's farm house was a close (albeit Texan) approximation of Caer Dallben, replete with an old white house facing a chicken yard that was encircled by several outbuildings, including an old forge and a pig pen, and forest all around. Add to all this the fact that as a tall Caucasian boy with brown hair I was not far afield from Maitz's paintings of Taran, and you begin to understand the profound connection with Prydain that took hold of my young mind and heart.

My love of fantasy continues to this day with my fanhood of Tolkien's The Lord of the Rings, GRR Martin's Song of Ice and Fire series, the Harry Potter series and the Star Wars films. I hope one day to write and illustrate a fantasy series of my own. In the meantime I like to explore Prydain.

Retrieved from "https://prydain.fandom.com/wiki/User:NoahDavidHenson?oldid=6927"
Community content is available under CC-BY-SA unless otherwise noted.