The Snowstorm is the seventeenth chapter of The High King. Here the theme of noble self-sacrifice descends on one of the series' major protagonists. It is a bittersweet moment, with the sadness of the scene leavened by the character's good-humored bravery in the face of loss. This chapter also contains the scene depicted on the 1990s book cover by Jody Lee. 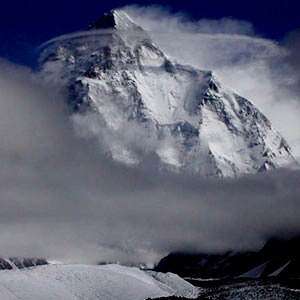 Taran and the Companions reached the borders of Annuvin; the Fair Folk warriors had to turn back owing to the lethal effects of the Land of Death on their health. Only Doli decided to stay on as the group's guide through the treacherous passes of the barren wasteland. Almost at death's door, Doli stubbornly refused to leave the group, and Taran -- affirming he was no war leader, but an Assistant Pig-Keeper -- would not leave him to die. Doli then discovered the effects were less if he turned invisible, and the companions followed his walking staff. Soon Fflewddur spotted gwythaints circling over a ravine; masses of crows embattled the great birds and drove them off. One of these was Kaw, who croaked the name of Achren; the group found her in the ravine, wounded by the gwythaints and starved almost unto death. They nursed her back to a measure of health. 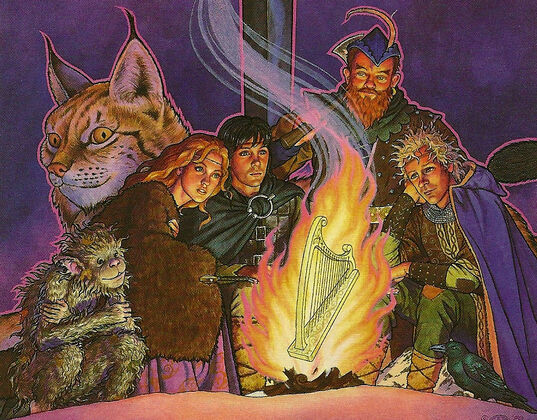 A snowstorm arose and the companions struggled against the knee-high drifts and bitter cold. Separated from the main force of Commot warriors -- who Doli was certain would find shelter in a cave he had spotted -- the group had to press into a shallow gully. Eilonwy began to drift away, professing warmth and comfort; Gurgi curled up beside her and would not be roused. With no firewood to burn, Fflewddur destroyed his harp over his knee and Doli sparked the kindling into a bright, blazing fire. The bard declared satisfaction as it burned, since he was never good at playing it; yet at this coloring of the facts, strings broke even as they crisped in the flames. Music burst from the burning harp, and it seemed all the melodies it had ever strummed poured forth from it, even as a warming wind blew in from the south, the dawn rose and the snow began to melt.

All that was left was the single unbreakable string which Gwydion had long ago given Fflewddur; it "had twisted and curled around itself, but it glittered like pure gold".

Retrieved from "https://prydain.fandom.com/wiki/The_Snowstorm?oldid=9746"
Community content is available under CC-BY-SA unless otherwise noted.