The Mask of the King is the second chapter of The Book of Three. A scene from this chapter is the one most often realized in cover artwork for the different publications of the book. In this chapter, we meet an icon of villainy and an icon of heroism, and the theme of things not always being what they seem is introduced. 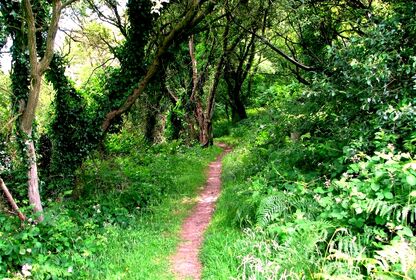 Taran lost his way back to Caer Dallben after searching for Hen Wen. In an eerily quiet forest, he came upon the Horned King, who was followed by many warriors. One of them caught sight of Taran; as the boy tried to flee into the woods, a blade stung him across the back. Taran fell unconscious.

When he awoke, a man kneeling beside him introduced himself as Prince Gwydion.

Taran refused the stranger's offer of drink, incredulous that this man could be Gwydion. The boy had acquired a glorious image of the Prince of Don through Dallben's teachings. On seeing his fine, gold-pommeled weapon, however, the Assistant Pig-Keeper knelt and bowed his head.

Gwydion explained that he had been traveling from Caer Dathylt on a hard path beset my many enemies, to see Hen Wen. After Taran disclosed that he was from Caer Dallben, Gwydion -- who knew both Dallben and Coll by name, much to the boy's surprise -- decided they should renew their search for the oracular pig on the morrow. The prince wondered openly about Taran, who knew neither his own parentage... nor his destiny.

Retrieved from "https://prydain.fandom.com/wiki/The_Mask_of_the_King?oldid=9753"
Community content is available under CC-BY-SA unless otherwise noted.