The King of Mona is the seventh chapter of The High King. Here is a rousing tale of battle and the storming of a castle, albeit with tragic consequences and with a sudden, more dire shift in goals to be undertaken by the heroes. 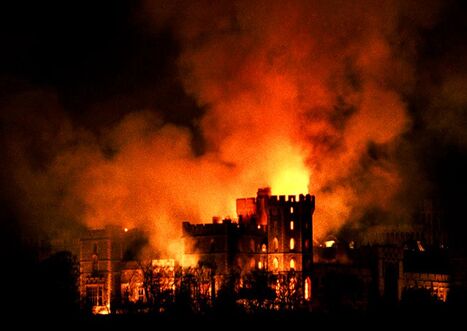 In their prison larder at Caer Cadarn, Gurgi heard the shouts of battle before the other Companions, who were prepared to sell their lives dearly rather than be slain at Magg's orders. The group was thus surprised to see Princess Eilonwy fling open the door and hand them Gwystyl's smoke-eggs, exploding toadstools and blinding powder. The captives burst free and together, Taran and Eilonwy raced into the smoke-choked courtyard, where King Smoit's warriors fought against Magg's invaders, and Smoit loudly rallied his forces to him. Gurgi, drenched in smoke from a clutch of broken eggs, spun through the melee, terrifying his foes and causing them to rout. 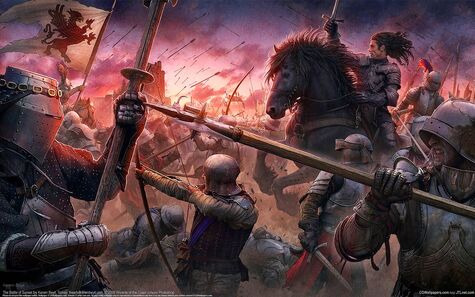 Taran blinded a warrior with the powder and took his sword, then fought alongside Coll against the swordsmen besetting Fflewddur, who, freed from the press of battle, caught Taran up on recent events, including Magg's men stumbling upon Glew. The tide turned and 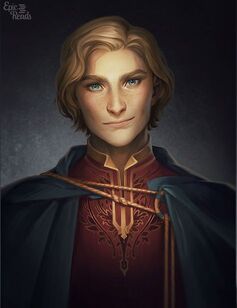 Gwydion ordered a retreat, but Magg's men blocked their exit. King Rhun rode in on his dapple gray, shouting orders to unseen spearmen and archers! Magg's men, deceived by the ruse, faltered -- as Llyan came bounding in looking for Fflewddur! Smoit's men seized the moment to push forward; Gwydion mounted Melyngar while Smoit and Coll joined him in an equestrian charge.

Taran, about to seek Melynlas, was called on by Eilonwy to help Rhun. An arrow had deeply pierced the King's side and broken off. He talked of the sea wall he had half-built, and which Taran had shown him how to improve, as Taran bent to tend his wounds. Fflewddur came up praising Rhun, but Taran, grief-stricken, told him: "The King of Mona is dead."

The survivors raised a burial mound for Rhun and all the fallen. Taran pledged to finish the sea wall at Mona Haven, to make the harbor safe for the fisher folk there. Magg had escaped; Gwydion and the others returned wearily, and the Prince of Don spoke of a new choice to be made. 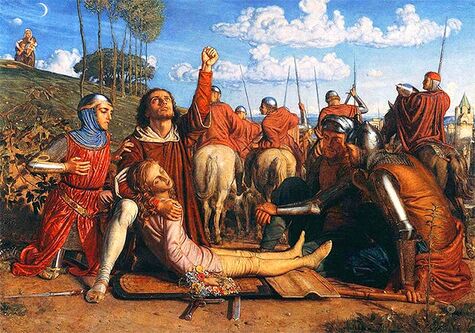 Gwystyl -- who had left for the Fair Folk kingdom -- had reported that Arawn's forces were gathering. A trip to Annuvin to seek the stolen sword Dyrnwyn would waste lives and time. So Gwydion decided to rally the Sons of Don. Smoit and Fflewddur he charged with rallying their cantrevs for war, and asserted that King Pryderi of the West Domains would be their staunchest ally. Taran he sent to rally the Free Commot folk -- alongside Coll, Gurgi and Eilonwy. Their forces would all meet at Caer Dathyl in the north of Prydain.

Even Gast and Goryon put aside their differences to join Smoit's army. Aeddan the farmer offered a rusted sword to Taran, but the newly made war leader sent him to Smoit. Taran waited a bit for Kaw's return but the crow did not come. Eilonwy offered her tapestry as a battle flag, on a spear which Gurgi carried: the banner of the White Pig.

Retrieved from "https://prydain.fandom.com/wiki/The_King_of_Mona?oldid=8678"
Community content is available under CC-BY-SA unless otherwise noted.