The Horned King was a mighty and much-feared war leader, and the champion of Arawn Death-Lord. The enchanter Dallben said he was "as powerful as Gwydion; some say more powerful." The Horned King was a man given to acts of cruelty and malice, "for whom death [was] a black joy." No man knew his name, nor had seen his face. He rallied around himself many cantrev lords with the intent of defying the Sons of Don and marching on Caer Dathyl.

The Horned King rode a black horse and wore a crimson cape that flowed from his naked shoulders, and a mask in the shape of a human skull, with great stag's antlers that "rose in cruel curves". His gigantic arms, left bare, were stained crimson. He wielded a sword.

The Horned King was a mighty warrior reportedly on par with Prince Gwydion. He was a skilled rider and swordsman, and beyond his purely martial powers he seemed to produce a chilling effect on all those who beheld him. His mere presence caused the beasts of the forest to quiet, and Taran was awestruck by his visage. It remains unknown whether this effect was one of enchantment or mere shock at his skeletal costume.

At the climax of the book, face-to-face with Taran and Eilonwy, the Horned King hesitated briefly when Taran partly drew the enchanted sword Dyrnwyn from its sheath. That in turn gave Gwydion the opening he needed to destroy the antlered warlord with the only weapon that would work: the power of the Horned King's true name (which he had learned from Hen Wen). At the utterance of his name, the Horned King was struck by a flash of lightning and destroyed by flames.

The true name itself is never revealed in the Chronicles. When Eilonwy asked Gwydion for it, he only revealed that it was "not as pretty as yours."

In a late 16th-century manuscript, Peniarth ms98, a summary of the earlier Welsh poem "Cad Goddau" provides details not found in the original poem:

This was the summary from which author Lloyd Alexander drew the basic plot for the first book in the Chronicles of Prydain, The Book of Three. Further, according to author Robert Graves in his 1966 book The White Goddess, which Alexander used as a source of inspiration and research, the use of secret names is a common mythological motif. "In ancient times, once a god's secret name had been discovered," wrote Graves, "the enemies of his people could do destructive magic against them with it." (p. 49)

As to the antlered aspect of the character, Graves notes that such headdresses were often worn by ancient British kings and that these items had been discovered in burial mounds. In other regions, such as Russia and Scythia, horns were sometimes engraved on bronze helmets or stylized as tall hats. 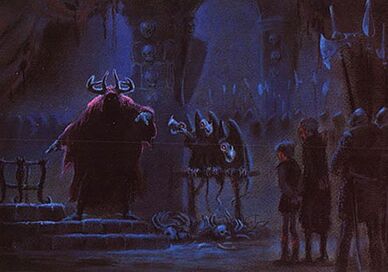 In this film, which combines scenes from the first two books, the Horned King takes the role of the main villain, as in this version, Arawn is an evil spirit trapped inside the Cauldron. The movie also transforms the Horned King's skull mask into an actual rotting skull, so that the King becomes some kind of demon, lich, or otherwise undead being.  The character was voiced by John Hurt.

Disney's Horned King has aspirations of becoming a god among mortal men, and believes that the Black Cauldron will allow him access to god-like powers -- including the ability to resurrect an army of the Cauldron-born. He initially has Eilonwy kidnapped, believing that the Golden Pelydryn can locate the Cauldron. When that plan fails -- and with the princess locked away in a dungeon -- the King commands his gwythaints to capture Hen Wen, having sensed her scrying at the beginning of the film. When Taran intervenes and rescues the pig, the Horned King has the Assistant Pig-Keeper locked in the dungeon as well for meddling with his plot. The Horned King disappears from the plot throughout Act II, returning for the climax where he demonstrates his dark powers by bringing his Cauldron-born army to life. Gurgi's heroic sacrifice puts a stop to the army of deathless warriors, causing the King to surmise that Taran is to blame. As he attempts to throw Taran into the Cauldron, the Horned King is instead sucked in himself.

In the path to the Sierra game's best ending, Taran can instead use a magic mirror against the Horned King while he has the Black Cauldron. The sight of his reflection is so horrifying that the King leaps into the Cauldron out of terror.

The film version of the Horned King also played a role in the extinct attraction "Cinderella Castle Mystery Tour" in Tokyo Disneyland. His role in the attraction served as the finale, where guests have a final showdown against the forces of evil, represented by the Horned King using the Black Cauldron itself to summon the Cauldron-born. The tour guide would select a lucky guest to wield the Magic Sword, shooting a beam of light at the Horned King to banish him. The same guest would receive a medal, thereby dubbing him or her the "Hero of the Mystery Tour". The attraction served as the final level in the Super Famicom title "Mickey no Tokyo Disneyland Daibouken," with the finale of the stage being based on the attraction's finale, only with Pete replacing the Horned King.

The Horned King was also a popular boss character in games by Kemco and Sega.  In the first three titles in Kemco's Crazy Castle series, the Horned King served as the game's final boss. However, in the Western versions of the first two, Witch Hazel from various Warner Brothers cartoons took the role of final boss due to the games being themed to the Looney Tunes. In the third game, when it was released overseas as "Kid Klown in Night Mayor World," the titular Night Mayor took the Horned King's place as the final boss.

Sega, however, kept him in all versions of "Land of Illusion Starring Mickey Mouse" for the Game Gear and Master System. In this game, the Horned King appears as a Phantom stealing a magical crystal and plunging the Land of Illusion into chaos, populating the once peaceful kingdom with his army of monsters. The game's graphics depict him with black robes with purple and blue highlights and pale green bones, similar to concept art from the film.

One more appearance was in the Japanese mobile game "Disney Tsum Tsum" during a limited time event.

Outside of the games and the film, the Horned King made a few background appearances in the "House of Mouse".

Retrieved from "https://prydain.fandom.com/wiki/The_Horned_King?oldid=9811"
Community content is available under CC-BY-SA unless otherwise noted.