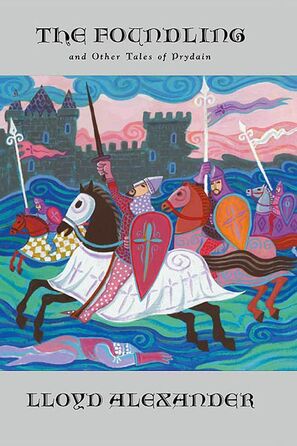 The Foundling and Other Tales of Prydain is a book of short stories by Lloyd Alexander, which take place in Prydain prior to The Chronicles of Prydain. When first published in 1973, the book contained six stories; since 1983 the collection has included eight, adding "Coll and His White Pig" (1965), and "The Truthful Harp" (1967). Both of the latter were originally published as single titles, illustrated by Evaline Ness.

Mr. Alexander dedicated the book to "Friends of Prydain, who promised to read more if I would write more". 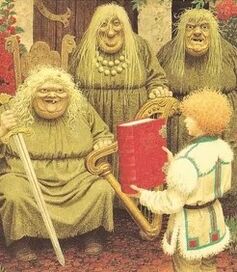 The first tale reveals how the enchanter Dallben was discovered as a baby by the three enchantresses, Orddu, Orwen, and Orgoch, in the Marshes of Morva. It expands on a story already recounted in The Black Cauldron, detailing how Dallben acquired The Book of Three, and how reading the histories and futures of men caused him first happiness, then a sadness so profound if caused him to age overnight into an elderly man. Dallben persisted in reading the book, "whatever it may hold," and so discovered birth, the turn of the seasons, and how each short life, while filled with pain, is a "priceless treasure". He discovered hope and that, "while nothing is certain, everything is possible".

The second story centers on a farmer named Maibon, who freed Doli of the Fair Folk from underneath a fallen log. By tradition, for the rescue Doli had to trade an object made by his crafty people. Maibon did not request the usual gold or jewels; he asked for the power to remain young. Doli tried to warn of "difficulties", but the man was insistent. After offering an old man a ride on his wagon, Maibon had decided he never wanted to grow old. Doli relented -- with cryptic but evident warnings -- and gave the farmer such a stone, which would keep its wearer from aging.

Delighted at first, Maibon soon discovered his crops did not grow, his trees did not fruit, his cattle did not calve; there was no food to feed his family, who were not aging or growing either; the baby was stuck teething! Mortified and feeling cheated, the farmer tried to bury the stone, smash it, toss it down a well, but it always returned to him. Furious, he began to bury the stone. Doli appeared, watching Maibon from a stump. The farmer reproached the dwarf, but Doli reminded he had tried to warn the man, and explained that the stone kept returning because Maibon did not truly wish to be rid of it. At last the farmer flung it down inside the stump as Doli suggested, and his family grew, his wheat ripened, and he aged proudly and contentedly for the rest of his days. 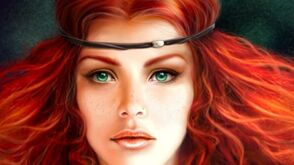 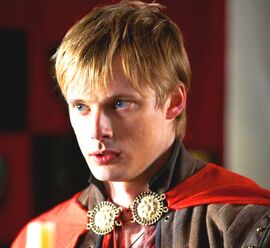 The third story spins a tale of enchantment, when Angharad, mother of Princess Eilonwy, was faced with a choice of suitors to marry. According to law of the House of Llyr, she was compelled to marry a man who had been born an enchanter. Unimpressed with the first two magicians, she fell in love with the third man, Geraint, who while incapable of wielding magic, used sleight of hand and a charming showmanship to delight Queen Regat, the other spectators and most especially Princess Angharad.

On learning Geraint was no true enchanter, she forbade the union compelling the enamored Angharad to elope. Her jealous suitors -- Grimgower and Gildas -- derided Geraint for his lack of power, but Angharad defended him as "the only true enchanter". The jealous sorcerers cast powerful spells to obstruct and harry the lovers, to no avail. The two clung to each other in the coldest storm, until they passed through it safe and warm. "And where they left footprints in the snow, flowers bloomed." 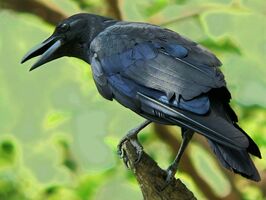 In the fourth story, Medwyn, who once built a ship and saved the animals of Prydain from a great flood, called the creatures to council and warned of a new danger. Arawn Death-Lord planned to enslave them all. Each kind of animal then explained how their kindred would help resist, but Kadwyr the crow mocked them one by one. He believed he was both safest and most capable, with his sturdy nest, speed aflight, keen eye and sharp beak. When the Chief Huntsman appeared, Kadwyr toyed with him, but carelessly broke a wing and was compelled to flee on foot. Kadwyr was saved in turn by gnats, spiders, and finally by a turtle, who helped by tripping the Huntsman off a cliff with his shell. Kadwyr came to see that all the creatures of Prydain depended on each other. He went on to take Medwyn's advice, and helped the other animals protect their home. In so showing his gratitude, the rascal crow was forgiven and welcomed by all the other beasts.

The fifth tale relates the dark origins of the sword Dyrnwyn, the most powerful weapon in Prydain; how its scabbard was blackened, and how it disappeared while in the possession of King Rhitta, who lived in Spiral Castle. One day in the heat of the hunt Rhitta trampled over a small farm. The shepherd there, Amrys, asked the King what he would do about the damage he had done to his homestead; as the King rode off, he promised he would fix it as soon as he had time. Some time later, the shepherd arrived at the castle, complaining that his sheep had gone lost during the battle, and asked King Rhitta to find his sheep and fix his farm. The King declared he did not have the time. The shepherd returned many more times, telling the King to keep his promise. On the final visit, as Amrys explained that his last lamb had escaped and died. In a rage King Rhitta unsheathed Dyrnwyn and chopped off the shepherd's head. Every night afterward Rhitta was haunted by the shepherd's ghost, and had chambers built farther and farther beneath the castle, and put guards with him as he slept, but the ghost still came. The blood stain on his sword could not be removed and spread to cover the whole blade with dark, black stains. When the heartless king forced the blade free, its power struck him and his guards dead. He lay as he fell, until many years later Taran found the chamber and Eilonwy removed Dyrnwyn.

The Smith, the Weaver, and the Harper

The sixth tale tells how Arawn ventured from Annuvin in human disguises to steal the magical equipment used by Prydain's greatest craftsmen. He tricked Iscovan the smith into trading his hammer, and Follin the weaver his shuttle. Yet Menwy the Bard was able to perceive the truth, and declined to trade his harp. Arawn struck and shattered the instrument, destroying it forever. Menwy laughed in defiance. "The Lord of Death fled in terror of life."

The seventh story -- first published in 1967 as a 32-page picture-book -- relates how Fflewddur Fflam ruled a tiny kingdom, where he 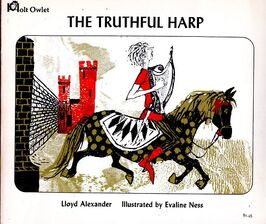 was more friend than ruler. He studied to be a bard and boasted his knowledge and prowess, but despite his best intentions before the Council of Bards, he failed the oral exam and fumbled his harp, which shattered. He departed with an enchanted harp and "much to learn". As he wandered, he gave his cloak to a poor man despite the cold, saved a child from a river in flood at risk of his own life, and rescued from ambush a lord who had previously beaten him.

On his return to the Council, he belittled his own good deeds, thereby discovering that a harp-string snapped whenever he stretched the truth. Chief Bard Taliesin counseled that his true deeds were better than his "gallant fancies". Fflewddur declared he would never lie again; all the strings tensed at once before he modified his pronouncement to a more modest confession that he had learned his lesson... though not forever.

Coll and His White Pig 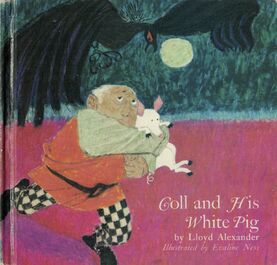 This eighth and final tale -- first published as a 32-page picture-book in 1965 -- tells of how Coll the warrior had retired to a life of farming, 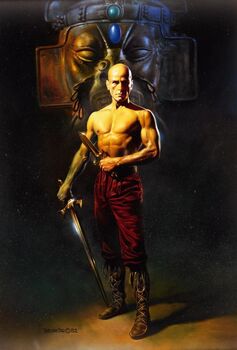 when horsemen stole his white pig Hen Wen. Coll pursued them on foot until he had to rest under a hazelnut tree. He ate some of its nuts and found he had acquired the ability to talk to animals. He rescued a baby owl and learns from its father that every nut he has eaten is "a day given you to understand the speech of birds and animals". The owl joined his quest, as did, in their turn, the stag and mole which he rescued along the way. Together they found Hen Wen captive in a pit of Annuvin, where the owl and stag led away the hunting birds and horsemen of Arawn. 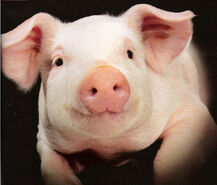 Coll jumped into the pit, and escaped with his pig through a tunnel dug by thousands of moles. He realized Hen was more special than he had thought, but by then Coll had lost the ability to speak to beasts. Back home, he was astonished to find his fields and gardens had flourished, for the enchanter Dallben had moved in during his absence.
Retrieved from "https://prydain.fandom.com/wiki/The_Foundling_and_Other_Tales_of_Prydain?oldid=9737"
Community content is available under CC-BY-SA unless otherwise noted.