The Flame of Dyrnwyn is the eighteenth chapter in The Book of Three. Here is the climax of the book, in which all the action and characters previously established dovetail into a series of interconnected, resolvent moments. Similar to what JK Rowling did years later in the Harry Potter series, the climactic events are confused and overwhelming; only in a subsequent chapter are the whirlwind events explained. 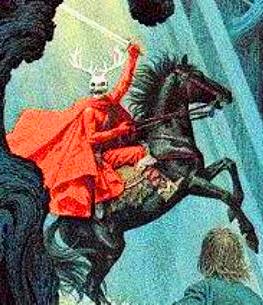 The scouts of the Horned King's army spotted the Companions, who repelled the outriders and continued to Caer Dathyl, but could now hope to reach it only barely ahead of the army. Vanguard troops approached them; Fflewddur ordered Taran and Eilonwy ahead on Melyngar while he, Doli and Gurgi stood to fight. 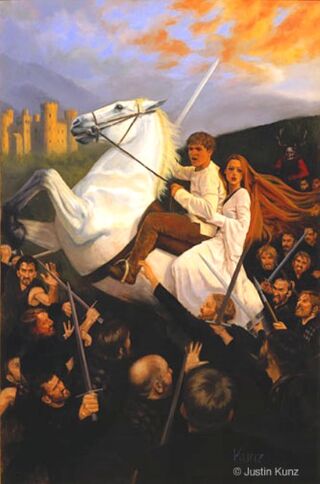 Melyngar carried Taran and Eilonwy straight through a party of foot soldiers, but the Horned King saw them and gave chase. The skull-faced warlord caught them at the top of a hill, and broke Taran's sword on the first blow. Taran seized Dyrnwyn from Eilonwy, but lacked the "noble worth" needed to draw it. Exposing only a part of the blade, white flame burned Taran's arm but threw him to the ground and momentary safety. Just before losing consciousness, the Assistant Pig- Keeper saw another man in the trees and heard an unintelligible word. The Horned King's mask melted and the war leader burst into flame.

Retrieved from "https://prydain.fandom.com/wiki/The_Flame_of_Dyrnwyn?oldid=9736"
Community content is available under CC-BY-SA unless otherwise noted.