This page is about the book chapter. For the villainous character see Arawn Death-Lord.

The Death Lord is the nineteenth chapter of The High King. Here is the climax of the action, the resolution of the major conflict not only of this book, but of the entire five-book series. The hero is given the opportunity to fulfill every goal of heroism he ever envisioned for himself as a youth, and to bring about the downfall of every antagonist in the story. 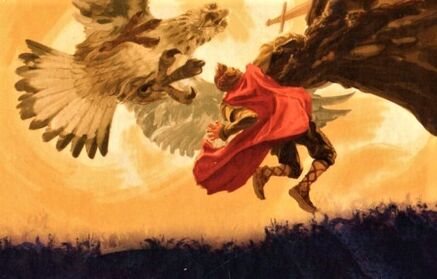 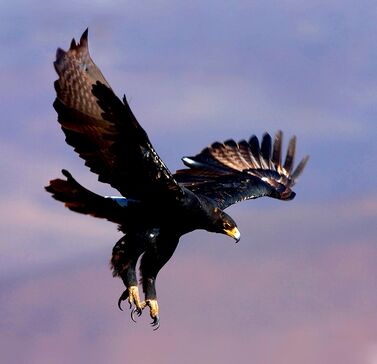 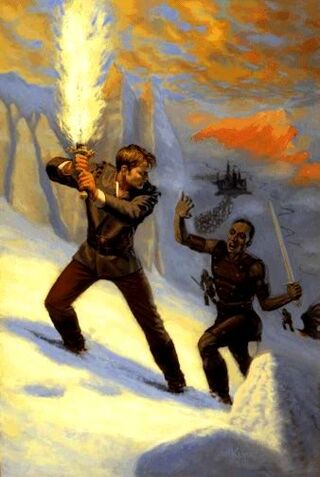 The gwythaint grabbed Taran with its beak but rather than kill him, it pulled him from the ledge to safety at the summit of Mount Dragon. Taran realized this was the Gwythaint Fledgling he had once nursed back to health. As three Cauldron-Born warriors beset him, he sought a weapon and heard the wind keening through holes in a large stone. 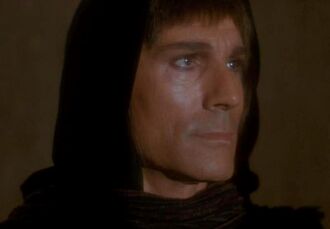 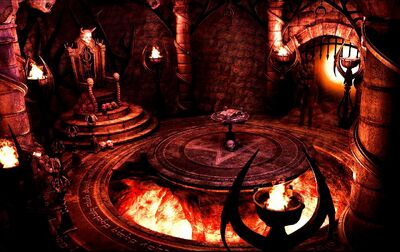 He wrenched the boulder free, toppling two of the warriors; in a hollow he found the sword Dyrnwyn, seized the blade and with it pierced the breast of the Cauldron warrior, killing it instantly and causing all the other Cauldron-Born to die with a final shriek. The Commot men followed Taran into the courtyard towards the Great Hall beyond, where Prince Gwydion commanded Taran to sheathe the blade lest it cost him his life!

Taran obeyed but quickly deduced that the man, with his harsh speech and manner, was not the Prince of Don. Taran tried to strike, but too late! Arawn turned into a shadow and vanished. In the Great Hall, Magg imposed himself upon Arawn's throne, and essayed to don The Iron Crown of Annuvin, but the enchanted crown melted his skull.

Following the chaotic defeat of Arawn's forces, the Companions gathered before the Great Hall. Achren identified Arawn in the form of a serpent, which reared to strike Taran; the silver-haired enchantress moved to intercede. The serpent struck her fatally, but Taran quickly cleaved it with Dyrnwyn. 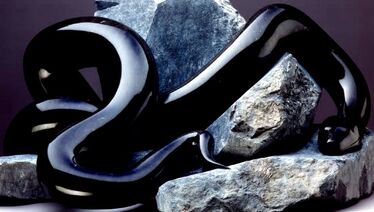 The serpent's shape blurred and was replaced first by a black-cloaked man, whose head rolled face-down, then by a shadow which sank into the earth. The white flame that emanated from the black sword began to fade, losing its ancient enchantment. The stronghold of the Death-Lord burst into flames and fell to ruin. Princess Eilonwy, employing her bauble, and Chief Bard Taliesin were able to read the old inscription on the scabbard:
"Draw Dyrnwyn, only thou of noble worth, to rule with justice, to strike down evil. Who wields it in good cause shall slay even the Lord of Death."

Retrieved from "https://prydain.fandom.com/wiki/The_Death-Lord?oldid=9735"
Community content is available under CC-BY-SA unless otherwise noted.