This page is about the novel. For the ruined fortress itself, see Caer Colur. For more book covers of The Castle of Llyr novel, see Book Editions and Cover Illustrations: Part 1.

The Castle of Llyr is the third book in The Chronicles of Prydain series by Lloyd Alexander. It is the most traditionally romantic episode of the Chronicles, with the protagonist pursuing a damsel in distress and wishing to express his feelings for her. At the same time, the plot is a classic mystery, which the ensemble characters work to solve. Themes of the fortuitous accident, of magic enhancing already inherent traits, and of music soothing the savage breast may lift the reader's spirit. Revenge and power-hunger are further touched on, as are thwarted dreams and the challenges of the onerous oath. 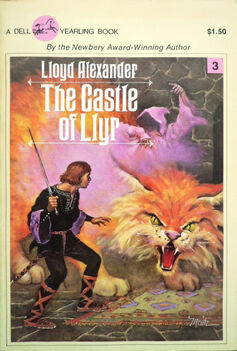 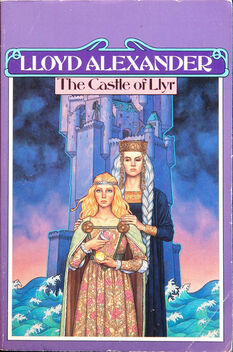 Princess Eilonwy traveled to the Isle of Mona to learn how to be a proper lady. Before she could even begin she was kidnapped by the enchantress Achren, and it fell on Taran and his Companions -- including Prince Gwydion and Prince Rhun -- to save her. During the search the companions ran afoul of a giant cat, Llyan, and the potion-making enchanter who enlarged her, Glew, who had been trapped by his own sudden growth in an underground cave. Here he schemed to trap the companions, and invited one of them to give up his life to make a shrinking potion. 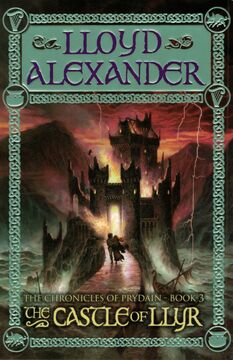 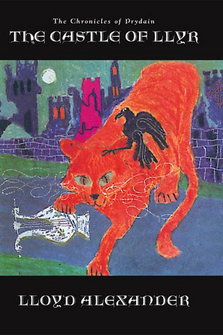 Following their escape through the heroism of the otherwise luckless Prince Rhun, Taran and the companions re-united with Prince Gwydion who led them in a covert invasion of the ruined island castle, Caer Colur, in order to retrieve Eilonwy -- and confront the vengeful, power-hungry enchantress, Achren.

Retrieved from "https://prydain.fandom.com/wiki/The_Castle_of_Llyr?oldid=9634"
Community content is available under CC-BY-SA unless otherwise noted.