This article is about the book chapter. For the enchanted item, see Brooch of Adaon.

The Brooch is the ninth chapter in The Black Cauldron. One of the most tragic turns in the series occurs here. In its wake, for the first time a new theme, that of achieving a wondrous deed to the admiration of one's peers, is introduced. At the same time the story goal is recalled, and the protagonists' journey to pursue it continues apace. 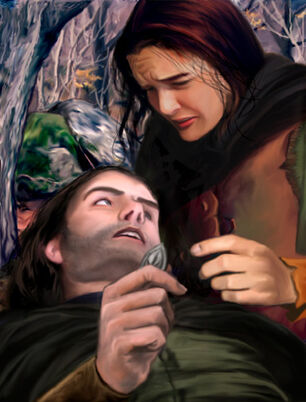 Fflewddur Fflam and Doli, knowing that Adaon was wounded, ran from the battlefield to keep the Huntsmen of Annuvin away. Taran, Eilonwy and Gurgi took Adaon to a safer location. They stopped at a quiet glade, where Adaon asked to be put down. Too late, Taran realized the place was the restive scene of which Adaon had dreamed. Adaon revealed he had known all along that this would be his resting place, and, just before he died, gave Taran his brooch to wear. 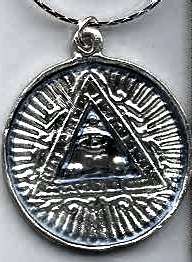 The companions buried Adaon and rested until dawn. Taran dreamed that night, a confused mix of images. At dawn, with no sign of Fflewddur or Doli, the Companions moved on, heading towards the Marshes of Morva. As they went on, Taran noticed he was more aware of everything around him -- a gift of enhanced perception, given by the enchanted brooch. Soon the group found Fflewddur, in a scene reminiscent of a dream Taran had had; the bard admitted he was entirely lost. Taran led the Companions onwards; they soon came to a meadow. Taran spotted a bird circling overhead, and declared they must follow its path; he had dreamed of the bird the night before.

Taran explained to Eilonwy the gift of the brooch. She believed him, saying it gave him a kind of wisdom, "which is what Assistant Pig-Keepers need more than anything."

Retrieved from "https://prydain.fandom.com/wiki/The_Brooch?oldid=8616"
Community content is available under CC-BY-SA unless otherwise noted.