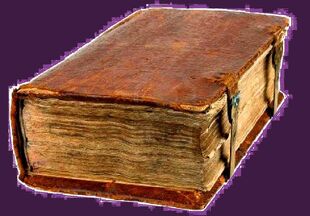 The Book of Three was a "ponderous, leather-bound volume" owned by the enchanter Dallben, who kept it in his study in Caer Dallben.

The book was ancient and worn, and contained a record of the past, present and future of Prydain, though its knowledge of the future was ambiguous until a given event came to pass; as Dallben would later explain, the tome could also have been called a "Book of If."

Dallben chose the book out of three items offered to him by Orddu, Orwen and Orgoch, when he left their home in the Marshes of Morva, passing over a sword that could have made him a mighty warrior, and a harp that would have made him Prydain's greatest bard. Even then, he desired wisdom more than power or fame, and read the book incessantly as he left the Marshes. On completing it, he cried himself to sleep; the next morning, Dallben found he had been turned into an old man by the book's effects. 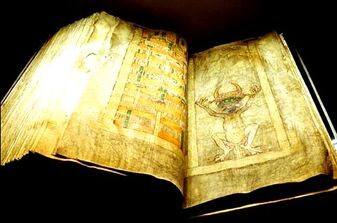 Only Dallben could safely handle the book. The well-meaning who tried to handle it (including Taran) would get a burning shock as though stung by a swarm of bees; those who intended outright evil could be destroyed by its power. The latter was the fate of King Pryderi, who was struck by lightning when he attempted to seize the book and destroy it.

Its pages included a prophecy as to who the first High King would be following the departure of the Sons of Don. Among its many mysterious secrets, the Book included the information that the crown would go to someone of no station in life. This hint was what led Dallben to adopt Taran, after finding him orphaned on a battlefield.

After Taran was proclaimed High King, Dallben gave him the book. It no longer prophesied future events, but was now a complete history of Prydain.

Retrieved from "https://prydain.fandom.com/wiki/The_Book_of_Three_(fictional)?oldid=8242"
Community content is available under CC-BY-SA unless otherwise noted.