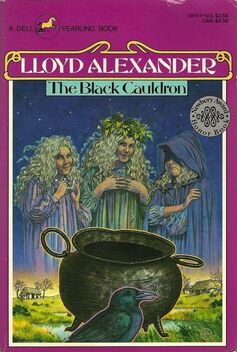 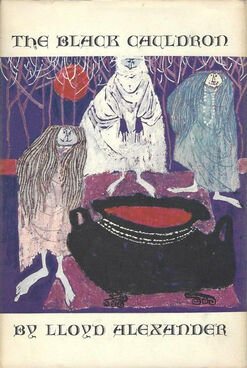 This page is about the novel. For the "foul pot" itself, see The Black Crochan. For more book covers of The Black Cauldron novel, see Book Editions and Cover Illustrations: Part 1.

The Black Cauldron is the second book in The Chronicles of Prydain series by Lloyd Alexander. It is an epic fantasy, in which the protagonists are embroiled in a grand struggle against evil, supernatural forces. Yet Alexander weaves into its story personal themes of oath-keeping, self-sacrifice, the distinction between honor and honesty, loyalty and friendship, and the consequences of over-reaching power-hunger.

At a council at Caer Dallben, Prince Gwydion explained to all the kings and war leaders assembled that Arawn Death-Lord was using the Black Cauldron to create more of the Cauldron-Born, deathless warriors. Gwydion's plan was to seize the Cauldron and destroy it. The plan proceeded apace, involving a diversionary military assault, until Doli discovered that the evil pot vanished. One of the Fair Folk disclosed that it had been taken by Orddu, Orwen, and Orgoch, and Taran, Eilonwy, Fflewddur and Gurgi set out to find it. 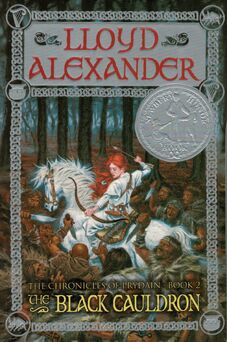 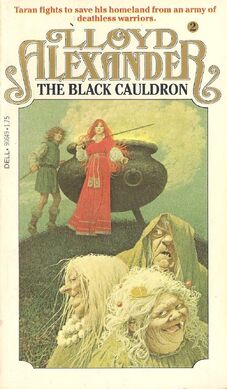 When they reached the Marshes of Morva, the enchantresses agreed to trade the Cauldron for a valuable item. Each protagonist in turn offered his most precious possession, but in the end Taran's desire to win the day compelled him to give up the Brooch of Adaon, an enchanted medallion that imbued him with great insight, in exchange. Yet the Cauldron was a terrible burden, and the only man who could help them lift it was Ellidyr -- a proud and arrogant prince who would claim all the glory of finding the Cauldron for himself. 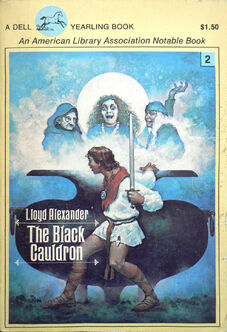 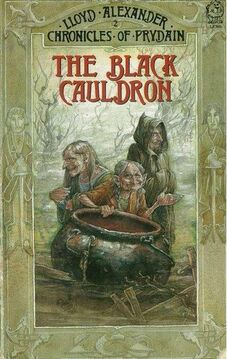