The Banner is the ninth chapter of The High King. Here the hero finds his new station as a war leader -- about which he dreamed as a boy -- to be a heavy burden. The thrill of battle is balanced by the despair of tragedy, and an interim goal is reached in safety, even as sadness for lives lost reminds the hero of his responsibility to those who serve him. 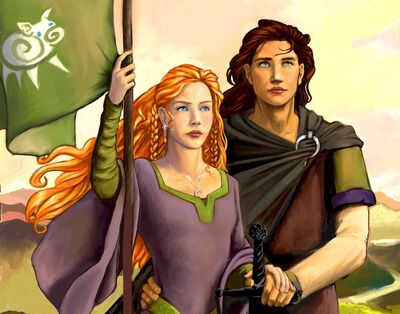 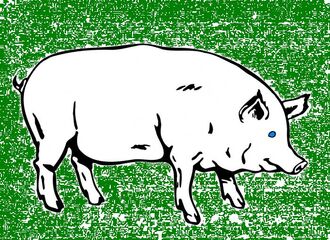 At the command of Prince Gwydion, Taran, Coll, Eilonwy and Gurgi traveled to the Free Commots under the (as yet unfinished) banner of the White Pig on a green field, designed and embroidered by Eilonwy. Taran mustered the Commot folk, relying on the friendship of Hevydd and Dwyvach to enlist their fellow smiths and weavers, and to work day and night to equip Taran's forces with weapons, armor and warm cloaks. Llassar and Llonio arrived from their own regions to join the growing army. The Commot folk rallied "to the banner of the White Pig because ... it is the banner of our friend Taran Wanderer". 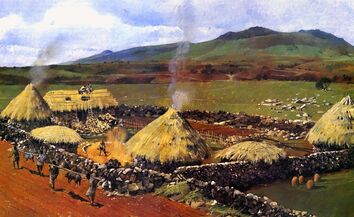 During a skirmish against raiders loyal to Arawn Death-Lord, Commot Merin -- the most beautiful of all the Commots -- was destroyed, and Annlaw Clay-Shaper, master artisan and Taran's close friend, was slain. 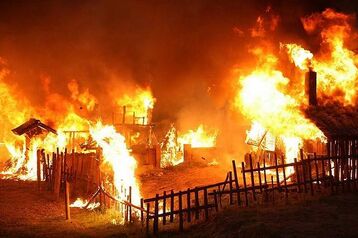 Taran took the catastrophe to heart and declared the blood of the village was on his hands. To Coll, Llassar observed: "[H]e who leads bears the wounds of all who follow him." Taran sent his main force marching in groups to Caer Dathyl, then followed through the Llawgadarn Mountains with a band of horsemen, his closest advisors and his own dear companions. Marauders beset them on the journey, but after showing 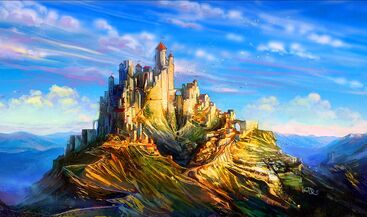 their skill at arms Taran's force was harassed no longer. They arrived at Caer Dathyl at the same time as the host of Fflewddur Fflam, who had also brought Glew with him (having no heart to send him away during wartime), and cheered the company with a song from his harp as they approached the golden city of the Sons of Don.

Taran's heart leapt, not at seeing the emblem of the Golden Sunburst or the banners of those come to serve High King Math, but at the knowledge that his friends and his forces were safe -- for the time being. Yet he could not help but think of King Rhun in his barrow at Caer Cadarn, and of Annlaw. Even as he entered the fortress, Taran clenched his fingers around a shard of pottery he had taken from his friend's demolished hut.

Retrieved from "https://prydain.fandom.com/wiki/The_Banner?oldid=7754"
Community content is available under CC-BY-SA unless otherwise noted.