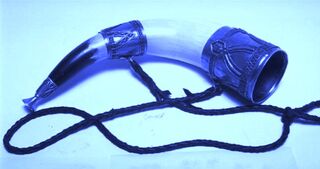 Taran's Battle Horn was a silver-braced war horn given to him by Princess Eilonwy.
This page contains spoilers. If you do not wish to be spoiled, do not read further.

After the sinking of Caer Colur, the horn washed up on the shore near Taran and Eilonwy, who were exchanging pledges to remember each other during their coming 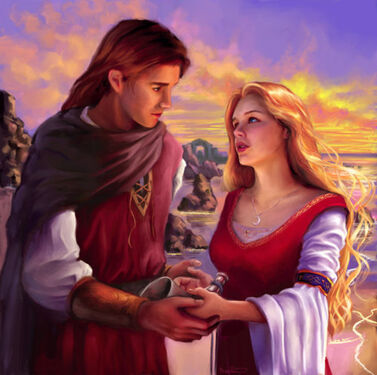 separation. Eilonwy saw the horn and declared that it was all that was left of her heritage in the House of Llyr. That dynasty had ruled from Caer Colur and had woven many wondrous enchantments there. She gave the horn to Taran to remember her by.

After Taran defeated Morda, the dwarf Doli of the Fair Folk noticed the horn and said it was Fair Folk craftsmanship. He inspected the item carefully and informed Taran there was but one "call" left in it -- a magical summons of the Fair Folk, for urgent aid.

Taran debated using the horn during his encounter with Dorath but deferred the chance, and so lost his sword as well as his dignity. Later, when Craddoc was stranded on a perilous ledge, Taran sounded the horn and so called the Fair Folk to rescue the crippled shepherd.

Retrieved from "https://prydain.fandom.com/wiki/Taran%27s_Battle_Horn?oldid=9357"
Community content is available under CC-BY-SA unless otherwise noted.