Taran of Caer Dallben, also called Taran Assistant Pig-Keeper and later, Taran Wanderer, is the fictional protagonist of Lloyd Alexander's The Chronicles of Prydain series of books. Taran was a young man in late adolescence through early adulthood, who lived with Dallben the aged enchanter, and Coll, the stout warrior-turned-farmer. Taran was charged with taking care of the oracular pig Hen Wen, and throughout the events of the series was known under the title "Assistant Pig-Keeper".

Taran's age is never given in the series, though at the outset he seemed to be approximately thirteen years old. Nor are readers provided much description of the character's appearance, except hints that he was tall and strong, if somewhat skinny. As a result, Taran has been depicted in a variety of ways. In Evaline Ness's original 1960s cover illustrations, as in the 1990s covers by Jody Lee, Taran is depicted with lanky black hair. In Don Maitz's 1970s covers Taran's hair is wavy brown. In the early 1980s covers Taran's hair is shaggy and golden blonde. In the 1985 Disney film The Black Cauldron (see downpage), he has reddish-brown hair and brown eyes, and seems of about fourteen years of age. For all we may know, however, Taran could have been black, brown, pink, golden-yellow or red as clay. He is an every-boy. 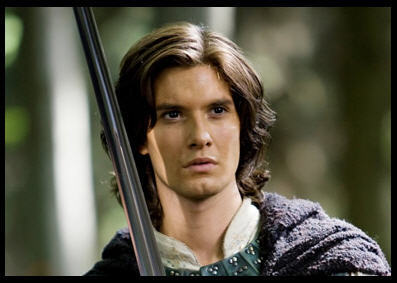 Taran was courageous, though occasionally (in his early youth) rash and foolhardy. He harbored an intense desire to prove his worth and heroism through noble and warrior-like acts. Personal honor, adhering to oaths and upholding a basic morality were also uppermost in Taran's mind and heart. He was sometimes seen to doubt himself in making important decisions. Indeed, much of the series centers on Taran's search for, and validation of, his own worth -- as seen by both himself and others.

Taran was a foundling of unknown origin, discovered by Dallben the Enchanter amongst the slaughter on a battlefield. Dallben brought the baby to be raised and educated at a small farm called Caer Dallben, where the wise old man would protect him and educate him on laws and politics; while Coll, the warrior turned farmer, would give Taran a practical education in planting, harvesting and animal husbandry. As Taran grew up he became restless and longed for adventures beyond the borders of the farm. His time would eventually come when, directly after being granted the position of Assistant Pig-Keeper to Hen Wen, an oracular pig, the animal escaped her enclosure. Taran followed her and soon found himself caught up in a wider conflict that would determine the fate of the land of Prydain. 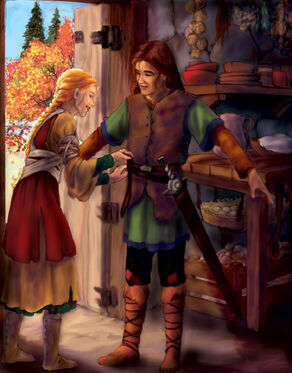 During his adventures Taran was befriended by the great Prince Gwydion Son of Don. After the two were captured by the Enchantress Achren, Taran met Princess Eilonwy, who freed the ancient, magical sword Dyrnwyn from Achren's clutches, an event that would set in motion a war that would bring about the defeat of Arawn Death Lord. Taran was assisted in his many quests by several friends, called the Companions, including the self-styled bard/king Fflewddur Fflam, the shaggy creature Gurgi, and the stalwart dwarf warrior, Doli. 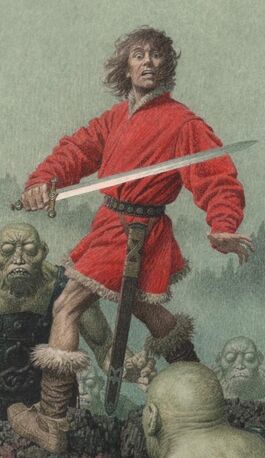 Taran's adventures found him leading armies against Arawn, meeting a trio of witches, attempting to rescue the kidnapped Eilonwy from Achren's clutches, and struggling to come to terms with his own mysterious past. Eventually he proved his worth, both as a warrior and a man, and did his part in the defeat of Arawn following a pitched battle. With the Lord of Death's defeat, most of Taran's Companions had to journey to the Summer Country where they would be granted eternal youth and happiness. Invited on the voyage, Taran asked for Eilonwy's hand in marriage; yet soon, after reflection, he made the hard decision to stay in Prydain, to rebuild the country and society that had nearly been destroyed. Dallben warned Taran that he would give up eternal happiness for a difficult life that might end without any acknowledgement of his efforts. Taran remained steadfast in his decision. Eilonwy, descendant of enchanters, was bound to the journey along with all those of magic lineage.

With this decision, Dallben and Gwydion revealed to Taran that he had earned more than his honor; he had earned the title of High King of Prydain. Taran, through his own choices, had fulfilled a prophecy from The Book of Three which foretold that a boy of no known birth would rise up and, after defeating a serpent (a form taken by the Death Lord), choose a kingdom of sorrow over a kingdom of happiness. Taran, the sole survivor of a long-ago battle, had done all of that, and thereby proved his worth as the next High King. With Eilonwy as his Queen, Taran assumed the throne of Prydain, and ruled with justice and wisdom till the end of his days. 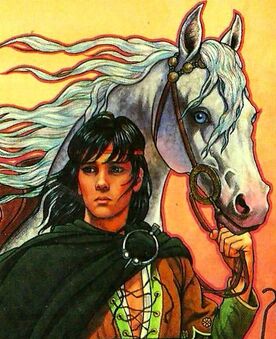 In all the trials that Taran had to face, he always found he had to "let something go". In The Book of Three he felt compelled to quit his own quest to save Hen Wen in order to alert the Sons of Don of impending peril. In The Black Cauldron Taran chose to exchange a magical brooch of wisdom for the Black Crochan, and later surrendered even the honor of capturing the deadly Cauldron so that he could transport it to be destroyed. In The Castle of Llyr he had to give up Eilonwy, albeit temporarily while she was fostered in a royal court; and in Taran Wanderer, he gave up his quest to learn his parentage in deference to the shepherd who pretended to be his father. In The High King Taran was forced to decide between his mission and his search for Eilonwy; in the end he was given a momentous choice to give up eternal life in order to rebuild Prydain.

Taran, in somewhat altered form, is also the hero of the 1985 animated film, and the associated 1986 game, both of which were loosely based on the first and second novels in the series, The Book of Three and The Black Cauldron. Taran's story has a somewhat different meaning; Taran's arc throughout the film is realizing that he may actually not be born to be a hero or a great knight, as had been his ambition, and thus learning humility. This arc comes to a close when Gurgi (whom he treated as a rather pathetic sidekick) proves to have been far braver and more heroic than he, by choosing to sacrifice his life to stop the Black Crochan.

The manual of the Sierra game adaptation states that he was found by Dallben near a battlefield, unable to tell where the infant's social standing was or who his parents were among the bodies. Through the use of the game's multiple endings, it is possible for Taran to receive one of many rewards from Orddu, Orwen, and Orgoch, including a shield that never breaks, a magical harp that would make him the greatest bard in all of Prydain, an armor suit of invincibility, or to reclaim the Magic Sword... but only if Gurgi survives.

The name Taran, like so many others in The Chronicles of Prydain, appears in the collection of Welsh legends known as the Mabinogion, specifically in the tale "Branwen Daughter of Llyr". There a character called Gluneu Eli Taran (or Glinneu/Glifieu son of Taran) is listed as one of the seven men of Britain who survived an invasion of Ireland under Bran to retrieve the Cauldron of Life. In the Chronicles, however, Taran of Caer Dallben's role seems to be based on another figure from the Mabinogion: that of of Pryderi, the son of a king raised anonymously by farmers before discovering his birthright. 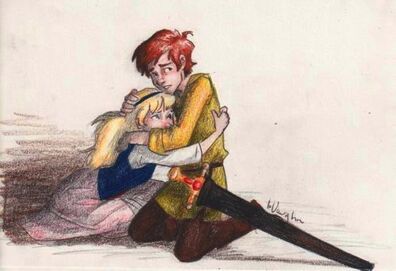 Taranis was also a Gaulish thunder god associated with the wheel. Taranis, along with Esus and Toutatis as part of a sacred triad, was mentioned by the Roman poet Lucan in his epic poem Pharsalia as a Celtic deity to whom human sacrificial offerings were made. Jacob Grimm, in his Teutonic Mythology, wrote:

"Now with this Donar of the Germani fits in significantly the Gallic Taranis whose name is handed down to us in Lucan 1, 440; all the Celtic tongues retain the word taran for thunder, Irish toran, with which one may directly connect the ON. form Thôrr, if one thinks an assimilation from rn the more likely. But an old inscription gives us also Tanarus (Forcellini sub v.) = Taranis. The Irish name for Thursday, dia Tordain (dia ordain, diardaoin) was perhaps borrowed from a Teutonic one."

Regarding Taran's age, in 2005 Prydain Wiki contributor S-Man-X-Men6 wrote to Mr. Alexander: "Well, many people wonder what exactly Taran's age is in the books." Mr. Alexander responded: "[A]round 15-16 years old in the beginning and around 21 at the end." This starting age for Taran seems somewhat older than what many readers believe; given Taran's rash, excitable behavior in The Book of Three, he seems to be about thirteen.

Regarding Taran's physical appearance, it's reasonable to conclude that Taran's hair was brown, rather than black or red or blonde, because characters with all these other hair colors -- Adaon and Morgant, Eilonwy and Doli, Fflewddur and Rhun, respectively -- all have their hair color described. If Taran's hair color matched any of theirs, it seems reasonable that an association would have been made, as in, "Adaon's hair was black, like Taran's." Since author Alexander never makes any such association, it's at least possible that Taran's hair color was the only one never mentioned -- brown.

Retrieved from "https://prydain.fandom.com/wiki/Taran?oldid=9733"
Community content is available under CC-BY-SA unless otherwise noted.