The Real Prydain series consists of pages exploring the historical foundations of The Chronicles of Prydain. For more exploration of historical precedents for the fantastical land of Prydain, please see: Real Prydain: The Celts and Real Prydain: Ancient Tribes and Material Culture. 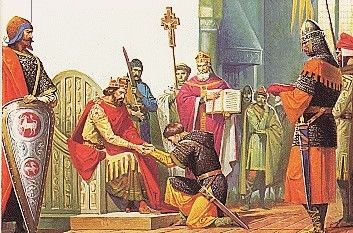 Feudalism was the historical system of socio-political practices that most closely matches the method of government described by author Lloyd Alexander in The Chronicles of Prydain. It can be defined as a reciprocal set of legal, economic and military obligations which existed among the warrior nobility, and revolved around the three key concepts of lords, vassals and fiefs.

These practices flourished in medieval Europe between the 8th and 15th centuries. In Prydain, feudalism seems to have been in place since ancient times, when King Rhydderch Hael ruled Prydain, and later King Rhitta ruled from Spiral Castle. The system continued later under the Sons of Don, who ruled from Caer Dathyl. 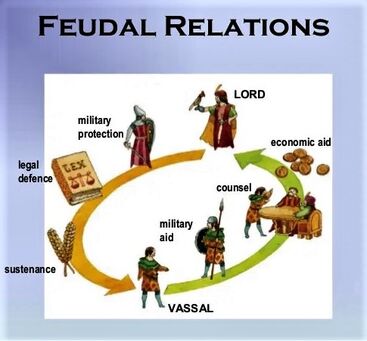 Fief: Land owned by the king and "held" or leased by a vassal.
Lord: An aristocrat, a member of an elite warrior society.
Vassal: A lord or knight who owed fealty to a king or to another lord.

In exchange for the use of the fief and protection by the lord, the vassal would provide some sort of service to the lord -- usually in the form of military aid, but also in political counsel and/or economic aid.

In the Chronicles, fiefs are called "cantrevs". Each cantrev was protected by a number of lords; the ruler of each cantrev was a king who owed ultimate allegiance to the High King of Prydain. For example, both Lord Goryon and Lord Gast were vassals of King Smoit, who was in turn a vassal of High King Math. 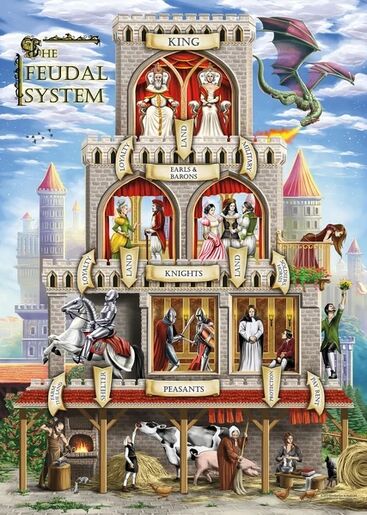 Under the English feudal system, the person of the king was the only absolute "owner" of land. All nobles, knights and other tenants, called vassals, merely "held" land on a perpetual lease from the king, who was thus at the top of the "feudal pyramid". These leases were inheritable from father to son or through other patriarchal lines of transference. Yet inheritance of land was not unconditional; before inheriting, the heir had to pay a suitable feudal relief.

Below the king in the feudal pyramid was a tenant-in-chief (generally in the form of a baron or knight) who was a vassal of the king, and holding from him in turn was a tenant -- generally a knight, sometimes a baron, including tenants-in-chief in their capacity as holders of other fiefs. Below the tenant, further tenants could hold from each other in series. The obligations and corresponding rights between lord and vassal concerning the fief form the basis of the feudal relationship.

Before a lord could grant land to a tenant, he had to make that person a vassal. This was done at a formal and symbolic ceremony called a commendation ceremony, composed of the two-part act of homage and oath of fealty. During homage, the lord and vassal entered a contract in which the vassal promised to fight for the lord at his command, whilst the lord agreed to protect the vassal from external forces, a valuable right in a society without police and with only a rudimentary justice system. 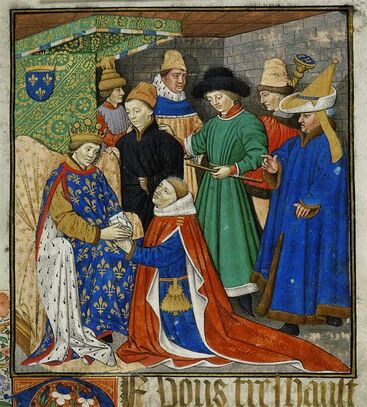 The word fealty derives from the Latin fidelitas, and denotes the fidelity owed by a vassal to his feudal lord. Fealty also refers to an oath which more explicitly reinforces the commitments of the vassal made during homage. Such an oath follows homage. Once the commendation was complete, the lord and vassal were now in a feudal relationship with agreed-upon mutual obligations to one another. The vassal's principal obligation to the lord was the performance of military service. Using whatever equipment the vassal could obtain by virtue of the revenues from the fief, the vassal was responsible to answer to calls to military service on behalf of the lord.

This security of military help was the primary reason the lord entered into the feudal relationship. However, the vassal had another obligation to his lord: attendance at his court, whether manorial, baronial or at the king's court itself in the form of parliament. This involved the vassal providing "counsel", so that if the lord faced a major decision he would summon all his vassals and hold a council. On the manorial level this might be a fairly mundane matter of agricultural policy, but also included the handing down by the lord of sentences for criminal offences, including capital punishment. Concerning the king's feudal court, the prototype of parliament, such deliberation could include the question of declaring war. 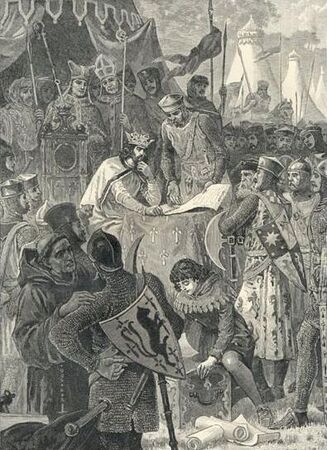 The phrase "feudal society" includes within the feudal structure not only the warrior aristocracy bound by vassalage, but also the peasantry bound by manorialism, and the estates of the Church. Thus the feudal order embraces society from top to bottom, though the "powerful and well-differentiated social group of the urban classes" came to occupy a distinct position to some extent outside the classic feudal hierarchy.

Manorialism or seignorialism was an organizing principle of rural economies which vested legal and economic power in a lord of the manor. He was supported economically from his own direct landholding in a fief, and from the obligatory contributions of a legally subject part of the peasant population under his jurisdiction and that of his manorial court. These obligations could be payable in several ways, in labor (the French term corvée is conventionally applied), in kind or in coin.

Manorialism originated in the Roman villa system of the Late Roman Empire, and was widely practiced in medieval western and parts of central Europe as well as China. An essential element of feudal society, manorialism was slowly replaced by the advent of a money-based market economy and new forms of agrarian contract. 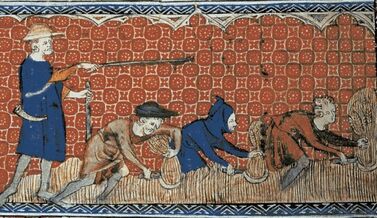 Most of the military aspects of feudalism effectively ended by about 1500. This was partly since the military shifted from armies consisting of the nobility to professional fighters thus reducing the nobility's claim on power, but also because the Black Death reduced the nobility's hold over the lower classes. Vestiges of the feudal system hung on in France until the French Revolution of 1790's, and the system lingered on in parts of Central and Eastern Europe as late as the 1850s. Slavery in Romania was abolished in 1856. Russia finally abolished serfdom in 1861.

Even when the original feudal relationships had disappeared, there were many institutional remnants of feudalism left in place. At an early stage of the French Revolution, on just one night of August 4, 1789, France abolished the long-lasting remnants of the feudal order. It announced, "The National Assembly abolishes the feudal system entirely."

Originally the peasants were supposed to pay for the release of seigneurial dues; these dues affected more than a quarter of the farmland in France and provided most of the income of the large landowners. The majority refused to pay, and in 1793 the obligation was cancelled. Thus the peasants got their land free, and also no longer paid the tithe to the church.

Manorialism died slowly and piecemeal, along with its most vivid feature in the landscape, the open field system. It outlasted serfdom as it outlasted feudalism: "primarily an economic organization, it could maintain a warrior, but it could equally well maintain a capitalist landlord. It could be self-sufficient, yield produce for the market, or it could yield a money rent." The last feudal dues in France were abolished at the French Revolution. In parts of eastern Germany, the Rittergut manors of Junkers remained until World War II. In Quebec, the last feudal rents were paid in 1970 under the modified provisions of the Seigniorial Dues Abolition Act of 1935.