Princess Eilonwy daughter of Angharad, daughter of Regat, was an outspoken, feisty and kind-hearted Princess of the Royal House of Llyr, who was capable of performing minor enchantments and of holding her own in a fight. She befriended Taran of Caer Dallben when they were both kept prisoner, each in their own way, at Spiral Castle.

Eilonwy's father Geraint was a commoner; her mother Princess Angharad was evidently never fully trained as an enchantress. As a daughter of the House of Llyr, Eilonwy wore a pendant shaped like a silver crescent moon, her family emblem. She also carried a golden sphere which she called her "bauble", yet which was secretly a potent magical item. 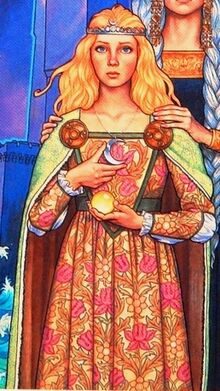 Eilonwy had long, red-gold hair, bright blue eyes, and a melodic, youthful voice; her cheekbones were high and her features "elfin". She often wore a simple white robe, and carried her golden bauble and wore her silver crescent at all times. Her soft, feminine qualities lent a false impression of a damsel-in-distress who needed a strong male hero to save her, but this presumption could not have been further from the truth. She was obstinate, outspoken, contentious and fiery when roused to anger. But she also cared deeply about animals and the suffering of people, and like Taran upheld a basic moral code. 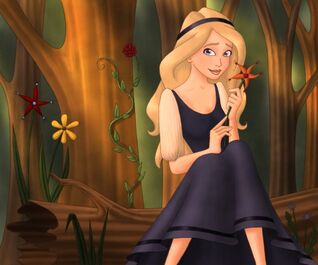 Eilonwy frequently employed unusual similes and metaphors, such as "If you don't listen to what somebody tells you, it's like putting your fingers in your ears and jumping down a well." She was also sharp-witted, strong-willed, and sarcastic. She often grew angry with Taran for reasons he did not immediately understand.

She seemed to prefer going barefoot over wearing shoes; prior to sending Eilonwy to her relatives on the Isle of Mona for a proper education, Dallben mentioned her "unshod feet". When she had to wear shoes, as in The Book of Three, they were invariably sandals.

Eilonwy was described as being perhaps one or two years younger than Taran, though fully as tall. Taran's own age is never given, but we can deduce from contextual clues that he was perhaps thirteen at the time of their first adventure together (see below). 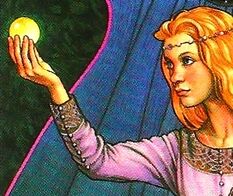 The women in Eilonwy's line were formidable enchantresses. She inherited this skill, most readily visible in her manipulation of an enchanted object she called her bauble a small sphere that glowed with golden light when activated by her will. Because her magical tutoring under Queen Achren was incomplete, her ability to perform magic was limited. Except for illuminating her bauble, she performed only three magical acts throughout the entire Chronicles of Prydain.

In ancient times, certain daughters of the House of Llyr called Sword Maidens did battle alongside the men. Eilonwy said little about her male ancestors, apart from asserting that they were war leaders. In her own words, “I am Eilonwy, daughter of Angharad, daughter of Regat, daughter of - oh, it’s such a bother going through all that. My ancestors,” she noted proudly, “are the Sea People. I am of the blood of Llyr Half-Speech, the Sea King.”

Eilonwy first appeared to Taran in the dungeons of Spiral Castle while he was prisoner of Achren. Eilonwy had dropped her glowing bauble into his cell and come looking for it. At first she seemed a chatty, easily-distracted girl, and Taran mistrusted her, but she soon rescued Taran and Fflewddur Fflam (the latter by mistake, since Taran believed Gwydion was imprisoned as well). 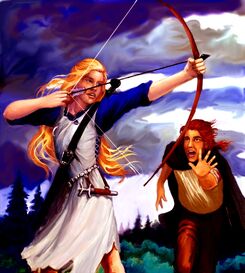 On their way out of the castle, they passed through a maze of underground passages and eventually reached a tomb from which Eilonwy extracted the enchanted sword Dyrnwyn. Eilonwy refused to allow Taran to examine the sword or draw it from its rune-inscribed scabbard; despite her incomplete magical training, she was knowledgeable enough to recognize that the sword was powerful and best left to the very wise.

Following the destruction of Spiral Castle, Eilonwy joined Taran, Fflewddur, and Gurgi on their journey to warn the Sons of Don of an impending attack by the Horned King. (Taran asked Fflewddur to return her to her kinsmen, but she refused.) Eilonwy tried to stop several Cauldron-Born with an enchanted arrow, but the spell failed. Captured by the Fair Folk, it was she who convinced King Eiddileg to give them Hen Wen, provisions, and a guide to Caer Dathyl, in the person of Doli. On the way, Eilonwy agreed with Taran's decision to rescue an injured Gwythaint Fledgling.

When the group was compelled pass through a valley with the Horned King's war band, Eilonwy rode with Taran on Melyngar and leapt at the Horned King to protect her friend. After Taran awakened in Caer Dathyl, Eilonwy -- who was at his side throughout his convalescence -- explained what happened and helped him recover.

Throughout the book, Taran presumed Eilonwy to be, apart from her enchanted heritage, an ordinary girl, and she made no effort to contradict the presumption. At the end of the story, however, Dallben revealed to him that she was, in fact, a royal princess, but nevertheless invited her to make her home in Caer Dallben. 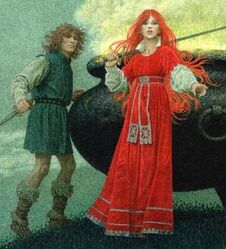 After Taran left Caer Dallben with Gwydion and the other war leaders and kings on the quest to destroy the Black Cauldron, Eilonwy and Gurgi followed the band who discovered them near Dark Gate. Later, in the Marshes of Morva, Eilonwy offered to exchange her precious bauble for the Cauldron but was refused by the three enchantresses. To Ellidyr she agreed to remain silent about who had truly won the Cauldron, but later, after he tried to kill the Companions, Eilonwy reneged on this pledge, and told King Morgant the truth.

Eilonwy was compelled to return to her family on the Isle of Mona, in order to learn to be a "proper princess". Here she was kidnapped by Magg and taken to Achren at Caer Colur. As matters developed, her "bauble" -- the magical ball that she could make glow -- was really the Golden Pelydryn, a magical artifact passed through Eilonwy's family from mother to daughter. We later discover that she was the last living descendant of the House of Llyr, and the only person capable of reading a tome of spells requiring the light of her bauble. This was the reason Achren had abducted her as a small child, and later bewitched the girl on Mona. Eilonwy, however, destroyed the book of enchantments, undoing Achren's hold on her and relinquishing the majority of her own potent powers. At the end of the story, Taran and Eilonwy make a pledge to one another never to forget each other. 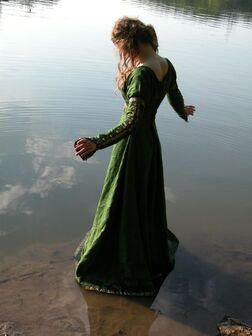 In this story, though Eilonwy did not appear, we come to understand the ultimate fate of Eilonwy's mother, Princess Angharad. Taran learned of this from Morda, the evil wizard who stole the dying Angharad's crescent moon pendant and used the jewel to evil ends. Whether Taran ever shared the fate of her mother with Eilonwy remains uncertain, though it seems likely that he refrained from doing so in an effort to spare her anguish. By this time Taran realized that he was in love with Eilonwy, but he was reluctant to act on his feelings because, having been raised as a commoner while Eilonwy was a royal princess, Taran felt he did not belong in her world. 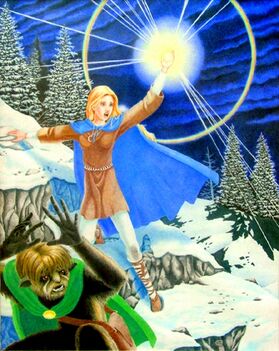 Taran and Eilonwy's feelings for one another are much more evident throughout the final book of the series. Although the two never spoke of these feelings until they were about to part ways forever, their interactions with one another were noticeably different from their previous quarrelsome relationship. Taran internally pined for Eilonwy, and feared for her safety in the midst of an escalating war. Eilonwy's change towards Taran was more subtle, yet no less certain, and is experienced perhaps more gradually over the course of the entire series, in contrast with Taran's abrupt realization of his feelings towards the Princess in the first chapter of The Castle of Llyr.

At the end of the series, Taran became High King of Prydain. In order to marry Eilonwy, however, she had to renounce all her magical powers, since all magical folk were leaving for the Summer Country. The Chronicles concludes with an announcement to the people of the coronation and marriage of King Taran and Queen Eilonwy.

Among the short stories in this companion volume, in "The True Enchanter" we learn about the circumstances of Princess Angharad's elopement with the commoner Geraint. Although Eilonwy inherited her mother's red-gold hair and magical heritage, her intensely blue eyes came from her father.

In the 1985 animated film, which is loosely based on The Chronicles of Prydain, Eilonwy is voiced by Susan Sheridan. The film depicts her as a honey-haired blonde, wearing a pink and white dress with a blue bodice. She does not possess magic powers like her book counterpart. Here, her bauble is a semi-sentient object which floats through the air under its own power (whereas in the books, it is an orb of golden color, leaden when unlit, which must be carried). In the early character sketches Eilonwy was decidedly more unkempt, even shabby, and wore no shoes, but in the final film she is neatly attired and shod in sandals.

The name Eilonwy is not a historical Welsh name (unlike many others used in the stories), but Lloyd Alexander did not invent the name, as it turns up in a tale by Glasynys – published in Cymru Fu, or The Wales that Was (1862-4), and translated from the Welsh by Sir John Rhys in his Celtic Folklore (1901) – belonging to the daughter of a mermaid named Nefyn ferch Nefydd and her human lover Ifan Morgan. A poem by Talhaiarn also bears the name "Eilonwy". It may be based on the literary Welsh (i.e. obsolete) word eilon, meaning "deer, stag", or perhaps in reference to the river Elan in central Wales, with the fanciful suffix -wy (used in the 1800s to adorn river names) added for euphony. The name may be based on medieval Welsh names such as "Eilfyw" (m), "Eiludd" (m), and "Euronwy" (f), "Goronwy" (m), "Llifonwy" (m), "Tegonwy" (m). As the above examples show, the ending "-onwy" appears in both masculine and feminine names, so the name "Eilonwy" could be either masculine or feminine.

The Irish Princess Diahan, a character from Lloyd Alexander's 1963 novel Time Cat: The Remarkable Journeys of Jason and Gareth, served as a precursor for Eilonwy in both appearance and personality. The author introduces Diahan in Chapter 6 of that book, where he describes her as follows: "Red-gold hair tossed about her shoulders, reaching the belt of gold at her waist. She was... tall, slim, with tiny feet in sandals. ... [She] ran forward lightly, her blue eyes sparkling, and began talking as if she had no intention of stopping." Later her (torn) dress is described as a "white robe". Also like Eilonwy, Diahan is petulant but forgiving, stamps her foot when angry, looks at the hero "admiringly" when he does something she likes, and refuses to speak to him when he does something disagreeable... except to remind him, "several times", that she's refusing to speak to him.

Dafydd ab Hugh, the author of "Arthur War Lord" and "Far Beyond the Wave", admitted that the character of Princess Anlawdd from these novels was largely inspired by Eilonwy. She is described as talkative, red-haired, and wearing Roman-style sandals.

Retrieved from "https://prydain.fandom.com/wiki/Princess_Eilonwy?oldid=8435"
Community content is available under CC-BY-SA unless otherwise noted.