Prince Gwydion Son of Don was a mighty warrior and minor enchanter in The Chronicles of Prydain. Gwydion met Taran of Caer Dallben while the Assistant Pig-Keeper was searching for the oracular pig Hen Wen, whom Gwydion also sought. Bearing the title "Prince of Don" and the surname "Son of Don", Gwydion rode a white mare named Melyngar, and carried the legendary sword Dyrnwyn after it was given to him by Princess Eilonwy.

He was one of the Sons of Don, kin to High King Math and to Fflewddur Fflam, and a resident of Caer Dathyl.

Gwydion was a tall warrior with the "shaggy, gray-streaked hair of a wolf". His eyes were green, flecked with gold, deep-set in in a broad face weathered and darkened by sun and wind, and "grained with fine lines". He wore an intricately wrought belt buckle and a golden disc, shaped like the sun, on a chain around his neck. 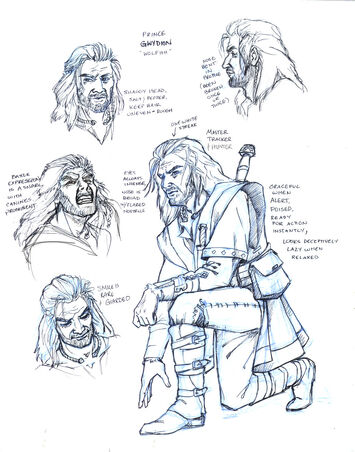 Gwydion was a model of unclouded heroism. In the Chronicles, his judgment was always rational and well-balanced, his manner kindly and benevolent; even his flashes of anger were righteous. Yet he was not without humor, revealing a wry and playful wit underpinning his dialogues with Taran. And while he was a superior warrior Gwydion did not always win his battles; both the Cauldron-Born and the Huntsmen of Annuvin managed to get the better of him during the Chronicles.

Gwydion was the "greatest war leader in Prydain". His knowledge of martial strategy and his keenness of intellect was evidently matched only by Dallben. Gwydion was well-seasoned in battle and his abilities in hand-to-hand combat were apparent in the rare cases of battle described throughout the books. He was also a capable tracker and woodsmen, able to discern Hen Wen's tracks from a trail of broken twigs and faint footprints, and a methodical searcher as he quartered a region he had designated for search, then laboriously inspected each square foot within each range. Further, Gwydion was an enchanter of some skill, able to cast a woven net of grass into an expansive web of thick, sticky rope. He had the power to speak with animals, exceeding even Dallben in this regard; and owing to his experiences under [{Achren]]'s tortures of the will, Gwydion had a profound understanding of the workings of life and death. 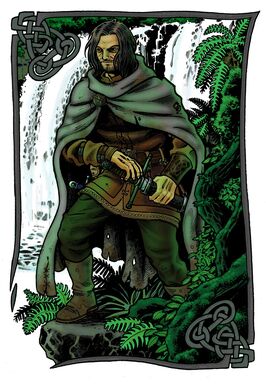 Gwydion encountered Taran in the woods outside Caer Dallben while the Prince of Don was traveling to meet with Dallben regarding the rise of The Horned King. At first Taran did not believe the man, who appeared travel worn and disheveled, was truly Gwydion; but on seeing the warrior's golden-pommeled sword the Assistant Pig-Keeper recognized him as the Prince of Don. Taran and Gwydion traveled together for awhile, seeking the oracular pig Hen Wen, yet soon they were assailed by Cauldron-Born in the service of Achren, captured and taken to Spiral Castle.

There, as Taran watched, Gwydion boldly defied Achren's efforts to enlist him into her service, enraging the sorceress until she broke his sword with her own bleeding hands. At first Taran believed Gwydion was imprisoned in an adjacent cell of Achren's dungeon, and later thought the Prince had died in the destruction of Spiral Castle. However, as we discover much later, Achren had the Prince of Don taken to a place of torture called Oeth-Anoeth, where his resistance to the harrowing tortures of body and spirit yielded in him a deep understanding "of life and death, of laughter and tears, endings and beginnings." Here Gwydion also gained the speech of all living creatures, and was able to flee his cell as if the walls themselves had melted.

At the climax of the story, Gwydion learned of Taran's location from the Gwythaint Fledgling which Taran had saved, and from Hen Wen the Prince discovered the Horned King's true name. In a forest grove Gwydion confronted the Horned King who was about to strike down Taran; the Son of Don spoke the skull-faced warlord's name, and thereby destroyed him.

Gwydion called a council of war to gather in Caer Dallben to plan the retrieval of the Black Cauldron from Annuvin. He planned to take a small number of men, including Doli, to the Dark Gate of Annuvin, where Doli would use his invisibility powers to sneak through the gate and let his companions in. The plan failed when they discovered that the Cauldron was no longer in Annuvin. Later alongside King Smoit Gwydion led an attack on the camp of King Morgant, who had seized the Cauldron for his own evil uses.

Gwydion discovered that Achren was still alive, and that Eilonwy was in grave danger because of her. He disguises himself as a shoemaker at Dinas Rhydnant to keep watch over her, but in spite of his and Taran's watchfulness she was kidnapped by Magg and taken to Achren. Gwydion trackws her to Caer Colur, the ancient seat of the House of Llyr, where he met Taran, Fflewddur, Gurgi, and Prince Rhun. All of them were soon captured by Achren, who tried to torment Taran into revealing the location of the Golden Pelydryn and the Book of Llyr. Instead, Gwydion revealed to her where the items were hidden; once in Eilonwy's hands, the girl broke Achren's spell over her and burned the book to ashes as Achren shrieked in defeat. Afterwards, Gwydion saved Achren from killing herself and suggested that Dallben would accept her at Caer Dallben.

Gwydion was tricked into an ambush, led by Arawn, in which he was badly wounded and the sword Dyrnwyn stolen from him. Barely surviving the ordeal, he then traveled towards Annuvin but was captured by Magg in the stronghold of King Smoit. After being freed by Taran, and on hearing the armies of Annuvin were on the march, Gwydion returned to Caer Dathyl. He led the forces in the defense of Caer Dathyl, to no avail. Gwydion became High King and led a successful assault on Annuvin itself. With magic gone from the land, Gwydion led the return to the Summer Country whence the Sons of Don had come long ago.

Gwydion ab Don is a major, largely villainous character in Welsh legend, as found in the collection called the Mabinogion, in medieval poetry and in several of the Welsh Triads. In the tale "Math Son of Mathonwy" Gwydion is a mischievous and dishonorable trickster, who betrays his own sovereign lord Math so that Gwydion and his brother Gilfaethwy can rape Math's virgin footholder, Goewin. Gwydion also arranges a war by stealing the swine of King Pryderi, and employs magic to sell illusory facsimiles of the pigs for his own gain. Math punishes the brothers by transforming them into various wild animals over a period of years.

Later Gwydion raises his sister Arianrhod's (illegitimate?) son Lleu Llaw Gyffes, crafts an enchanted wife for the youth, and goes on to help Lleu defeat the wife and her lover, thereby paving the way for Lleu to ascend the throne of Gwynedd (in northwestern Wales).

In a late 16th-century manuscript, Peniarth MS98, a summary of the earlier poem "Cad Goddau" provides details not found in the original poem:

The Triads name Gwydion as one of the "Three Golden Shoemakers of the Island of Britain", and records that Math taught him one of the "Three Great Enchantments". The Stanzas of the Graves record that Gwydion was buried at Dinas Dinlle, the city of Lleu. Othere references to Gwydion occur in several medieval Welsh poems, where he is often associated with his foster son Lleu.

Retrieved from "https://prydain.fandom.com/wiki/Prince_Gwydion?oldid=7266"
Community content is available under CC-BY-SA unless otherwise noted.