Orddu, Orwen, and Orgoch were the three powerful and mysterious enchantresses of the Marshes of Morva. Although their identities were apparently fluid and interchangeable, each of the witches had a distinctive appearance and persona: Orddu, the apparent leader, had tangled hair adorned with many ornaments and a decisive personality; Orwen wore a necklace of milky stones and was the most positive and cheerful of the trio; Orgoch was the least agreeable and the most threatening, with a black cowl that shadowed her face. 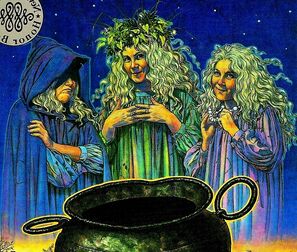 The three witches were the original owners of the Black Crochan. At some time in the distant past, they lent the Cauldron to Arawn, who in turn used the enchanted device to create an army of undead warriors, the Cauldron-Born. Later, the enchantresses reclaimed the Cauldron, but were nonetheless willing to relinquish it again in exchange for a magical price.

The three may be called witches or enchantresses, but otherwise were very mysterious beings; as one of the Fair Folk said to Taran, "It's more a question of what they are, not who they are." From day to night they changed from ugly, ancient hags into three beautiful young maidens. Orddu, Orwen, and Orgoch could also change into each other, swapping their identities among themselves as a mundane trio might trade hats. 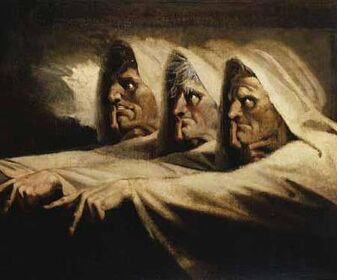 They evidently took delight in tormenting intruders into their lair, with talk of turning such unfortunates into frogs and stepping on them, smiling as though they spoke of jovial things. Orddu appeared to be the leader of the three, with a caustic wit and a low tolerance for deceit or antagonism; Orwen seemed the friendliest, the most given to mercy or compromise; while Orgoch was the most disagreeable and unpleasant -- neither of the other two sisters wanted to "be" her -- and the most threatening. Orgoch had a strong love for food, and apparently would devour anything on legs -- including, at one point, an infant. Despite their uncanny demeanor, the witches claimed not to be evil, but were interested in things as they are. Indeed they never did carry out their transformation threats, at least on Taran and his Companions. Is it possible that they saw in Taran the inherent propensity for heroism, leadership, even lordliness? 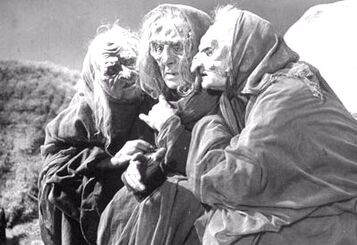 The enchantresses certainly expressed a dislike of the Cauldron-Born, claiming that Arawn had spoiled their Cauldron for any of its other purposes, and seemed pleased when Taran tricked several Huntsmen of Annuvin into sinking into a bog. It is further implied that the witches transformed several previous Huntsmen into animals. They deemed the act of stealing the Cauldron back from Annuvin to have been no trouble.

Their late-night weaving, along with hints of their powers, their great age, the shifting tapestry Taran saw at Orddu's wheel (concerning which see below), his feeling of having glimpsed something beyond his grasp, and their final "gift" to Taran all seem to imply that the women were some kind of cohesive entity, a triumvirate spirit being, even perhaps immortal. In some sense, it seems, they wove the fabric of people's lives during the age of enchantments in Prydain. 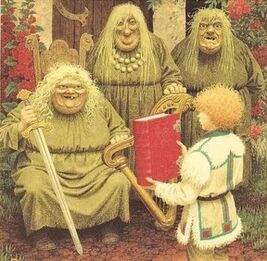 In the first, eponymous tale in this collection, it is revealed that the three enchantresses found Dallben in the marshes as a baby, and raised him as their own. However, when he a youth they were compelled to send him away after he accidentally ingested a potion that made him their equal in intelligence. As they said, it was too much wisdom under one roof. In parting, the witches offered the young man the choice of a sword -- with which he might have been the mightiest hero in Prydain; a harp -- with which he might have been the most famous bard; or The Book of Three, which would give him wisdom and understanding. He chose the latter and so, selected his destiny, though reading it aged him and bent his back. 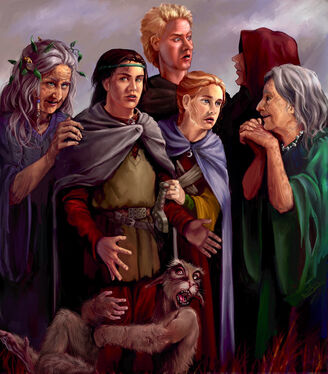 Taran and his friends traveled to the Marshes of Morva to find them, after learning that they are in possession of the Black Cauldron, which they were on a quest to destroy. The witches frightened and unnerved them, but then acted very polite after learning that "little Dallben" had sent them. The witches teased the group during the night by leaving the Cauldron for them to find, but enchanted so that when Taran and his friends tried to take it, they could not release it. After watching this, the witches released the companions, and agreed to sell the Cauldron. After asking absurd prices (such as memories or the North Wind) they proved to be satisfied with an enchanted brooch which Taran has inherited from Adaon. The enchantresses further warned that the only way to destroy the Cauldron was to have a living being voluntarily climb into it, well knowing he or she would perish in the act.

Taran traveled first to the Marshes on his quest to discover his parentage. Here for the first time Taran saw the three engaged in specific tasks: Orgoch carded wool, Orwen spun it into flax and Orddu, presumably, was to weave it into a finished tapestry, still on the wheel, which shifted in weird shapes of human and animals. As Taran could offer no payment, the witches refused to answer the question, even as Orgoch became more and more threatening. However, Orddu directed him to the Mirror of Llunet and left him with the advice that "The seeking counts more than the finding" and "every robin must scratch for his own worms". 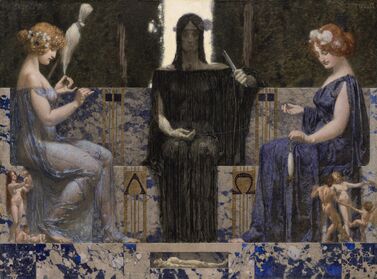 The witches make one final appearance near the end of the series, this time in the shape of beautiful maidens (a form only glimpsed in The Black Cauldron). They gave Taran a farewell present of an uncompleted tapestry which depicted his life's story. They told him that they would soon leave on a journey of their own. When Taran asked them to give him the answer of one final question as a last boon, they replied (a little sadly), "When in truth did we ever give you anything?" before vanishing. 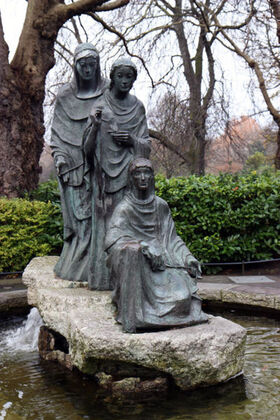 Lloyd Alexander explains in the Author's Note to Taran Wanderer that the three witches "appeared in other guises", including the "Norns [of Scandinavian mythology], the Moirae [of Greek], the Triple Goddess [of Celtic]" and other "transformations". Years later Alexander expanded the list to include the cauldron-stirring trio from Macbeth1. And while the author never names the British iterations, it's worth noting that in medieval legend the wounded King Arthur was cared for by three queens (one of whom was his sister, the sorceress Morgan LeFay).

As to nomenclature, the name Orddu appears in the Mabinogion, as a witch whose blood Arthur must acquire. Here she's called "the daughter of the witch Orwen of Penn Nant Govid, on the confines of Hell". Orgoch's name is not drawn from legend but may mean "blood-red sorceress" according to author Elizabeth Lane. 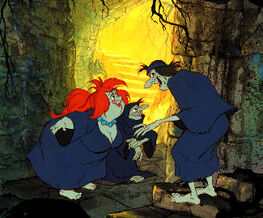 In the 1985 animated film, Eda Reiss Merin voices Orddu, Adele Malis-Morey voices Orwen, and Billie Hayes Orgoch. For reasons known only by the animators, Orwen is portrayed as being romantically infatuated with Fflewddur. As in the Chronicles, the witches serve as minor antagonists and comedy relief, but they are also helpful, providing information to the heroes about the powers of the Black Cauldron. However, at the climax they appear as huge, goddess-like beings, ensconced in cloud. They use their powers to bring Gurgi back to life, revealing themselves to be divine entities entirely apart from Lloyd Alexander's skein-weaving creations.

The movie further reveals a darker side to the witches' personality, albeit one used for comedic effect in their main scene. Namely, the trio share a penchant for turning people into frogs and eating them, having amassed a collection of victims which they keep stocked for mealtime. But while the Companions are in the cottage seeking the Cauldron, the amphibians escape! In turn, Orgoch morphs Fflewddur into a frog, and is about to eat him, when Orwen -- true to her amorous character as imagined by the Disney team -- intervenes to save the bard.

Retrieved from "https://prydain.fandom.com/wiki/Orddu,_Orwen,_and_Orgoch?oldid=9718"
Community content is available under CC-BY-SA unless otherwise noted.