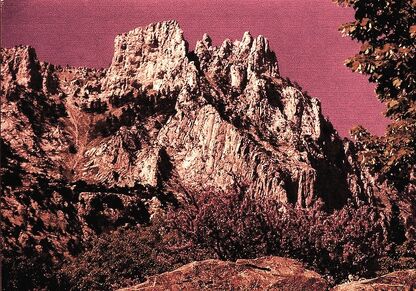 Mount Dragon was the highest peak of the Hills of Bran-Galedd which surrounded Annuvin and protected the Land of Death from invasion by hostile forces. This summit was formed by natural forces into "the rough shape of a monstrous, crested head with gaping jaws"; to either side of the draconian peak, "the lower slopes spread like outflung wings." The entire jagged mountain was comprised of "towering walls of sheer cliffs" which were dark and "mottled with patches of dull red".
This page contains spoilers. If you do not wish to be spoiled, do not read further.

A narrow, treacherous defile was the sole pass through or around Mount Dragon. Only Arawn Death-Lord, the sorceress Achren, Coll Son of Collfrewr, and Arawn's most trusted advisors knew the way through. This steep path skirted yawning chasms while chill winds blew, threatening to knock the unwary climber from the path. Overhanging shelves and arches blotted out the sky along this defile. Near to the peak, the path doubled back on itself so that progress toward the summit was slow, until a trail previously hidden by "grotesque formations of rocks" was revealed along a ridge, with the slope of the mountain dropping sharply below.

From this ridge, the dark towers and high walls of Annuvin itself could be seen, including the massive Iron Portals and the many courtyards of the Death-Lord's fortress, including the Hall of Warriors where once the Black Crochan had stood. Above and beyond this, Arawn's Great Hall stood, "glittering like black, polished marble" below the banner of the Death-Lord. A short downward slope, "clear and unhindered", led from the crest to the Iron Portals.

At the highest peak of the dragon's crest rose a tall rock. Here the wind blew through eroded crags and crannies, setting up a weird wailing. If one were to throw down the stone of the crest, one would find hidden, "as in a narrow grave" lined with flat stones, the Flaming Sword of Rhydderch Hael, Dyrnwyn.

Retrieved from "https://prydain.fandom.com/wiki/Mount_Dragon_(place)?oldid=7229"
Community content is available under CC-BY-SA unless otherwise noted.