Morda was an evil wizard who possessed a powerful enchanted object, which he used against the Fair Folk and which he planned to employ to gain mastery over humankind.

Morda had a gaunt face the color of dry clay, eyes which glittered like cold crystals, a jutting brow, bald skull, and his mouth was "a livid scar stitched with wrinkles". His eyes were lidless and did not blink. He spoke in a rasping voice like a dagger dragged across stone. Over a body wasted and skeletal, he wore a grimy, threadbare robe.

Morda was arrogant, sneering, proud and hateful when he was in control; and cowardly, cringing, obsequious and treacherous when under someone else's authority. He believed himself superior to human kind; though he had been born one of them his powers impelled in him a loathing of the ways of men.

Morda lived in a densely wooded region of the Hill Cantrevs, in an ill-shaped hut of low, rough stone roofed with sod, which squatted amidst black turf and rank weeds. Surrounding this dwelling, which resembled an animal den, was a dense and tangled wall of thorns, twice as tall as a man, which bristled with "spines sharper than the talons of a gwythaint". The screen was impassable and invulnerable to sword or axe; any would-be intruder was compelled to climb over it, invoking a further enchantment: that of slip-nooses of finely knotted cords, which twined themselves around trespassers' bodies and flung them over the wall. 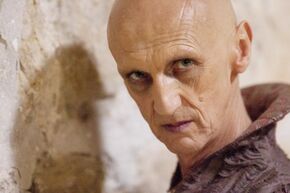 Morda acquired a crescent moon pendant from Princess Angharad of the House of Llyr, the mother of Eilonwy, who had come to Morda's doorstep in a weak and desperate state, seeking help in her search for her missing daughter. Angharad had offered the pendant with its clear gemstone in exchange for shelter and aid; Morda simply took the jewel and left her to die. Morda employed the enchanted gem, after years of study and practice, to raise the wall of thorns encircling his abode, to reduce timber to twigs, and -- most surprising of all -- to find the hidden way posts and treasure houses of the Fair Folk. After looting one of their troves in search of a stone of immortality, the wizard was hunted unsuccessfully by several of their people, including the keeper of a way post in the Hill Cantrevs, whom Morda turned into a mole; and was eventually discovered by Doli, whom Morda turned into a frog. Doli survived long enough without water to be found by Fflewddur's giant cat, Llyan, who brought Doli in frog-form, barely able to croak out a few words, to Taran and his companions. 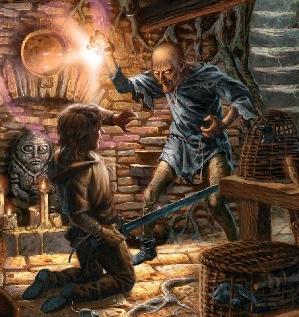 Taran attempted to complete Doli's mission of spying out Morda's powers but was caught in the nooses of the thorn wall. He was saved mainly by luck; a sliver of bone found by Taran's clever crow, Kaw, proved to be Morda's little finger, into which Morda had hidden his life force in order to protect himself from harm. Possessing the bone protected Taran from being transformed like his companions; breaking it -- as only the wizard's own prodigious strength would do, as he struggled to wrest it from Taran's grasp -- ended the wizard's life and broke his enchantments.

Along with Angharad's jewel, Morda also took a seemingly blank tome, the Book of Llyr, from her before she died. Believing the book to be empty he sold it to Glew, who was hoping to learn enchantments.

Retrieved from "https://prydain.fandom.com/wiki/Morda?oldid=8759"
Community content is available under CC-BY-SA unless otherwise noted.