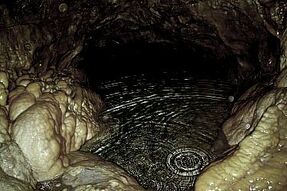 The Mirror of Llunet was the object of Taran's quest -- a symbol for the search for his own identity -- throughout the events of Taran Wanderer.
This page contains spoilers. If you do not wish to be spoiled, do not read further.

Taran sought the Mirror on the advice of Orddu. He believed it to be an enchanted looking glass, hidden somewhere in the Llawgadarn Mountains, that could show him his heritage. To his surprise, it turned out to be a small pool of water, in a cave at the foot of Mount Meledin, near to the Lake of Llunet. Its water derived from a slow trickle down the wall of the cave, yet even after aeons of collection it was scarcely a finger's width deep, and almost preternaturally still and reflective. The so-called Mirror was of no particular enchantment -- save that its exceptional clarity would show a man as he truly was.

The pool was destroyed by Dorath, a mercenary who pursued Taran.

Retrieved from "https://prydain.fandom.com/wiki/Mirror_of_Llunet?oldid=6186"
Community content is available under CC-BY-SA unless otherwise noted.