Medwyn's Valley was a hidden region in the north of Prydain. This "green, sunlit" valley was warded by Medwyn, a Noachian figure and protector of animals. The valley was located in the foothills of the Eagle Mountains, the peaks of which encompassed the lowland cleft on all sides. The way into the vale was secret, known only to animals and to Medwyn himself.
This page contains spoilers. If you do not wish to be spoiled, do not read further.

Taran deemed the valley "the most beautiful he had ever seen". Tall hemlocks and low white cottages dotted the "rich and tender" fields. A small, sparkling lake offered beauty and refreshment for the local fauna, which were plentiful: cattle grazed, bright-plumaged birds streaked the skies; fawns froliced among wolves; bears scavenged and eagles soared above gentle winds.

Only animals could find their way into Medwyn's Valley, through an apparent enchantment that awoke some atavistic instinct. Once, long ago, Medwyn allowed some humans into the valley whom he deemed worthy. Similarly, he once offered Taran of Caer Dallben a place there if the Assistant Pig-Keeper so chose. Sometimes, wounded or hounded animals would come to the fertile meadows, seeking succor or refuge; at other times, those who sensed their deaths would come on a final journey into its beatific embrace. 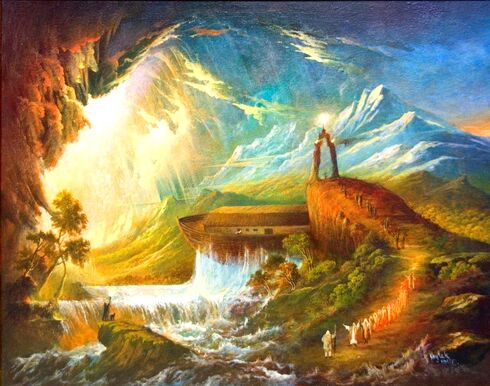 The remains of an enormous boat rested in the valley, its tall timber ribs overgrown with grasses and meadow-flowers, its shape blended into the slopes of the mountain. This stunning sight inspired Taran to wonder if perhaps Medwyn was truly Nevvid Nev Neivion, a legendary man who once rescued all Prydain's animals, two by two, from a catastrophic deluge.

Retrieved from "https://prydain.fandom.com/wiki/Medwyn%27s_Valley?oldid=8205"
Community content is available under CC-BY-SA unless otherwise noted.