Medwyn was the protector of Prydain's animals; he lived in a white cottage with many friendly creatures, including wolves, fawns, cattle and birds, in a hidden valley in the Eagle Mountains in the north of Prydain. He could communicate with these animals, for whom he provided a refuge from the painful world of men.

Medwyn was a broad, muscular man clad in a simple brown robe, with shoulder-length white hair, "shaggy brows", and a white beard that reached his waist. A gold circlet, set with a single blue gem, adorned his forehead. Medwyn had "the vigor of an ancient but sturdy tree". He spoke gently but could also be commanding.

Medwyn appears in the tale "The Rascal Crow", set during a time when Arawn Death-Lord intended to enslave the animals of Prydain. Medwyn warned the creatures of this plan, and received their declarations as to how they would defend themselves and their homes, but Kadwyr the crow mocked them all despite Medwyn's careful warnings. 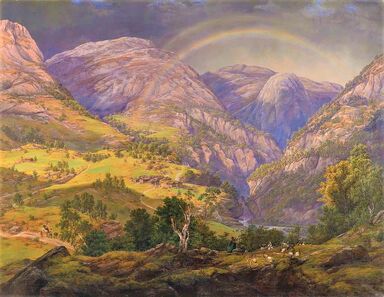 Medwyn provided assistance for the Companions, and a fast path through the hills after the white horse Melyngar led them, evidently by instinct, into the valley. During his visit, Taran observed the remains of a great ship, far from water. This led him to wonder if the ancient Medwyn was the Noah-like figure, called Nevvid Nav Neivion, about whom Dallben had once taught him, who had rescued the animals -- "two of every living creature" -- from a long-ago flood that had deluged Prydain. The memory of this event apparently remained with every animal still living, for they were able to find the valley purely by instinct. Medwyn said of the missing pig Hen Wen that "of all the places in Prydain, she would have come here first, especially if she sensed her life in danger." The chickens and bees from Caer Dallben had flown there after being frightened away by the Horned King.

Medwyn also taught Taran that the gwythaints had once been gentle, peaceful creatures, and that all animals and beings deserved kindness. He further told Taran a tale from Welsh mythology, "Kilhuch and Olwen", to instruct the Assistant Pig-Keeper in simple wisdom and morality.

Medwyn marshalled the forces of many of the animals of Prydain to aid in battles against Arawn's Huntsmen and gwythaints.

Retrieved from "https://prydain.fandom.com/wiki/Medwyn?oldid=8742"
Community content is available under CC-BY-SA unless otherwise noted.