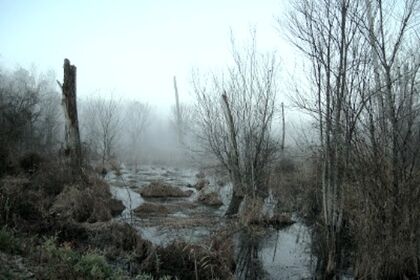 The Marshes were a series of treacherous bogs, stagnant pools, rotting turf, and quicksand mires which sucked at hooves and feet, and swallowed unwary travelers. On low hillocks and spongy ground, meager clumps of stunted trees and thorny furze grew amidst tall grasses, beds of reeds and scrub brush.

Reed-choked chains of half-submerged islands led to patches of firmer ground which rimmed the marshes, but which themselves contained gulleys and ditches. A narrow neck of solid turf lay at the upper reaches of the brackish wetlands; it was here at the end of a long gulley that the enchantresses' cottage sat.

Loons and other marsh birds -- likely ducks, geese and kingfishers -- plied the waters for minnows and other tasty fish, while toads could be heard croaking in faintly human voices from dark ponds. 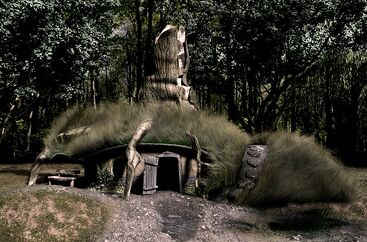 Cottage of the Three Enchantresses

The domicile of Orddu, Orwen and Orgoch was half-grown into the side of a low mound of earth; its thatched roof resembled a huge bird's nest. The door was crooked and its windows, when not covered by hanging thatch, were nearly opaque with dirt. Small out-buildings -- including stables, a shed and a chicken coop -- clustered around the mound. Inside the cottage was a confused clutter of weapons, pots and kettels, ceramic wear, books, and kitchen wares. A weaving area included a carding board, spinning wheel and loom, on which tangled tapestries with weird, shifting figures and animals could sometimes be seen. 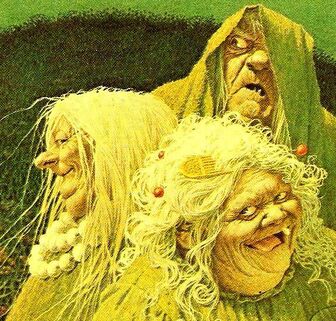 Gwystyl of the Fair Folk informed Taran and his Companions that the Cauldron had been taken to Morva. Taran helped his friends navigate the Marshes using the dreams and wisdom imbued in him by the Brooch of Adaon; the greedy, sucking ground of the Marshes swiftly gobbled up the Huntsmen of Annuvin which Arawn had sent to pursue them.

Taran later returned to the Marshes to see if the witches could tell him of his heritage. While given no more than a hint to seek the Mirror of Llunet, Taran was also told that he was the only person in Prydain to have dared the Marshes twice.

Among the few others who visited the Marshes and lived to tell the tale are Princess Eilonwy, Fflewddur Fflam, Gurgi, and much earlier, King Morgant of Madoc, who claimed to have gleaned the secret of the Crochan there, presumably from the three enchantresses.

In the film adaptation of the Black Cauldron, Morva is first mentioned by King Eiddileg as being the hiding place for the titular cauldron. Doli begrudgingly serves as the companions' guide to the Marshes of Morva, where they encounter the witches in their cottage, learning of their penchant for turning people into frogs and eating them.  After Taran trades his Magic Sword for the Black Cauldron, the witches spirit their cottage and everything in it away, leaving an empty knoll where the house once stood. The Cauldron bursts from beneath the ground, while the witches appear in the clouds to taunt the companions about the vessel's indestructibility. That night, the Horned King's guards and the gwythaints finally catch up with the companions and take them -- and the Cauldron -- to their master.

Retrieved from "https://prydain.fandom.com/wiki/Marshes_of_Morva?oldid=9213"
Community content is available under CC-BY-SA unless otherwise noted.