This article brings together on one page many maps of the land of Prydain, both official and fanmade, plus a number of historical maps of Wales, the real-world inspiration for the fictional land of Prydain. Please click on each map for a larger version.

The most recently published, official map of Prydain is included as a poster in the 2007 boxed set by Holt, Rinehart. The artist is David Wyatt, who also did the digitally painted covers for those editions. The map is a gorgeous amalgam of the original Ness maps (which see below), painted realistically as if on a spacially-distorted photograph of Wales. The administrator of this wiki has this map proudly pinned to his wall!

Illustrator Evaline Ness designed five maps of Prydain -- printed in The Book of Three, The Black Cauldron, Taran Wanderer, The High King and The Foundling and Other Tales of Prydain.
Ness's maps are stylized, similar to the collages she produced for the Prydain book covers (see Book Editions and Cover Illustrations Part One and Part Two). The maps are not to scale, employ non-traditional symbols, and are more whimsical than they are accurate to the source texts. With all that said, the maps are very much in keeping with the spirit of the books. 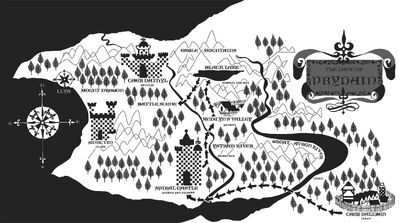 The Book of Three map by Evaline Ness 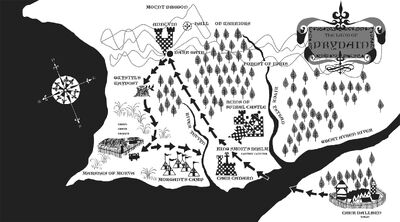 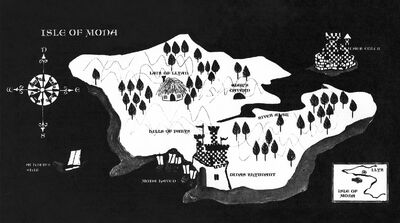 The Castle of Llyr map by Evaline Ness 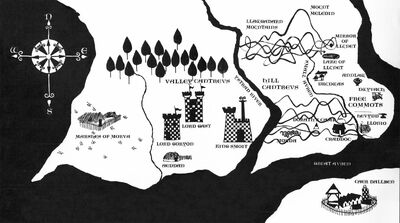 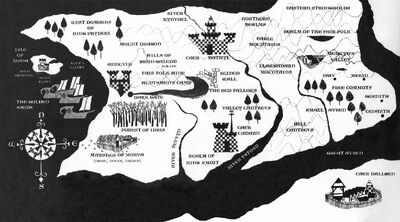 Prydain fans from the UK have been served a different map experience though Usborne books. Instead of re-printing the Ness maps, Usborne's editions of all five Prydain books include new maps by Alison Read, evidently based on Ness's originals. Read's maps are prints which appear to be composed as linocuts. 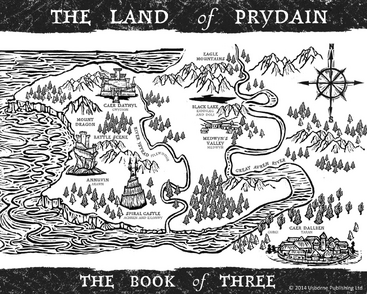 The Book of Three map by Alison Read 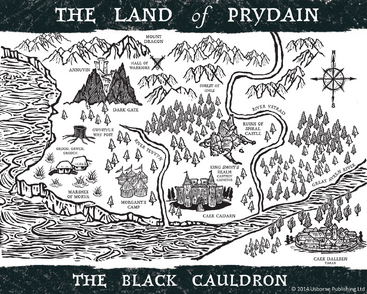 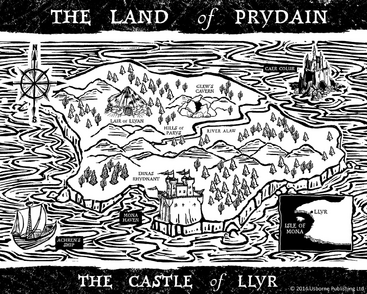 The Castle of Llyr map by Alison Read 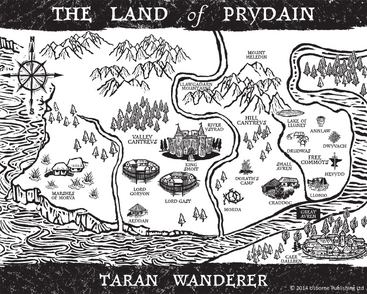 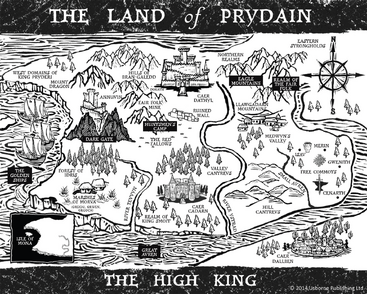 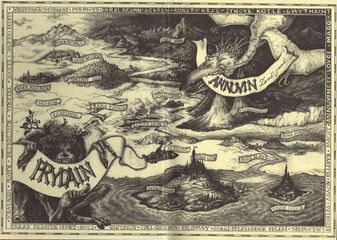 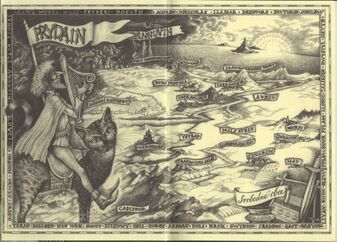 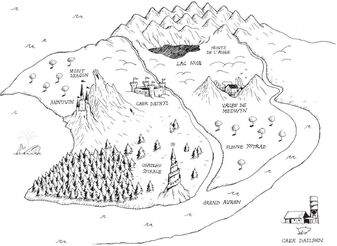 The Book of Three, French edition map by Daria Gatti 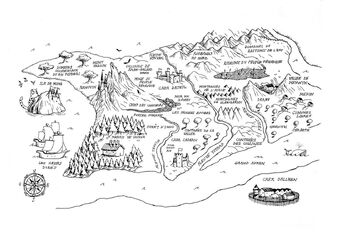 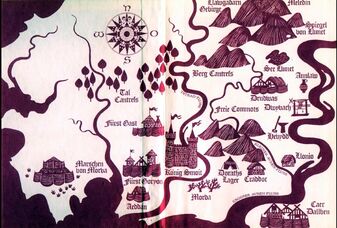 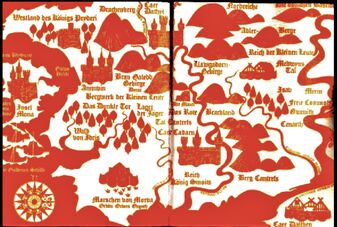 German edition map by Herbert Holzing for The High King.

These maps, drawn by the author of the Chronicles himself, Lloyd Alexander, evidently to use as a guide for his writing, are taken from his papers at the Free Library of Philadelphia. It is clear that not all details, locale specifics and place-names had been finalized yet.

Prydain artist Saeriellyn observes: "It doesn't look like any of these were his "definitive versions" though - looks to me like creative exercise as he tried to flesh out his vision." 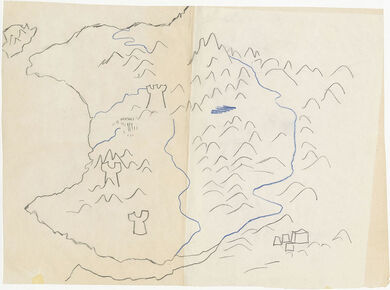 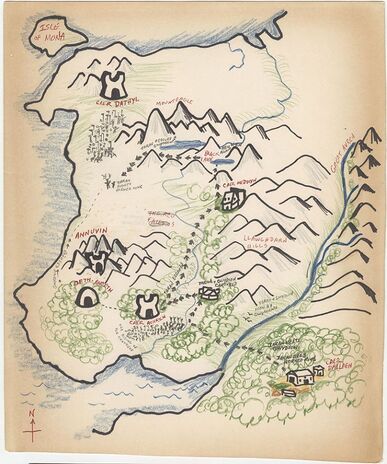 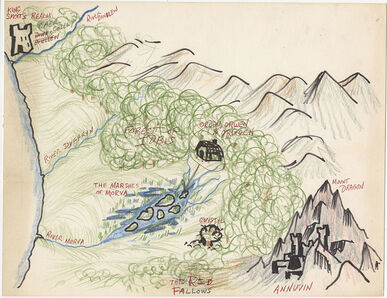 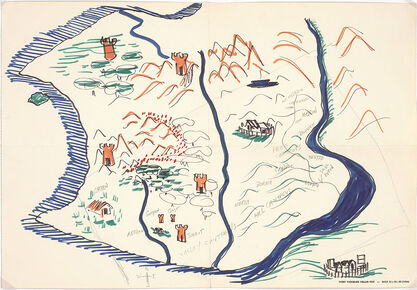 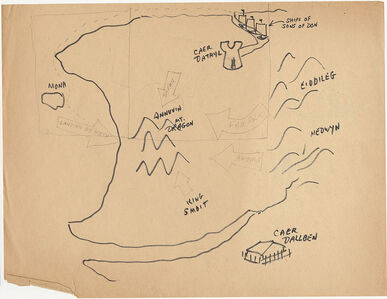 Prydain map-maker Brendan Wanderer (see below!) opines: "I love these maps because they are clearly part of LA’s emergent process. Some of the locations are totally contradictory to what is described or defined in the books. And yet other elements stand out. The larger one appears to be part of his plans leading up to publishing the first book. The one detailing Morva is clearly part of his design for Black Cauldron, although it appears to be flipped in orientation, but in the book, Morva seems to be further west, mot immediately south of Annuvin."

Further analysis forthcoming from the editors of this wiki. 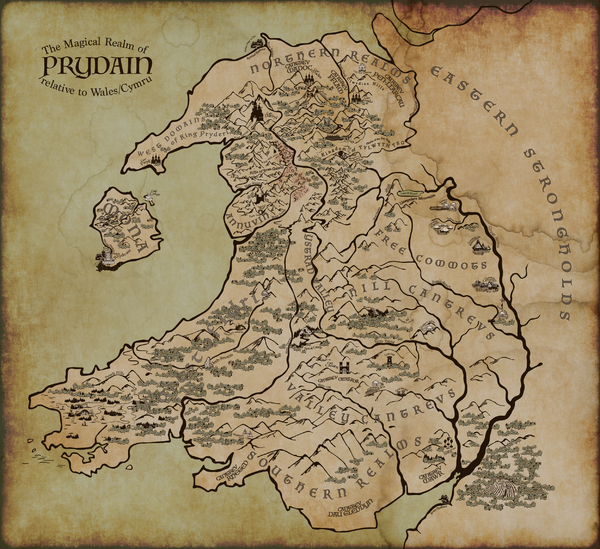 Artist and screenwriter Brendan Wanderer has produced an extraordinarily detailed map that merges Alexander's Prydain with the physical geography of Wales. Several key features distinguish Brendan's cartography from that of his predecessors. Most notably, the artist has shifted the locations of the Hill and Valley Cantrevs. Typically located east and west of the River Ystrad, respectively, here the Hill Cantrevs are sited north of the Valley Cantrevs, to better approximate the location of Wales' Black Mountains/Brecon Beacons (which lie north of the South Wales Valleys).

Other differences include the repositioning of the Small Avren and Ystrad rivers to reflect actual river routes. Both Annuvin and the Eagle Mountains are located in the area of Snowdonia National Park. The Forest of Idris covers a vast expanse as it extends from the southern edge of Annuvin all the way to the Marshes of Morva, here located in the area of Pembrokeshire. Mona has been formed by spinning the real Welsh island Anglesea 180 degrees, and moving it southward into the crescent bay.

These changes to the previous cartographic paradigm of Prydain's contours have resulted in the most geophysically convincing of all such illustrated maps. Improving on perfection, Brendan Wanderer has used his large map as a foundation for numerous smaller, more detailed route maps, which track our heroes' (and in some cases villains') paths across the terrain. These smaller maps can be found at the bottom of each chapter page for Books One - Three. The artist is currently working on similar maps for the final two books.

Blogger/artist Michal has produced two maps of Prydain. The first of these is more traditional in design and execution, and resembles more closely the nation of Prydain's inspiration: Wales. The second map by Michal is more colorful but less realistic; more simplistic symbols are used for terrain features, and the defining coastline of Wales has been smoothed and rounded until this version of Prydain has become an unreal fantasy land. 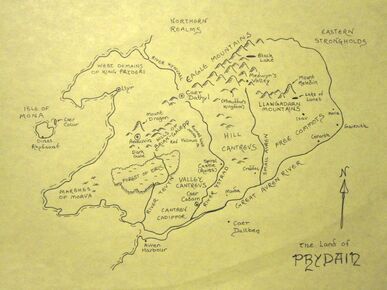 The first map by 'Michal' 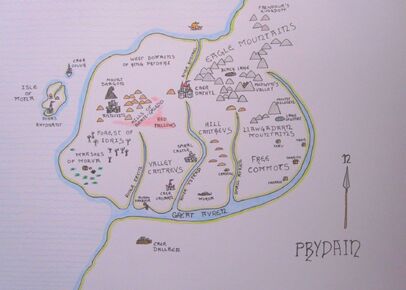 The second map by 'Michal'

In creating his maps Michal said: "Evaline Ness is a fine artist, but the Prydain maps were rough affairs that changed from book to book, reshuffling locations while erasing others." His critique is cogent.

Internet blogger Lotesse has created a composite of the various Ness maps with some additions of her own. She has noted that the originals "do not reproduce one another with any spatial accuracy."

Deviantart artist kingnumero has created a fine map of lower Prydain. On his deviantart page, the artist explains his reasons for creating this rendering, published in 2012:

"I tried my best to make sense of the maps given in each book and make a coherent amalgamation of their information. This is only the lower portion of Prydain, I plan to make another map, soon, that encompasses all of Prydain."

This map of the Isle of Mona was captured from deviantart in 2015. If anyone knows who the artist is, please assist in helping connect us so that we can provide a proper credit. 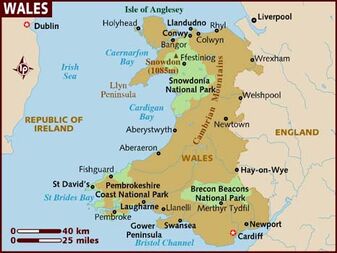 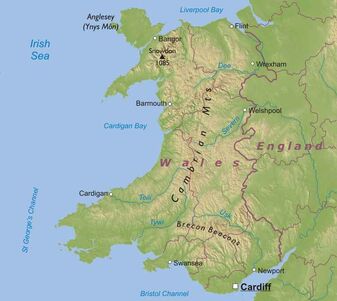 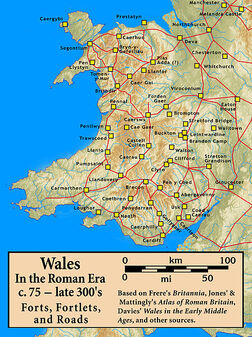 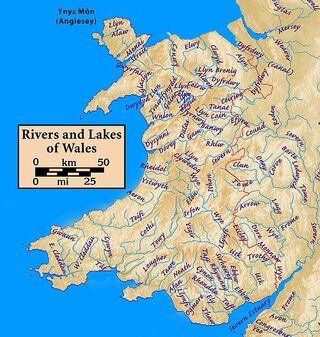 Rivers and lakes of Wales.

For the sake of comparison, here are several maps of Wales. Lloyd Alexander, author of the Chronicles of Prydain, wrote that "Prydain is not Wales -- not entirely, at least." It should not be assumed, then, that the two countries match each other's features and geography on a 1:1 basis; however, it's reasonable to use real maps of Wales as a general guide for the layout of Prydain.

Comparing real-world cartography to the illustrations, it becomes apparent that some parts of England -- namely Gloucestershire, Hereford, Warwickshire, Staffordshire and Cheshire -- must be included in Prydain as the Free Commots, with the Shropshire Hills and the Black Country in the place of the Llawgadarn Mountains. 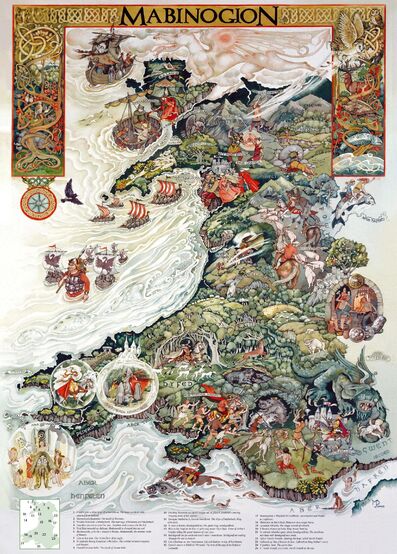 This map by artist Margaret Jones illustrates the events and characters of the Mabinogion, a medieval literary collection of Welsh legendary tales.

Margaret Jones was born in England. She married a Welsh Presbytarian minister, and spent the first part of her married life in India. After this period, her husband was appointed a lecturer in Religious Studies at the University College of Wales, Aberystwyth. Margaret Jones started painting professionally at 60 and became very well known and successful for her illustration of Welsh myths and stories. See more about the artist at: http://www.welshstories.com/mjones/index.html