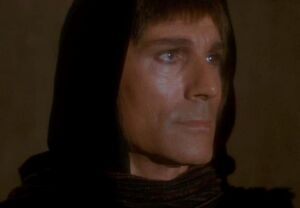 Magg was once Chief Steward of the royal House of Rhuddlum on the Isle of Mona. He was officious, seemed to dislike persons of low social status, and exuded a mildly unpleasant demeanor.
This page contains spoilers. If you do not wish to be spoiled, do not read further.
Unbeknownst to his betters, Magg dreamed of kingship and was willing to do anything to achieve it, including taking service under first Achren and then Arawn. Toward the end of his life, he became insane, even plotting to overthrow Arawn himself.

Magg was Chief Steward at Dinas Rhydnant. On learning that Fflewddur Fflam was not an official bard, Magg relegated Fflewddur to the stables. Not long after Eilonwy arrived, Magg kidnapped her and took her to Caer Colur, where she was bewitched by Achren. Eilonwy put up enough of a fight during her kidnapping that Magg had to gag her to keep her quiet, an unfortunate move since this meant that when she accidentally dropped her bauble -- an ancient item of enchantment much desired by Achren -- she was unable to tell him.

Magg believed Achren would give him a kingdom when she became ruler of Annuvin again, but when he asked, she said he would be lucky to keep his life. After the spell on Eilonwy had been broken, Magg opened the sea gates of Caer Colur, hoping to flood the ancient castle and kill everyone, as he fled by ship with his hired mercenaries.

Magg helped Arawn steal the sword Dyrnwyn, then briefly overthrew King Smoit and took control of Caer Cadarn; Eilonwy, Fflewddur Fflam and King Rhun helped retake the castle. Coming across Achren in his flight, he attacked her and left her for dead. Magg was killed when he tried to put on the iron crown of Annuvin, as he had attempted to become ruler of Annuvin without possessing the power.

Retrieved from "https://prydain.fandom.com/wiki/Magg?oldid=6422"
Community content is available under CC-BY-SA unless otherwise noted.