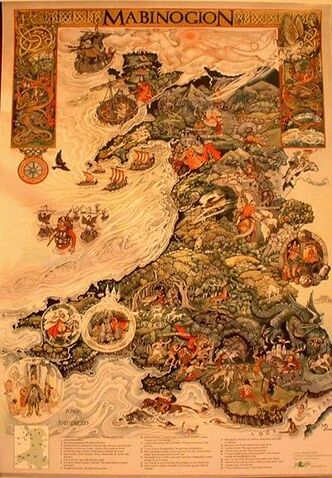 The Mabinogion is a collection of eleven prose stories collated from medieval Welsh manuscripts. The tales draw on pre-Christian Celtic mythology, international folktale motifs, and early medieval historical traditions. While some details may recall older Iron Age traditions and sub-Roman historical figures, each tale is the product of a later, highly developed medieval Welsh narrative tradition, both oral and written.

Lloyd Alexander, author of The Chronicles of Prydain, was inspired by the Mabinogion in his creation of Prydain and its many characters and events. While developing the series Alexander consulted a multi-volume set of books, translated from the Welsh into English by Lady Charlotte Guest in the mid-19th century. Guest's edition also included copious notes relating the tales to the Welsh Triads, another collection of Welsh legendary material.

Most versions of the Mabinogion consist of eleven tales: four connected narratives called The Four Branches of the Mabinogi, The Four Native Tales, and The Three Romances. Hanes Taliesin ("The Tale of Taliesin") is a later survival, not present in the Red or White Books, and is omitted from recent translations.

The Four Branches of the Mabinogi (Pedair Cainc y Mabinogi) 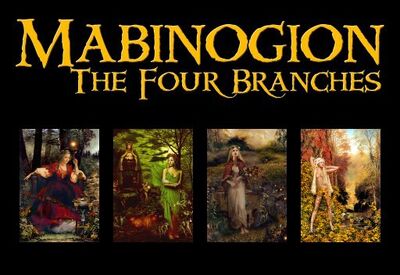 These are the most clearly mythological stories in the collection. The character of Pryderi appears in all four, though not always as the central character:

"Pwyll, Prince of Dyfed" tells of the friendship between Pwyll, prince of Dyfed, and Arawn, lord of the Otherworld, of the courting and marriage of Pwyll and Rhiannon and of the birth and disappearance of their son, Pryderi. This branch introduces a number of storylines that reappear in later tales, including the alliance between Dyfed and Annwn, and the enmity between Pwyll and Gwawl ap Clud.

"Branwen, Daughter of Llŷr" concerns the children of Llŷr; Bendigeidfran (literally "Brân the Blessed"), high king of Britain, and his siblings Manawydan and Branwen, and deals with the latter's marriage to Matholwch, king of Ireland. Matholwch's mistreatment of the British princess leads to a mutually destructive war between the two islands, the deaths of most of the principal characters, and the ascension of Caswallon fab Beli to the British throne. Pryderi appears but does not play a major part.

"Manawydan, Son of Llŷr" deals with the aftermath of Bran's invasion of Ireland and the horrific enchantment that transforms Dyfed into a wasteland. The chief characters of the tale are Manawydan, rightful king of Britain, his friend Pryderi, king of Dyfed, and their wives Rhiannon and Cigfa.

"Math, Son of Mathonwy" tells of a vicious war between the north and the south, of the birth of Lleu Llaw Gyffes and Dylan ail Don, of the tyngedau of Arianrhod, and of the creation of Blodeuwedd, a woman made of flowers. The chief characters of the tale are Math, king of Gwynedd, his nephew Gwydion, a magician, warrior and trickster, King Pryderi from whom Gwydion steals a herd of otherworldly swine, and Gwydion's nephew Lleu, cursed by his mother Arianrhod.

These are four stories from Welsh tradition and legend: 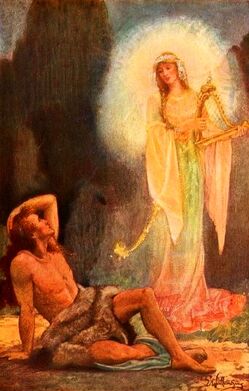 "The Dream of Macsen Wledig" is a romanticized story about the Roman Emperor Magnus Maximus. Born in Spain, he became a Legionary commander in Britain, assembled a Celtic army and assumed the title of Emperor of the Western Roman Empire in AD 383. He was defeated in Battle in 385 and beheaded at the direction of the Eastern Roman Emperor.

"Lludd and Llefelys" tells a tale of the Welsh hero Lludd, who inherits the kingship of Britain from his father, Beli, before long three plagues disrupt the peace. Both Red and White Book versions relied on the earlier Brut versions (IE, Brut y Brenhinedd, a series of Welsh adaptations of Geoffrey of Monmouth's Historia Regum Britanniae), but elements of the tale predate the Bruts as well as Geoffrey. Specifically, "Lludd" supplies an origin for the dragons prophesied by young Merlin Ambrosius in the Vortigern story. 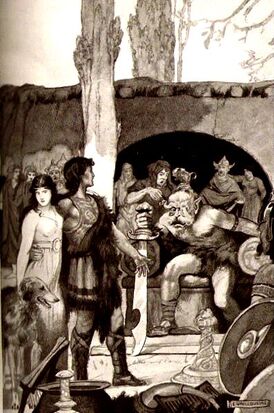 The tales "Culhwch and Olwen" and "The Dream of Rhonabwy" have interested scholars because they preserve older traditions of King Arthur. "Culhwch" is the longest of the surviving Welsh prose tales. Certain linguistic evidence indicates it took its present form by the 11th century, making it perhaps the earliest Arthurian tale and one of Wales' earliest extant prose texts. A fight against the terrible boar Twrch Trwyth has antecedents in Celtic tradition, and the list of King Arthur's retainers recited by the hero is a rhetorical flourish that preserves snippets of Welsh tradition that otherwise would be lost.

"The Dream of Rhonabwy" is the most literary of the medieval Welsh prose tales. It may have also been the last written. A colophon at the end declares that no one is able to recite the work in full without a book, the level of detail being too much for the memory to handle. The comment suggests it was not popular with storytellers, though this was more likely due to its position as a literary tale rather than a traditional one.

There is no consensus about the ultimate meaning of "Rhonabwy". On one hand it derides Madoc's time, which is critically compared to the illustrious Arthurian age. However, Arthur's time is portrayed as illogical and silly, leading to suggestions that this is a satire on both contemporary times and the myth of a heroic age.

These are Welsh versions of Arthurian tales that also appear in the work of Chrétien de Troyes:

Scholars have long debated whether the Three Romances are based on Chrétien's poems or if they derive from a shared original. Though it is arguable that the surviving Romances might derive, directly or indirectly, from Chrétien, it is probable he in turn based his tales on older, Celtic sources. The Welsh stories are not direct translations and include material not found in Chrétien's work. 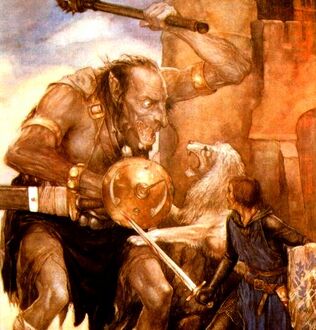 "Owain, or the Lady of the Fountain" is analogous to Chrétien de Troyes' Old French poem Yvain, le Chevalier du Lion, though "Owain" is based on the historical figure Owain mab Urien. It was once thought "Owain" and Yvain were derived from a common lost source, but it now seems more likely that "Owain" was directly or indirectly based on Chrétien's poem, with local literary touches added to appeal to a Welsh audience. 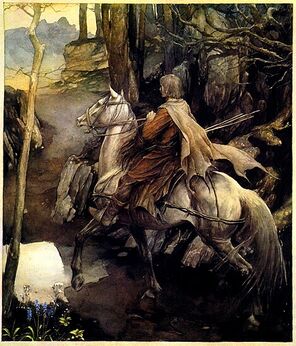 "Peredur, son of Efrawg" is associated with Chrétien de Troyes' unfinished romance Perceval, le Conte du Graal, but it contains many striking differences from that work, most notably the absence of the French poem's central object, the grail. Versions of the text survive in four manuscripts from the 14th century.

"Geraint and Enid" is analogous to Chrétien de Troyes' 12th-century poem Erec et Enide; some scholars think the two derive from a common lost source, while others believe "Geraint" is based directly or indirectly on Erec (though Chrétien may have had a Celtic source).

The Mabinogion and The Chronicles of Prydain

Lloyd Alexander estimated he had read Guest's edition of the Mabinogion "at least twelve times" while preparing the Prydain series1. He further explained that Guest's annotations had "proven perhaps most valuable"2. In her copious notes Guest had linked many of the Mabinogion's characters, stories and themes to the Welsh Triads, where additional details were often supplied. Though the Triads and the tales of the Mabinogion appear in two of the same source books (see Dates of Origin, below), the Triads are not considered part of the Mabinogion.

For example, Alexander drew the names Coll, Dallben and Hen Wen from Guest's notes concerning a Triad which recorded "The Three Powerful Swineherds of Britain". Alexander also adapted the plot of the first book in his Chronicles, The Book of Three, from a summary of a medieval Welsh poem translated as "The Battle of the Trees". Neither the "Swineherd" Triad, the battle poem nor its summary appears in any edition of the Mabinogion, except in Guest's extensive notes at the end of other stories. 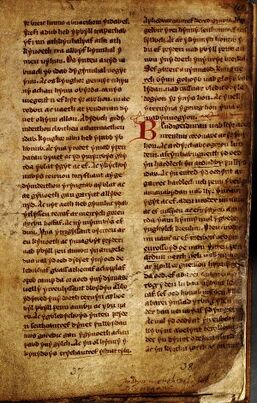 The stories of the Mabinogion appear in either or both of two medieval Welsh manuscripts, the White Book of Rhydderch or Llyfr Gwyn Rhydderch, written circa 1350, and the Red Book of Hergest or Llyfr Coch Hergest, written about 1382–1410, though texts or fragments of some of the tales have been preserved in earlier 13th century and later manuscripts. Scholars agree that the tales are older than the existing manuscripts, but disagree over just how much older.

It is clear that the different texts included in the Mabinogion originated at different times. Debate has focused on the dating of the Four Branches of the Mabinogi. Sir Ifor Williams offered a date prior to 1100, based on linguistic and historical arguments, while later Saunders Lewis set forth a number of arguments for a date between 1170 and 1190; Thomas Charles-Edwards, in a paper published in 1970, discussed the strengths and weaknesses of both viewpoints, and while critical of the arguments of both scholars, noted that the language of the stories best fits the 11th century, although much more work is needed. More recently, Patrick Sims-Williams argued for a plausible range of about 1060 to 1200, which seems to be the current scholarly consensus.

The question of the dates of the tales in the Mabinogion is important, because if they can be shown to have been written before the 12th century -- the period of Geoffrey of Monmouth's influential Historia Regum Britanniae and the romances of Chrétien de Troyes -- then some of the tales, especially those dealing with Arthur, would provide important evidence for a Welsh development of Arthurian legend. Regardless, their importance as records of early myth, legend, folklore, culture, and language of Wales is immense. 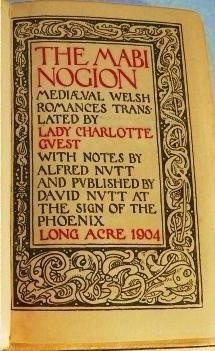 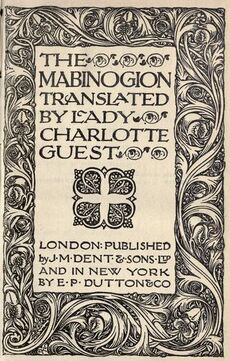 The name "Mabinogion" first appeared in William Owen Pughe's 1795 Cambrian Register: "The Mabinogion, or Juvenile Amusements, being Ancient Welsh Romances." It was then adopted as the title by the first English translator of the complete tales, Lady Charlotte Guest, in the mid-19th century. The form mabynnogyon does indeed occur at the end of the first of the Four Branches of the Mabinogi, but it is now generally agreed that this is a scribal error that was assumed to be the plural of the Welsh word mabinogi, which occurs correctly at the end of the remaining three branches. The word mabinogi itself is something of a puzzle, although it is ultimately related to the Welsh mab, which means "son, boy". Some scholars suggest that mabinogi derives from the name of the Celtic deity Maponos ("the Divine Son"), and originally referred to materials pertaining to that god.

Strictly speaking, "Mabinogi" applies only to the Four Branches, which are speculated to have derived from older tradition. Each of these four tales ends with a colophon meaning "thus ends this branch of the Mabinogi" (in various spellings), hence the name.

Lady Charlotte Guest's translations of the tales of the Mabinogion can be read in full at this site.

Retrieved from "https://prydain.fandom.com/wiki/Mabinogion?oldid=8154"
Community content is available under CC-BY-SA unless otherwise noted.