Little Dallben is the twelfth chapter of The Black Cauldron. Here a connection is established with mysterious, supernatural beings who, because of that connection, reveal some of what has been hidden concerning the object of the plot. Intrigue deepens and danger is palpable. 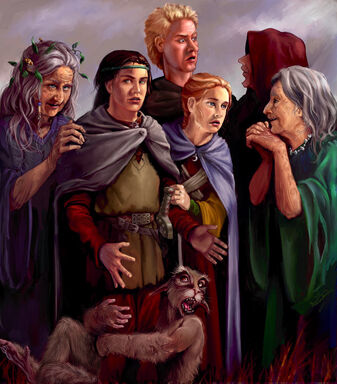 The three enchantresses became more welcoming to the Companions when they learned that they knew Dallben, whom the witches claimed 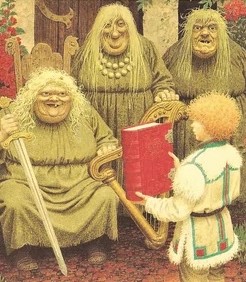 to have found as an infant and raised to boyhood, before they ejected him from the cottage for knowing too much. It was they, too, who gave the boy Dallben The Book of Three, the prophetic and historical tome from which the enchanter had gleaned so much wisdom. The enchantresses went on to declare that the Black Crochan -- as they called the Cauldron -- was theirs, and that they had let Arawn have it long enough, so they had stolen it back. The witches refused even to consider letting the companions have the Crochan, but allowed them to stay the night in a shed, and suggested the four should think about what form they might like to take before leaving.
Retrieved from "https://prydain.fandom.com/wiki/Little_Dallben?oldid=9247"
Community content is available under CC-BY-SA unless otherwise noted.