King Smoit was the ruler of Cantrev Cadiffor and master of Caer Cadarn. He was a mighty warrior, a boisterous and courageous hero who served the Sons of Don and befriended Taran of Caer Dallben. His banner was crimson with the emblem of a black bear.

Smoit was a huge, red-bearded man who loved to eat (his breakfasts lasted till midday and only served to whet his appetite for dinner), with a battle-scarred face and a wide girth. Of him, Fflewddur Fflam said that "you can always hear him before you see him" because of his near-constant, uproarious laughter. Smoit enjoyed lightly mocking his comrades in a spirit of friendly rivalry, and once described Taran as a "skinned rabbit".

Despite his boisterousness, Smoit had a certain nobility of heart. He recognized that he was a fighting man and that he lacked wisdom, but his conscience troubled him when he did not do the right thing, and he consistently chose to serve good and righteous lords such as the Sons of Don. 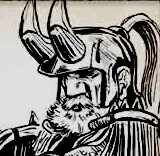 Smoit was not mentioned in the book, but in retrospect it was revealed that he had been one of the few southern kings who had stayed loyal to the House of Don, declining to rise in rebellion under the Horned King along with the other southern Cantrevs such as Mawr, Rheged and Dau Gleddyn. 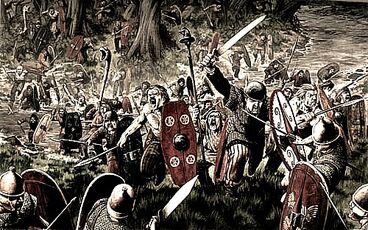 Smoit attended Prince Gwydion's council in Caer Dallben, and was displeased with his role in the plan. He and his warriors were ordered to wait at Caer Cadarn for the others, should there be a need to retreat. After they branched off from the rest of the group, Smoit was not seen until the climactic battle against King Morgant and his men, in which the King of Cadiffor wielded "a naked sword in his fist" with "a shout of battle on his lips", and slew Morgant in hand-to-hand combat. 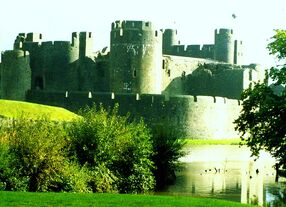 Taran journeyed from the Marshes of Morva to Caer Cadarn, in hopes Smoit would restock him. However, Taran first had to reckon with Lord Goryon and Lord Gast, who were fighting over Cornillo the prize cow and her herds. On the way, in trying to ford a river, Smoit was thrown off his horse and tumbled down a waterfall; luckily he survived and was healed by Taran and the Companions. On reviving Smoit threatened to toss Goryon and Gast in his dungeons, but Taran suggested they help repair the farm of Aeddan, whose fields the lords' conflict had destroyed. Cornillo herself was also given to the farmer in recompense for his lost crops.

After the confrontation, Smoit restocked Taran and Gurgi, though not before offering Taran to become his son, to inherit Caer Cadarn when the time should come and to become its king. As attractive as this prospect seemed to Taran, he politely (and wistfully) declined.

Smoit was imprisoned in his empty larder when his fortress was overtaken by Magg. Once freed, Smoit gathered his armies, including those of Lords Goryon and Gast, and marched them toward Caer Dathyl only to be assailed on the way by forces loyal to Arawn. According to Doli, the Fair Folk joined Smoit in these battles against the traitor-lords of the Valley Cantrevs. Later, Smoit joined the Sons of Don in the last assault on Annuvin, and he was among those who cheered the proclomation that Taran and Eilonwy would be the new High King and Queen of Prydain.

Retrieved from "https://prydain.fandom.com/wiki/King_Smoit?oldid=7103"
Community content is available under CC-BY-SA unless otherwise noted.