King Eiddileg was the dwarfish ruler of The Kingdom of Tylwyth Teg. Called "the Dwarf King", Eiddileg was a stout, round, stubby-legged regent with a bristling yellow beard. He wore a robe of "garish green and red" and sparkling rings on plump fingers.

Like many of the Fair Folk over whom he reigned, King Eiddileg was grumpy and short-tempered, but was essentially honorable insofar as he opposed Arawn Death-Lord and always held true to his word. The Dwarf King was critical of humans, lamenting that men often captured Fair Folk in order to force some measure of payment, usually magical. He mocked and insulted humans with names such as "thick-skulled oafs". Eiddileg further complained that humans never acknowledged his people's labors at improving the land of Prydain, and ridiculed the "insipid names" men came up with to describe the Fair Folk. 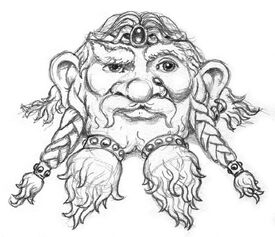 Eiddileg took Taran, Eilonwy, Fflewddur Fflam, Gurgi, and Melyngar prisoners for a short time before he released them at their urgent insistence, along with food and a dwarf guide named Doli. Before the travelers left his throne room, Eilonwy gave him a kiss on the head. When she left, he could be seen smiling happily, therefore providing a hint that like all Fair Folk his gruff or defensive exterior masked a good and kindly heart.

Eiddileg was often referenced as giving orders to his people, or as being informed of news of the struggle against Arawn, but the Companions never saw him again. During the events of The High King, the Dwarf King -- on hearing of the Death-Lord's impending attack on the Sons of Don -- ordered Doli to lead a troop of some hundred dwarf warriors to aid Taran in the Hills of Bran-Galedd.

At the end of the series, as enchantments vanished from Prydain, Eiddileg commanded the Fair Folk way posts closed, the entrances to his kingdom sealed shut from the world of men. And so magic passed from the land.

Retrieved from "https://prydain.fandom.com/wiki/King_Eiddileg?oldid=9322"
Community content is available under CC-BY-SA unless otherwise noted.