This article is about the book chapter. For the crow, see Kaw.

Kaw is the seventh chapter in The Black Cauldron. Here supernatural forces who are not what they seem provide sanctuary for the protagonists, and the plot turns towards a new goal, or the first goal in a new locale. The theme of vying for honor drives the hero and his rival. 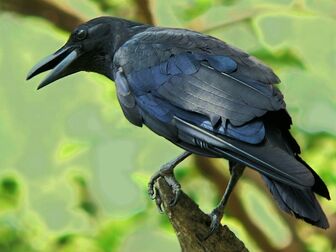 The reluctant Gwystyl admitted he had heard a rumor the Black Cauldron had been stolen, but given that Arawn would never rest until he found the pot, the best course of action was to drop the search and go quietly. When Eilonwy suggested returning to Caer Cadarn, Gwystyl showed the first sense of enthusiasm the Companions had seen.

After much cajoling, Gwystyl gave the Companions a black powder to put on their shoes (or hooves) and so cover their tracks for a while. Doli was certain that the way post keeper was holding something back, when abruptly Kaw croaked, "Orddu! Orwen! Orgoch!" Doli's threats of squeezing compelled Gwystyl to mention vaguely the three enchantresses, and Kaw further disclosed that the trio of witches resided in the Marshes of Morva.

Taran and Ellidyr argued about whether to go to Caer Cadarn, as ordered by Prince Gwydion, or to search for the Cauldron in the Marshes. Ellidyr expressed his intent to go himself, rousing Taran's sense of competition. Eilonwy pointed out that Adaon commanded them both, but the Son of Taliesin mysteriously deferred to Taran. Taran chose to go to the Marshes. Gwystyl glumly bade them goodbye.

Retrieved from "https://prydain.fandom.com/wiki/Kaw_(chapter)?oldid=7963"
Community content is available under CC-BY-SA unless otherwise noted.