This article is about the group of warriors. For the chapter, see The Huntsmen of Annuvin. 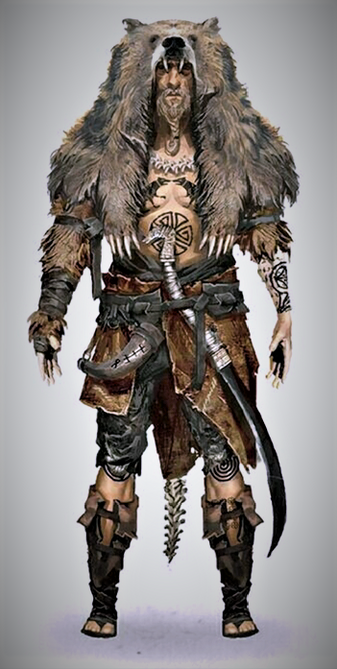 The Huntsmen of Annuvin were a brotherhood of ruthless warriors. They were criminals, cruel murderers who had betrayed their own comrades, and sworn allegiance to Arawn Death-Lord in an unbreakable blood oath. Arawn in turn gave the Huntsmen supernatural strength and senses. 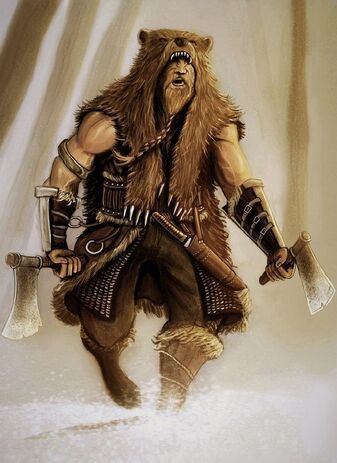 The Huntsmen wore jackets and leggings of animal skins, to disguise themselves as woodland beasts such as bears and wolves. They carried long knives, and their leader employed a hunting horn. Each Huntsman wore a crimson brand on his forehead, the mark of Arawn's power and of their blood-oath to the Death-Lord.
This page contains spoilers. If you do not wish to be spoiled, do not read further. 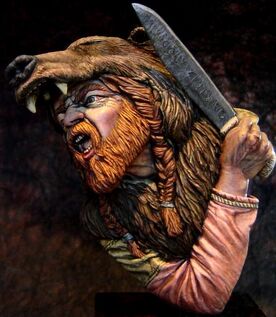 The Huntsmen traveled in small bands, using woodcraft to conceal themselves and communicated using bird and animal calls. If one of their number were slain, the remaining Huntsmen grew stronger. They traveled afoot, swiftly and with great endurance; fatigue, hunger, and thirst meant little to them. "Even as their number dwindles," warned Prince Gwydion, "their power grows." This unique ability made them among Arawn's most dangerous servants. 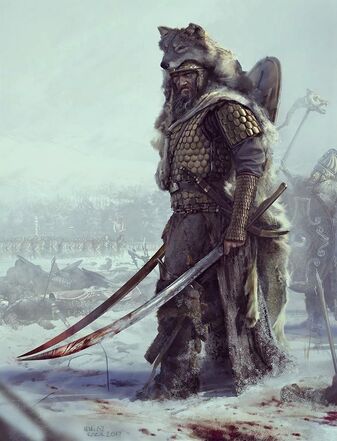 A band of about a dozen Huntsmen ambushed Adaon's party in the Forest of Idris near Dark Gate, pursued them through the woods, and eventually slew Adaon. Taran defeated a pair of them by leading them into quicksand in the Marshes of Morva. The Huntsmen also harried Ellidyr, who was traveling alone and kept him from entering the Marshes. At Dark Gate, the forces of King Morgant were turned away by the fierce onslaught of the Huntsmen.

While Taran was leading a force of Commot men to harry the army of Cauldron-Born on a return march to Annuvin, a long column of Huntsmen trapped the men against a mountainside. Under the distant but brilliant light of Princess Eilonwy's bauble, Taran saw the approaching force of Huntsmen and barely escaped being slaughtered. That night, Doli of the Fair Folk spied on the Huntsmen's camp inside a gorge, around the rim of which bears and wolves -- sent by Medwyn to help in the resistance to Arawn -- patrolled, trapping the Huntsmen.

Doli directed the Companions and Fair Folk warriors to gather branches and shrubs, pile these high on a nearby frozen lake, and set the kindling aflame. Unlocked by the heat, a river of fiery ice gushed into the ravine and drowned or dashed the Huntsmen to death. Those who tried to escape were devoured by the roving woodland predators.

Retrieved from "https://prydain.fandom.com/wiki/Huntsmen_of_Annuvin?oldid=9355"
Community content is available under CC-BY-SA unless otherwise noted.