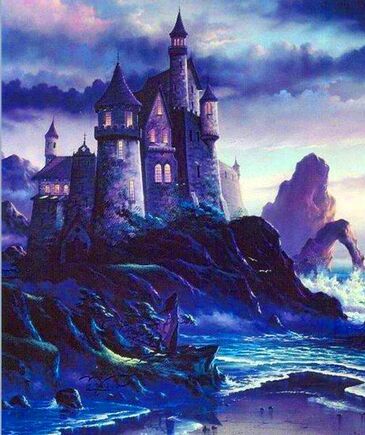 The House of Llyr was a royal family who ruled over, and were part of, a folk called the Sea People. Their seat was at Caer Colur on the Isle of Mona. The ruling family possessed powers of enchantment.
This page contains spoilers. If you do not wish to be spoiled, do not read further.

According to Princess Eilonwy, who was the last heir of that lineage, their patriarch was called Llyr Half-Speech (see Legendary Sources, below).

Eilonwy further explained that the lords of the House of Llyr were war leaders and their ladies were enchantresses. However, also according to Eilonwy, there had been a time in 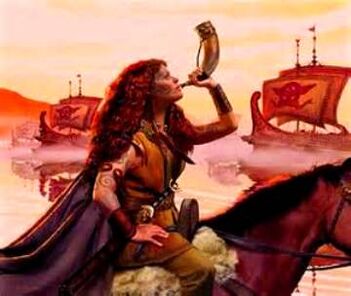 ancient days when the Sword Maidens joined battle alongside the men. Further, since marital practice was to wed daughters of the House of Llyr to proven enchanters of great renown (as described in the story "The True Enchanter" in The Foundling and Other Tales of Prydain), then at least some of the men of that House must have been enchanters rather than strictly warlords.

Eilonwy was the daughter of Angharad daughter of Regat; beyond those three names no other personage of the House of Llyr is known. Since Angharad perished without further known offspring, and Caer Colur itself lay in ruins after her elopement, the line ended with Eilonwy, who renounced her powers and therefore her heritage upon becoming Queen of Prydain. 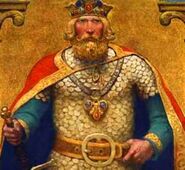 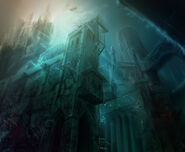 Llŷr Llediaith (also known as Llyr Lleddiarth, perhaps comparable to Shakespeare's King Lear and Geoffrey of Monmouth's Leir of Britain) was a mythical British King of Siluria. According to the medieval Welsh Triads, Llyr married Penarddun ferch Beli in about 20 BC. Llediaith, which means literally "half-speech", is said to refer to "the act of speaking Welsh with a foreign accent". He was reportedly educated in Rome by Augustus Caesar. His home was at Dunraven Castle, which was situated on a hill called Twyn Rhyvan (the Hill of Rome) in Glamorgan.

Among his "Wise Sayings" recorded by the Welsh Bards, we find attributed to Llyr: "No folly but ends in misery." Legend says he is a direct descendant of Aedd Mawr "Edward the Great", a king born about 1300 BC. Siluria encompasses the present day shires of Monmouth, Brecon and Glamorgan, in southeastern Wales.

In medieval Royal pedigrees he appeared as Llyr Marini ("of the Sea"). In these sources he was married to Lweriadd, daughter of Belenos the Sun-God; his children included Manawydan, Bran the Blessed and Branwen.

According to Welsh legends recorded elsewhere, Llyr was chief of the gods.

Geoffrey's King Leir was said to have been educated in Rome by Augustus Caesar. He reigned 60 years, and supposedly founded the city of Leicestershire in central England, though this seems like a specious interpolation. Leir lost his kingdom when he attempted to divide it amongst his three daughters, a story re-told in Shakespeare's magnificent play, King Lear.

In ancient Ireland Lir was God of the Sea, like his son, Manannan (called Manawydan in Wales). When the Tuatha De Danann were driven underground by the sons of Mil, Lir was rejected as chief in favor of Bof. As a measure of reconciliation, the latter offered him the choice of his daughters in marriage. Lir chose Eve, by whom he had three children; and, when she died, he married her sister, Eva. Unfortunately, Eva became jealous of Lir’s offspring and she lured them to a lake where they were turned into swans! The children were thus forced to spend three hundred years each at three different locations until Christianity overran the land. When finally freed, they were so old that they died soon afterward.

Lloyd Alexander, author of The Chronicles of Prydain, provides so little information on his Llyr Half-Speech that we may imagine for ourselves whichever version of this enigmatic figure we prefer.

Retrieved from "https://prydain.fandom.com/wiki/House_of_Llyr?oldid=9331"
Community content is available under CC-BY-SA unless otherwise noted.