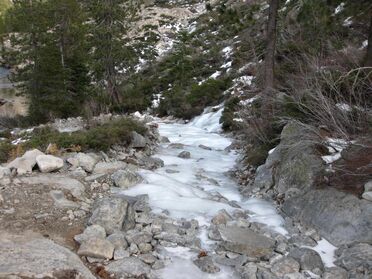 The Hills of Bran-Galedd were a region of treacherous upland slopes in the northwest of the land of Prydain. Located south of Caer Dathyl and east of Annuvin, the hills provided a path into the Land of Death, shorter than the one given by the Red Fallows, yet a harsh and dangerous way. The hills rose sharper as they went westward, turning into "steep crags" where Mount Dragon rose highest among them, guarding the Iron Portals into Annuvin.

The Hills of Bran-Galedd were filled with "rocky troughs and narrow defiles", winding trails slippery with ice, sudden drops where the ground fell away sharply into frozen gorges. Icy winds blew down from the high western peaks like a frozen hammer; hidden crevices and ravines held deep pits of snow "where horse and rider might founder beyond rescue".

In these hills lay an abandoned Fair Folk mine long plundered of its crystals and gems. Within the hills, too, was the camp of Dorath during the war of the Sons of Don against the forces of Arawn Death-Lord.

Retrieved from "https://prydain.fandom.com/wiki/Hills_of_Bran-Galedd?oldid=7051"
Community content is available under CC-BY-SA unless otherwise noted.