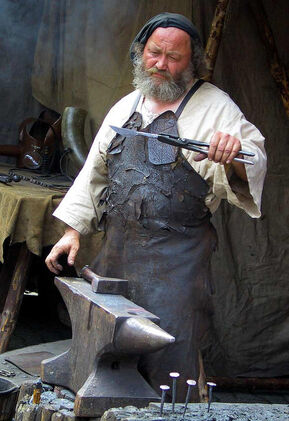 Hevydd Son of Hirwas was a master smith of the Free Commots, residing in Commot Cenarth.
This page contains spoilers. If you do not wish to be spoiled, do not read further.

Taran studied under Hevydd briefly during his wanderings in the novel Taran Wanderer, learning the basics of how to make a sword. Though Taran eventually decided a smith's life was not for him, he was not without skill; the sword he made would eventually ring true during combat, and save his life against the bandit Dorath. Hevydd originally tried to get Taran to leave, but was enraged when he thought Taran doubted his skill.

When war with Annuvin came during the events of The High King, Hevydd was the first in the Free Commots to pledge himself to Taran's banner; his neighbors quickly followed. Noting that the Commots' hearts were brave, but their weapons few, Hevydd promised Taran that he would rally all the smiths of the region to produce the arms needed. Hevydd fought bravely in the ensuing battles, and lived to return to Commot Cenarth.

Retrieved from "https://prydain.fandom.com/wiki/Hevydd?oldid=8210"
Community content is available under CC-BY-SA unless otherwise noted.