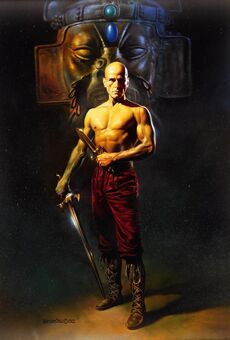 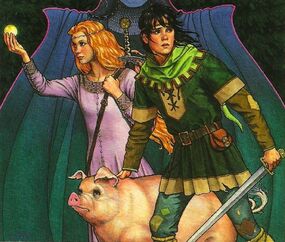 Taran took over the primary responsibility for Hen Wen's care, which led to Coll dubbing him "Assistant Pig-Keeper." Hen fled Caer Dallben when the Horned King drew near the farm; Gwydion, too, had journeyed there to glean answers from Hen; north of the farm he met Taran, who helped him search for the missing pig. Despite Gurgi's spotting her on the banks of the Great Avren river, Hen vanished without a trace. As it happened, the Fair Folk had nabbed her almost under Gwydion and Taran's noses, and taken her to their hidden kingdom for safe keeping. When Taran and the Companions visited the Fair Folk under The Black Lake, Gurgi found her in good condition, and she was reunited with Taran. She slipped away from him once more, however, running to tell Gwydion the Horned King's secret name, which allowed the Prince of Don to defeat the evil warlord. 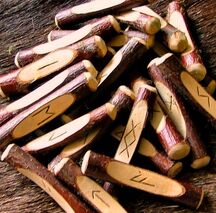 Hen's prophesies using the Letter Sticks imparted some clues as to the events to come, particularly with regard to the fate of Dyrnwyn. Hen Wen herself was terrified by what the visions showed her, and the Letter Sticks were destroyed in the effort of her final prognostication. 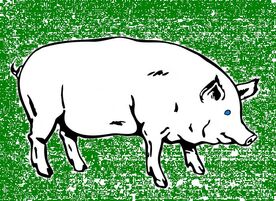 Retrieved from "https://prydain.fandom.com/wiki/Hen_Wen?oldid=8266"
Community content is available under CC-BY-SA unless otherwise noted.