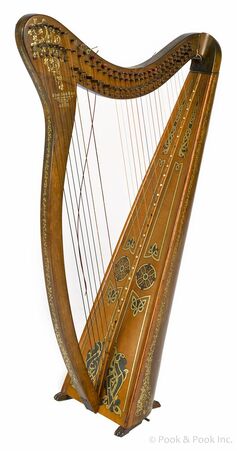 The Harp of Fflewddur Fflam was an enchanted harp given to Fflewddur Fflam after his failed trial to become a bard. The harp's strings would break whenever Fflewddur told a lie or "colored the facts", as Flewddur sometimes called his untruths in the Chronicles. The instrument also possessed a beautiful tone and often seemed to play of its own will when a tune was begun. 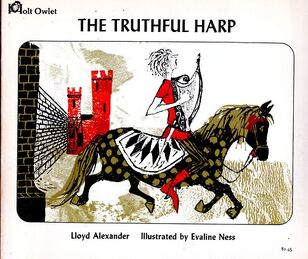 The story of how Fflewddur came to acquire the harp is told in the short story "The Truthful Harp". (This seventh story was first published in 1967 as a 32-page picture-book, illustrated by Evaline Ness.) Fflewddur ruled a tiny kingdom, where he was more friend than ruler. He studied to be a bard and boasted his knowledge and prowess, but despite his best intentions before the Council of Bards, he failed the oral exam and fumbled his harp, which shattered. He departed with an enchanted harp and "much to learn". As he wandered, he gave his cloak to a poor man despite the cold, saved a child from a river in flood at risk of his own life, and rescued from ambush a lord who had previously beaten him. On his return to the Council, he belittled his own good deeds, thereby discovering that a harp-string snapped whenever he stretched the truth. Chief Bard Taliesin counseled that his true deeds were better than his "gallant fancies". Fflewddur declared he would never lie again; all the strings tensed at once before he modified his pronouncement to a more modest confession that he had learned his lesson... though not forever. 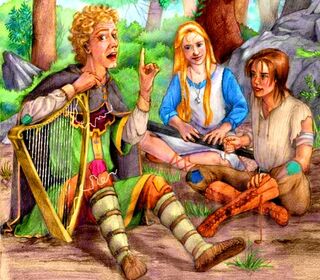 Shortly after the Companions' sojourn in Medwyn's Valley, Fflewddur played a tune on the harp which evoked in each listener a longing for home. Princess Eilonwy recalled the sea; Taran thought of Caer Dallben, and Fflewddur himself remembered his own drafty castle in the north.

After Fflewddur's heroism against the armies of the Horned King, Prince Gwydion gifted him with a single harp string that would never break, no matter how many extravagances of fact he laid upon it.

In exchange for the Black Crochan, Fflewddur offered the harp to the three enchantresses of Morva, in part to keep Taran from bargaining away the precious Brooch of Adaon. While Orwen expressed an interest in hearing its music, Orddu countered that if they wished for music they could but summon the birds to sing for them, and declined Fflewddur's offer. 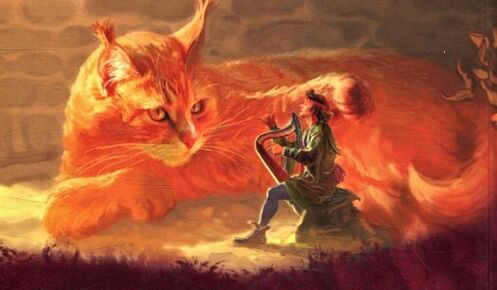 When the companions were trapped in Glew's Hut by the giant cat Llyan, Fflewddur discovered while absent-mindedly stroking the harp that the music appeased the great feline. He played the harp till his fingers were raw in order to let his friends escape, then managed to slip out while the cat slept contentedly. She pursued him and later, owing to the great affection she had developed for the bard, rescued him and all the companions from the tide after the flooding of Caer Colur. 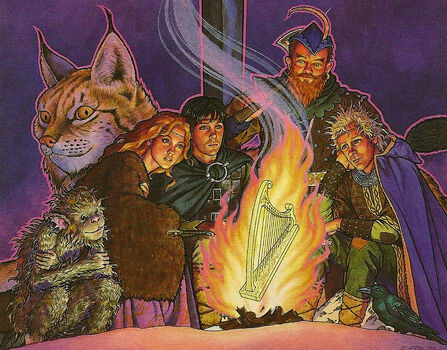 During a brutal snowstorm, Fflewddur unexpectedly smashed the harp and offered it as firewood to save his friends' lives. The only piece to survive was the string given by Gwydion; Fflewddur later gave the string to Taran as a farewell gift. 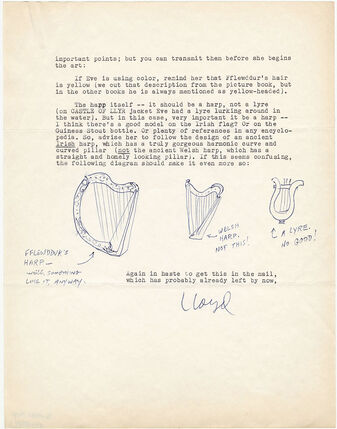 Author Lloyd Alexander provided a description of Fflewddur's harp to his editor, Ann Durell, in a letter dated 11/24/1966. In his instructions to Durell -- to be given to illustrator Evaline Ness -- Alexander writes:

This letter can be viewed at picture left, or at the Free Library of Philadelphia: https://libwww.freelibrary.org/digital/item/28904?fbclid=IwAR3dvwXnHLWBImzOu463GpDJtV9NusayXTw2tvlOEfKPd2YNEmpZVSJc6C0
Retrieved from "https://prydain.fandom.com/wiki/Harp_of_Fflewddur_Fflam?oldid=9769"
Community content is available under CC-BY-SA unless otherwise noted.