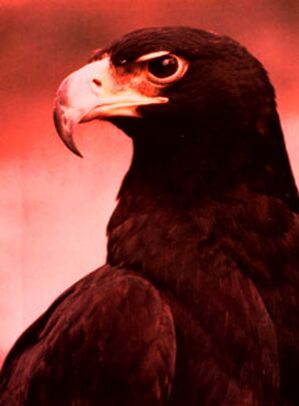 Gwythaints were huge birds of prey, terrifying winged predators. Arawn Death-Lord kept them in iron cages in the Land of Death, from which he released them to serve as his spies and messengers, the "Eyes Of Annuvin." The gwythaints were once gentle creatures, until Arawn forced them under his command, torturing them until they came to serve hum out of terror. 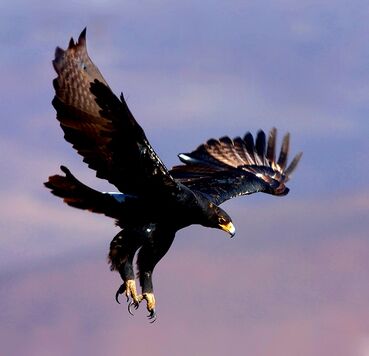 Gwythaints had black feathers, talons as sharp as daggers, and beaks like axe-blades. Their attack method was to swoop down on enemies, as true raptors do. From such details it's clear that the birds were akin to black eagles, which in our world dwell in the tropical and subtropical forests of southern Asia, and to Verreaux's eagles, which dwell mainly in Africa. 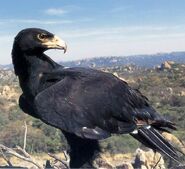 While searching for Hen Wen on the northern side of the Great Avren, Taran and Prince Gwydion were attacked by gwythaints. Gwydion rode Melyngar into the woods with Taran behind him in the saddle. The prince lamented the encounter, explaining that gwythaints were messengers of Arawn.

Later, while traveling in the Eagle Mountains, Taran found a Gwythaint Fledgling in a bush and nursed it back to health. Doli of the Fair Folk begrudgingly made a cage for it. The fledgling soon escaped its cage and vanished. Yet despite the dwarf's warnings of treachery, the gwythaint soon led Gwydion to Taran and enabled the defeat of the Horned King.

Kaw the crow flew from Caer Dallben to Annuvin at Taran's request, and in the Forest of Idris overheard Huntsmen of Annuvin discussing Arawn's intent to march on Caer Dathyl. Three gwythaints descended on Kaw from the sky. The crow outsmarted the messenger birds by feigning confusion before streaking away in a burst of speed, but one of the Eyes of Annuvin managed to injure the crow under his wing. Kaw escaped the predators by flying into the cover of the forest, then slowly made his way to the valley of Medwyn.

Later, atop Mount Dragon, the former gwythaint fledgling saved Taran from falling off the mountaintop to his death. It then repaid its debt in full by flinging itself against the Cauldron-Born, in an effort to buy Taran the time he needed to escape. The full-grown gwythaint had scars on its head, perhaps indicating that other gwythaints had wounded it as punishment for once having helped Gwydion on Taran's behalf. Rescuing Taran at Mount Dragon was the gwythaint's last act, as it fell under the deathless warriors' attack.

In the 1985 animated film, Gwythaints are depicted as flying reptilian creatures similar to small wyverns. The animators initially produced concept sketches of black birds, as the gwythaints are described in the series, but at some point the filmmakers decided to depict them as wyverns.

The gwythaints first appear in the movie as they kidnap Hen Wen from Taran, and appear a second time when they are fed food by one of the men. They also attempt to chase Taran, only to end up being chained to their perches. Later the Horned King sends them out to follow Taran and his companions. The gwythaints manage to find them and the Black Cauldron. After the Horned King meets his demise, one of the gwythaints is killed while another escapes with Creeper.