Gwystyl was one of The Fair Folk, stationed at the closest waypost to Annuvin. He was not of the dwarf variety of Fair Folk, but belonged to a taller, thinner kindred, others of whom Taran had glimpsed while in The Kingdom of Tylwyth Teg.

Gwystyl's spindly form looked like it was made from sticks; his stringy hair resembled a mass of cobwebs. He was perpetually in "a woeful state of disrepair". His nose and upper lip both "drooped wearily"; wrinkles puckered his forehead in a "mournful expression". His robe was shabby and grimy.

Gwystyl put on a perpetually gloomy and resigned air, seeming to assume the worst at all times. During conversation, he would sniffle, finger his robe and blink his eyes anxiously. Amonghis pet phrases were such sentiments as "Not today", I'm not well" and "There's no use complaining" even as he proceeds to complain. 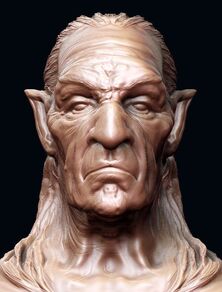 Some believed his disposition was the result by dwelling so near Annuvin for so long; others, including King Morgant, authoritatively opined that Gwystyl was actually one of King Eiddileg's canniest agents, since none but the best would be trusted with such an important post. His pessimistic demeanor was an intentional misdirection.

Gwystyl often kept a few minor, but clever, items of enchantment around that that he will "reluctantly" offer as assistance to those in need. During the events of The Black Cauldron, he gave the companions a black powder to disguise their footprints, enabling them to avoid the Huntsmen of Annuvin. In The High King he supplied toadstools that burst into flame when broken, and eggs that smoked heavily when broken, which helped King Rhun, Eilonwy and Fflewddur free King Smoit, Taran and the other Companions.

Gwystyl once owned Kaw as a pet before giving the talkative crow to Taran.

Retrieved from "https://prydain.fandom.com/wiki/Gwystyl?oldid=8758"
Community content is available under CC-BY-SA unless otherwise noted.