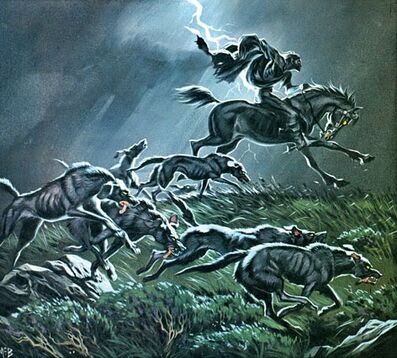 Gwyn the Hunter was a herald of death in the land of Prydain. He rode the countryside with his pack of hounds, blowing a hunting horn to announce impending doom on the battlefield. Prince Gwydion told Taran of Caer Dallben that "where he rides, slaughter follows". Gwyn would watch combat from a distance, "marking the fall of warriors".

Prior to battles, Gwyn's horn played "long, clear notes" that could pierce the breast "like a cold blade of terror". They echoed in the hills and resonated with grief and loss. The bays and bells of his dogs carried a lonely and forlorn sound.

The Prince of Don further explained that Gwyn's horn was not a certain prophecy for all who heard it. "Take it as a warning," he told the fearful Assistant Pig-Keeper, "for whatever profit that knowledge may be." Listening too long to the echoes could drive a person to bleak, wandering despair.

It remains unknown which cantrev lord, if any, Gwyn served. Gwydion said of this matter: "Gwyn owes allegiance to a lord unknown even to me, and one perhaps greater than Arawn." By this, the Prince might have meant God, Satan or the spirit of Death itself.

Retrieved from "https://prydain.fandom.com/wiki/Gwyn_the_Hunter?oldid=8854"
Community content is available under CC-BY-SA unless otherwise noted.