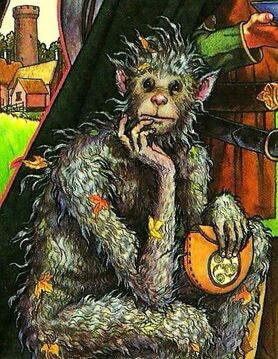 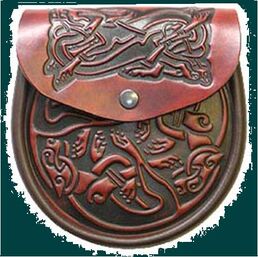 Gurgi's Wallet was an enchanted item, a small bag of leather given to Gurgi by Prince Gwydion, which provided a neverending source of food, so long as enchantment remained in the land of Prydain.

Gurgi frequently partook of the wallet's endless foodstuff, and shared it out generously with the other Companions, though he did so begrudgingly if he disliked someone, such as Ellidyr. Eilonwy noted that the wallet's food was rather bland and tasteless, supporting the recurring idea in The Chronicles of Prydain that magic was unpredictable... and never quite what one might imagine.

Gurgi, however, was quite satisfied with the enchanted product of the wallet, smacking his lips in satisfaction whenever he partook of the inexhaustible contents.

Retrieved from "https://prydain.fandom.com/wiki/Gurgi%27s_Wallet?oldid=7251"
Community content is available under CC-BY-SA unless otherwise noted.