Prydain Wiki
Register
Don't have an account?
Sign In
Advertisement
in: Characters, Heroes, The Book of Three Characters,
and 7 more

Gurgi was a creature of an unknown kind, not quite animal and not quite human. He possessed great agility and while often fearful, could be fierce in the defense of those he loved. Originally disdained by Taran of Caer Dallben as a coward and a nuisance, the two became close friends, and Gurgi came to live with him at Caer Dallben. Gurgi remained loyal to Taran throughout the entire series, often calling him "master". 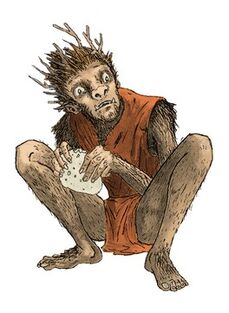 Gurgi was "both animal and human", roughly man-sized but perhaps a bit smaller, and covered with matted hair that attracted leaves and twigs. He had skinny, woolly arms, strong, hairy hands, and feet as flexible as his hands, enabling him to climb trees and to leap from tree to tree. He carried the odor of a "wet wolfhound".

He sometimes wore a cloak or jacket to protect him from the cold; at other times he seems to have been naked but for his woolly fur. 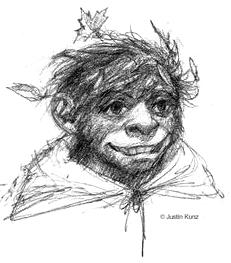 Gurgi always referred to himself in the third person (such as "Gurgi found a piggy!"), and often spoke in rhyming or twinned phrases (such as "slashings and gashings"), or in a self-pitying concern for his "poor, tender head." His thoughts frequently turned to food, to which he referred as "crunchings and munchings". After his courageous part in the battle against the Horned King, Gurgi was rewarded with an enchanted wallet that never ran out of food, until magic itself passed out of Prydain. Gurgi was generous with his bounty, doling the magical food out faithfully to friends and companion, but as Princess Eilonwy remarked, the stuff was rather tasteless.

Gurgi could be ferocious; he could wield a sword in battle, fire a bow and arrow, and ride a horse. He was loyal even unto the peril of death. When, during the events of The Book of Three, Gurgi broke his leg trying to obtain a honeycomb from a high tree, he insisted that Taran should cut off his head so he would not slow down the Companions, who were being pursued by Cauldron-Born warriors. Later, after Taran had refused to strike him dead, Gurgi gave Taran his portion of the honey-comb.

In addition to his physical attributes of fighting, climbing and riding, Gurgi's keen senses imparted him with a special gift for both spying on adversaries, and finding lost or hidden items. Even before Taran met him, Prince Gwydion was aware of these skills, and sometimes employed Gurgi as a spy. In the course of the Chronicles, Gurgi found Hen Wen in the caverns of the Fair Folk, the Black Crochan in the Marshes of Morva, and the cows of Goryon and Gast. He was first to spot the army of Cauldron-Born on the march near the Red Fallows, and in Annuvin he found the secrets of crafting stolen long ago by Arawn. The last items helped Prydain to make a new beginning after Arawn's defeat and the sunset of enchantment. 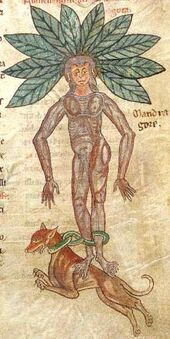 Like so many other names in The Chronicles of Prydain, Gurgi's name can be found in Welsh legend, specifically in the Welsh Triads and the Mabinogion.

And thirdly under the heading "Three Faithless War-Bands of the Islands of Britain":

... and the War-Band of Gwrgi and Peredur, who abandoned their lord at Caer Greu, when they had an appointment to fight the next day with Eda Great-Knee; and there they were both slain....

However, none of these Gwrgi's (who may indeed be the same unsavory character) bears any relationship with the Gurgi of the Chronicles. And while two hairy beast-men appear in the collection of legends called the Mabinogion (by name, Kynvelyn Keidawd and Morvian son of Tegid), Lloyd Alexander did not derive Gurgi from either of those. Rather, an 18th century collection by a cleric named Davies supplied a description of "Gwrgi" as a "hideous and gray human dog". As Alexander told Michael O. Tunnell: "And for some reason that struck a spark somewhere in my mind." 1

Historically, individuals with abundant facial and body hair have been known to exist. These documented and sometimes painted and photographed persons include Petrus Gonsalvus (16th century France and Italy, thought with his wife Catherine to be the root of the Beauty & the Beast story), Julia Pastrana (19th century Mexico) and the Hairy Family of Burma (19th century India). This condition is called hypertrichosis, and may be present at birth or acquired later in life.

In the 1985 animated film, Gurgi is a shaggy, badger-like creature, roughly the size and ferocity of a scrub-brush, whose voice distortions resemble those of Donald Duck. His loyal character is happily maintained, but this diminutive, dog-like Gurgi cannot wield weapons or ride a mount. In the film's climax, Gurgi sacrificed himself by jumping into the cauldron, foiling the Horned King's plan.