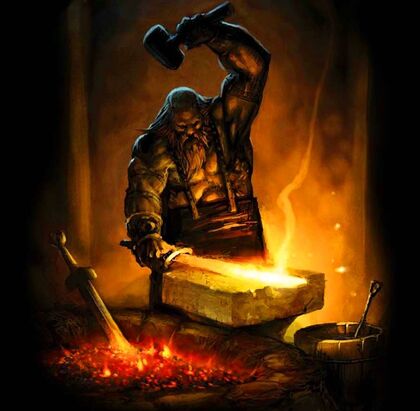 Little is known of Govannion except that, according to his name, he suffered from some unspecified handicap. He must also have been a potent enchanter, for it was he who imbued the legendary sword (and its scabbard) with its many powers.

If Govannion himself infused Dyrnwyn with spells, then the master smith must have been able, at least, to wield the enchantments of Protection -- for a potent ward was placed on the weapon to prevent its being drawn by anyone without "noble worth"; Transforming -- for the blade itself blazed with white fire; and Conjuring -- for a bolt of lightning would strike any person who failed to fulfill the requirement of noble worthiness. In addition, there may have been some aspect of Prophecy involved, for the inscription on the scabbard asserted that "Who wields it in good cause shall slay even the Lord of Death." That latter line proved to be true during the events of The High King.

The mythic figure of Gofannon is a Middle Welsh reflex of Gobannus, one of the deities worshipped by the ancient Celts. He features in Middle Welsh literature as a great metal worker and as the son of Dôn. His name can be compared with the Old Irish gobae ~ gobann ‘smith,’ Middle Welsh gof ~ gofein ‘smith,’ Gallic gobedbi ‘with the smiths,’ Latin faber ‘smith’ and with the Lithuanian gabija ‘sacred home fire’ and Lithuanian gabus ‘gifted, clever’. His apparent counterpart in Irish mythology, Goibniu, in addition to his duties as a smith, also takes on the roles of a wonderful architect and a divine hero who brewed an ale of immortality. 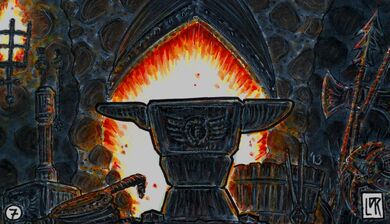 In Welsh mythology, Gofannon killed his nephew, Dylan Ail Don, not knowing who he was. In the story "Culhwch and Olwen" found in the Mabinogion, one of the tasks given to Culhwch in winning the hand of Olwen was to persuade Gofannon to sharpen his brother Amaethon's plough. 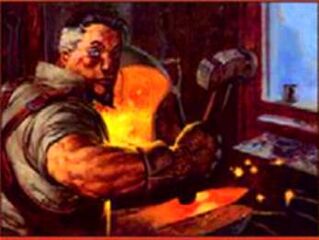 Goibniu (Old Irish) or Goibhniu (Modern Irish – pronounced ˈɡovʲnʲu or gov-nu) was the smith of the Tuatha Dé Danann. The name of his father appears as Esarg or Tuirbe Trágmar, the 'thrower of axes.' Irish texts do not mention his mother but his counterpart in Welsh mythology, Gofannon, is a son of Dôn. Grouped together alongside Luchtaine the carpenter, Creidné the goldsmith and Dian Cecht the physician in the Lebor Gabála Érenn, he is described as ‘not impotent in smelting,’ and is said to have died, along with Dian Cecht, of a ‘painful plague’. He and his brothers Creidhne and Luchtaine were known as the Trí Dée Dána, the three gods of art, who forged the weapons which the Tuatha Dé used to battle the Fomorians. His weapons were always lethal, and his mead gave the drinker invulnerability.

According to Altram Tige Dá Medar, the feast of Goibniu protected the Tuatha Dé from sickness and old age. In the St. Gall incantations, he is invoked against thorns, alongside Dian Cecht.

Retrieved from "https://prydain.fandom.com/wiki/Govannion?oldid=9317"
Community content is available under CC-BY-SA unless otherwise noted.