This article is about the book chapter. For the characters, see Lord Goryon and Lord Gast.

Goryon and Gast is the third chapter in Taran Wanderer. Here the hero runs afoul of pride and greed, but recovers with careful thought and measured wisdom. An old favorite character is also introduced as the episodic plot continues to run briskly along. 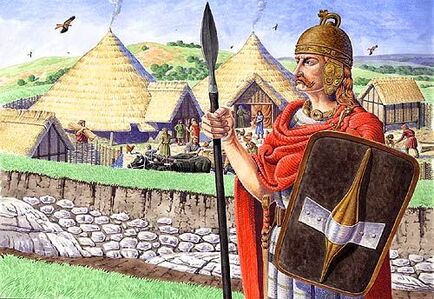 Taran visited Lord Goryon, who had been bucked from the saddle by Melynlas, and asked that the stallion be returned to him. Goryon, a "thickset" lord who styled himself "the Valorous", accused Taran of insolence and recounted a tall tale of giants and monsters, which his men had purportedly defeated to obtain the horse. Taran explained, through the lord's sputtering protests, that he and his companions only 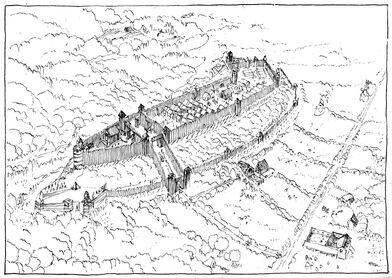 seemed as giants in the setting sun, and that Gurgi -- who put on a fierce display for the lord -- had been the "monster". Ultimately Goryon, relieved to escape the burden of mastering the stallion, let the common pig-keeper and his lowly mount go.

At the neighboring stronghold of Lord Gast they met old friend Fflewddur Fflam, who had returned to wandering as a bard for love of spring. Gast, who claimed to be "Generous", was in truth stingy and begrudging. Lord Gast showed Taran a treasure hoard, which Fflewddur suggested he acquired in the same way Lord Goryon had acquired Melynlas -- unlawful seizure. The Companions then struck out for Caer Cadarn, glad to leave the two boastful lords behind.

Retrieved from "https://prydain.fandom.com/wiki/Goryon_and_Gast?oldid=8747"
Community content is available under CC-BY-SA unless otherwise noted.