The Golden Pelydryn was the true name of the enchanted sphere that Princess Eilonwy used to light her surroundings. Not knowing the object's true name, Eilonwy called the orb her "bauble". 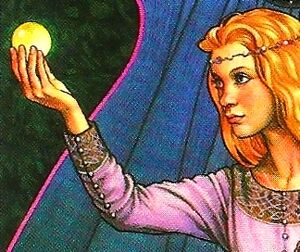 Eilonwy inherited the Golden Pelydryn from her mother, Princess Angharad daughter of Regat. The sphere could be used to illuminate and reveal the Book of Llyr, which contained the enchantments of Caer Colur and the House of Llyr.

To disguise the Pelydryn from those, such as Achren, who might misuse the sphere's power, Angharad gave the object to Eilonwy without passing true knowledge of its power. Consequently, the Princess viewed it as a sort of toy, never knowing it was an heirloom of the House of Llyr. 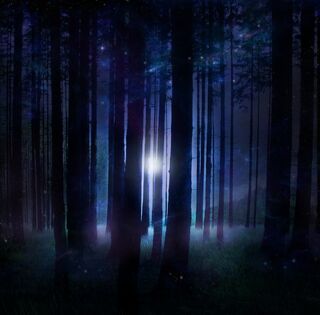 Angharad employed the Pelydryn to banish the darkness summoned by her jilted suitor Gildas, while she and her forbidden lover Geraint were fleeing from Caer Colur in elopement. 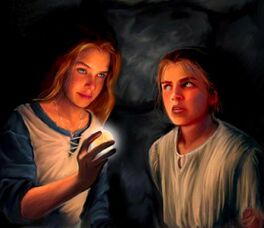 While playing in Spiral Castle, Eilonwy accidentally dropped her bauble through a crack in the ceiling and into Taran's cell. When she went to retrieve the sphere the two met for the first time. While the pair were escaping through tunnels under the castle, she used it to light their way. As Eilonwy informed Taran, Achren had raised Eilonwy as her own niece, giving her a basic training in magic, but Eilonwy suspected Achren was not really her aunt, and felt that she herself did not belong in Spiral Castle. At this time, Eilonwy was too young to have got very far with her magical education, so her powers lay mostly dormant throughout the remainder of the series.

The Golden Pelydryn played very little role in the quest for the Black Crochan, other than a moment in which Eilonwy was willing to barter her bauble with the three enchantresses Orddu, Orwen, and Orgoch, in exchange for the Cauldron. The witches declined her offer, though one imagines they must have suspected its power. 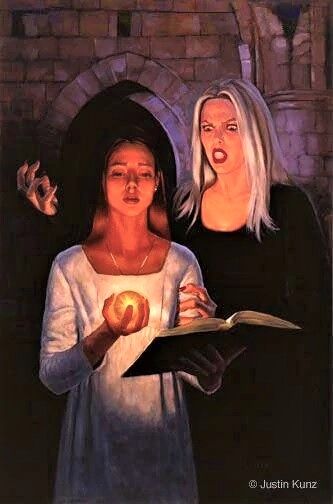 During her abduction, Eilonwy dropped her bauble in a scuffle with Magg; because he had gagged her, she could not tell him. In pursuit, Taran and his Companions came upon the sphere, and while trapped in Glew's cavern, Taran managed to light it (while thinking of Eilonwy) and view their surroundings. Later, when Rhun returned to save the companions at peril of his own life, the orb shone all the more brilliantly. In discussing the matter with Fflewddur, Taran deduced that the orb lit up when one thought of others.

In illuminating their flight through the woods, Taran and Prince Rhun noticed that the bauble's light made words appear on the pages of an otherwise empty book, which they had found in Glew's hut, in a writing they could not read. Prince Gwydion soon arrived, and revealed that the bauble's true name was the Golden Pelydryn, an ancient heirloom of the Royal House of Llyr, handed down from mother to daughter among the princesses of that regal line of Sea People. Eilonwy, as the last Princess of Llyr, was the sole heir to the enchantments of the family; she was also the only person who could make use of the spells contained in the Book of Llyr -- the presumably empty book -- which only the light of the Golden Pelydryn would reveal.

As Taran learned from Gwydion, before Eilonwy the last owner of the Pelydryn had been her mother Angharad. Yet when Angharad had fled the castle to marry against her mother's wishes, she had taken the Pelydryn with her and, later, gave the enchanted orb to her infant daughter, Eilonwy. Achren recognized the Pelydryn and knew its power, but she dared not try to wrest the sphere from the Princess by force, understanding that seizing it would spoil its magic.

At Caer Colur, Achren commanded Eilonwy to read the Book's spells under the light of the Pelydryn. However, on touching her familiar golden sphere, so recently used by Taran and Rhun whose thoughts had turned to her and to each other, Eilonwy's memory was kindled, and even while bewitched, she chose to burn and destroy the Book of Llyr.

While neither Eilonwy nor the Pelydryn appear "on stage" during the events of this book, the fate of her mother Angharad was revealed to Taran by the evil wizard Morda. Achren abducted Eilonwy as an infant, along with her "bauble"; Angharad, desperate, sought the aid of Morda. The Princess of Llyr attempted to pay the wizard with an enchanted pendant, which had been given to her mother Regat by the Fair Folk. Yet Angharad, already weak and ill when she reached Morda's abode, perished during the night. Morda kept the pendant and the Book of Llyr. Later Morda sold the (seemingly empty) spellbook to the would-be enchanter Glew. 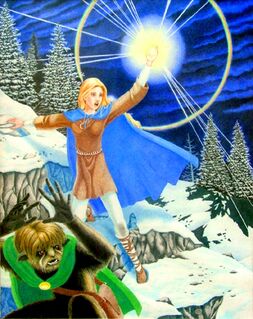 Eilonwy, separated from the companions, from a distance witnessed their being very nearly trapped by the evil warriors of Arawn Death-Lord. Calling to Taran, and lifting the bauble high, she summoned enough light to turn the darkened valley "as bright as noon." This act fulfilled one of the prophecies selected by Hen Wen from the Letter Sticks at Caer Dallben.

End of an Age

Faced with the departure of both the Sons of Don and all enchantments from Prydain, Eilonwy was invited to choose — would she journey to the Summer Country with Gwydion and the others, or would she stay behind and marry the newly crowned High King Taran? Choosing a mortal life of love over an immortal life in the enchanted realm, Eilonwy asked her powers to be removed from her, and by the magic of her ring, the light of the Golden Pelydryn was darkened forever.