Fflewddur Fflam Son of Godo was an aspiring bard, wanderer, and the sometime ruler of a small cantrev in the northeast of Prydain. After his failed trial before the Council of Bards, Chief Bard Taliesin have Fflewddur an enchanted harp, which had a beautiful tone but whose strings broke whenever Fflewddur lied or exaggerated the truth. Given his tendency to "color the facts," repairs to the harp became a regular chore.

Fflewddur was a tall, lanky man with a pointed noise and spiky yellow hair, whose clothing bore many patches and stitches sewn in by the bard himself. He always carried his beautifully curved harp. 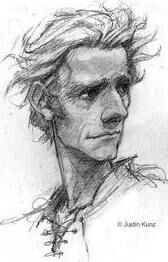 Despite Fflewddur's gift for braggadocio, he was a brave and capable warrior. At one point, while recounting his part in the battle against the Horned King, the bard told of defeating four opponents single-handedly ... a tale which did not cause a single string on his harp to break.

Fflewddur had a distinct manaphobia (fear of magic), and was especially anxious about what he considered "meddling" in "black magic". He refused even to look at enchantments unless they had proven themselves to be harmless, such as Princess Eilonwy's bauble), or were bardic in nature, such as the Brooch of Adaon or his own harp. Fflewddur sometimes complained about the latter, grumbling over repairs to the strings or calling it "the old pot"; nevertheless he refused to part with the instrument, noting that they had grown into each other.

Fflewddur was a good-hearted soul, much less interested in the pomp or glory of his role than in simply being himself; when children wandered into his throne room, he preferred to play hide-and-seek with them rather than chase them out. He had the restless heart of a bard; he was prone to wanderlust. His oft-repeated phrases were: "Great Belin!" (surprise or gratitude); "in a manner of speaking" (to explain an exaggeration so as not to break a harp string); and "A Fflam is [insert adjective here]", often followed by a "but..." statement which controverts the preceding, favorable description of his family's supposed trait. 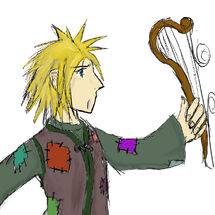 Fflewddur was a king, but made it clear that he was a minor king of a tiny kingdom, and eschewed such titles as "Sire" when he was traveling. His cantrev was "dreary and dull"; as a result, he often left it to go wandering as an unofficial bard. Though he returned from time to time to rule, he once mentioned that he sensed his subjects did well enough without him there.

Author/creator Lloyd Alexander once indicated that he modeled Fflewddur Flam partly after himself: "Rumor has is that we have very similar personalities. I will neither confirm nor deny that."

Fflewddur was the son of Godo, the king of a small northern cantrev ruled by the House of Fflam for generations.

As we learn in the short story "The Harp", Fflewddur practiced the harp and set out for Caer Dathyl, the seat of the High King and residence of the Chief Bard Taliesin, hoping to be admitted as a bard. 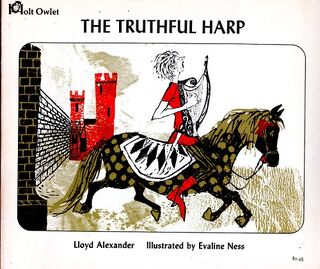 Unfortunately, his tests did not go at all well. However, the Chief Bard took pity on him and offered him a wonderful gift in the form of an enchanted harp that "almost plays itself," in Fflewddur's delighted words. Unfortunately, the harp had a flaw: Every time Fflewddur stretched the truth, a string would snap. This occurred often, for he was frequently inclined to "add a little color the facts. They need them so badly." Fflewddur's penchant for theatrical exaggeration ensured that he spent more time mending the harp than playing it; even so, he was able to make beautiful music when called upon to do so (or when he felt in the mood). Alexander has said that this property of Fflewddur's harp had been inspired by a harp in his possession whose strings kept breaking because of temperature changes. 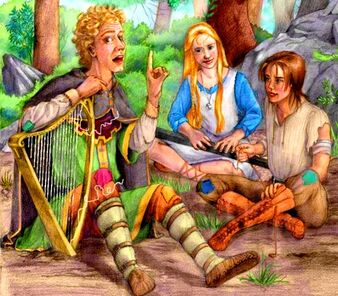 Fflewddur Fflam met the hero of the series, Taran, and Princess Eilonwy at Spiral Castle, the home of Queen Achren. Purportedly having no ear for music, Achren imprisoned Fflewddur in her dungeons, from which Eilonwy mistakenly freed him on Taran's request. The three became good friends and later shared many adventures together. Fflewddur accompanied Eilonwy, Taran, Gurgi and Doli to Caer Dathyl to warn of the Horned King's impending attack. He fought through part of the Horned King's army to reach Caer Dathyl. At the end of these events, Fflewddur was rewarded for his services with a single magical harp string that would not break, no matter how outrageously he may have "colored the facts".

Fflewddur was asked to come to Annuvin to help Gwydion and other heroes retrieve the Black Cauldron, not because of his talent as a bard, as he hoped, but because of his skill with the sword. When the Crochan turned up missing, Fflewddur accompanied Taran and the other companions to the Marshes of Morva, where he dreaded the threats of Orddu, Orwen, and Orgoch's turning him into a toad, and selflessly offered his magical harp in exchange for the Crochan -- a bargain the enchantresses refused. Fflewddur was almost killed by Ellidyr but managed to avoid being killed in time to save Taran from drowning, then bravely joined in the battle at King Morgant's camp. 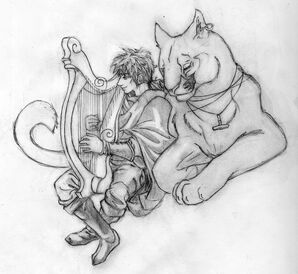 Fflewddur, on his yearly wanderings as a bard, visited Dinas Rhydnant, where the disdainful Chief Steward Magg housed him in a stable after learning Fflewddur was not an official bard. Fflewddur then accompanied Taran on the search for Eilonwy. When the Companions and Prince Rhun were cornered in Glew's hut by the giant orange cat Llyan, Fflewddur discovered that playing his harp kept her docile enough that his friends could escape. Fflewddur played for Llyan until his fingers blistered, before she finally went to sleep and he could flee. Llyan continued to pursue him, however, a turn to his benefit, since the huge cat was actually friendly, and later saved the entire party from drowning after the collapse of Caer Colur. After these events Fflewddur and Llyan stayed together in a mutually affectionate relationship, that depended largely on Fflewddur's harp-playing, while he employed her as a steed. 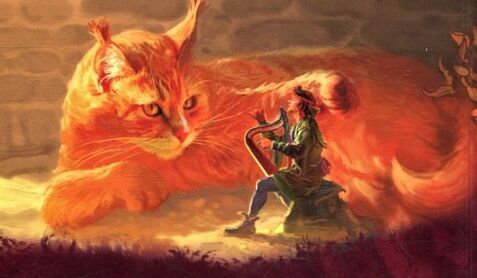 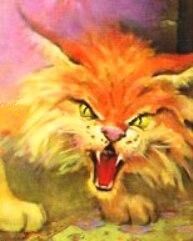 Fflewddur ran into Taran at the banqueting hall of Lord Gast, where he advised Taran and then decided to travel with the Companions for a time. Fflewddur, astride Llyan, joined Taran and Gurgi in the reconnaissance of Morda's thorny stronghold, a task that saw Fflewddur turned into a hare. Llyan was instrumental in this adventure, for it was she found Doli in frog form and brought her to Fflewddur as a gift; and she who burst into the evil wizard's hut, giving Taran the chance he needed to defeat Morda. Fflewddur then accompanied Taran on to Craddoc's valley, where he stayed a day or two before taking leave of his friends for a time. He returned later, bearing news that Craddoc was not Taran's father as the shepherd had claimed, only to find Taran injured and Craddoc himself dead from a terrible fall.

Fflewddur gathered an army from the Northern Realms and brought them to Caer Dathyl. He showed his courage by accompanying Taran, Eilonwy, Gurgi, Doli, and the Commot Folk, under the banner of the White Pig, to hold back the Cauldron-Born and infiltrate Annuvin. When the group found itself in danger of death from the cold, Fflewddur selflessly broke his enchanted harp and had Doli set it afire to warm them. Because of the magic of the harp, the fire burned long and warm, and played its most beautiful music of itself. When it finally went out, all that was left was the magical, unbreakable string.

At the end of the book and series, Fflewddur was told he must leave Prydain for the Summer Country, as he was (distantly) related to the Sons of Don. Though Fflewddur was reluctant to leave, at first asking for another task instead, he was assured that Llyan would remain with him, and that he would be given a new harp, with strings that would never break. Before leaving, he gave the last piece of his enchanted harp to Taran: the single, unbreakable magical string. 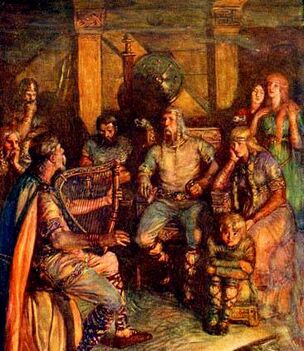 Like so many names in The Chronicles of Prydain, Lloyd Alexander drew the name Fflewddur Fflam son of Godo from the Welsh legendary collection known as the Mabinogion. In the tale "Culhwch and Olwen", Fflewddur Fflam is one of many warriors whose aid the hero Culhwch requests in obtaining Olwen's hand in marriage.

Fflewddur is also named in the Welsh Triads. In the Red Book of Hergest he is listed as one of the Three Chieftains of Arthur's Court, where he is called Ffleudur Fflam son of Godo. In Peniarth ms54 he is listed under heading #9, Three Princes of the Court of Arthur; here his name is spelled Fleidur Fflam, with no paternal attribution. 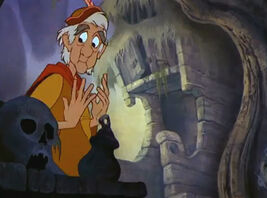 In the 1985 animated film, Fflewddur Fflam appears as an elderly, cowardly man with white hair and a pot belly. No mention is made of his royalty, but he still has a harp which breaks when he stretches the truth. He is held captive in the Horned King's castle and is freed by Eilonwy, as in the books. Later, unlike the book character, he is the object of intense attraction from the enchantress Orwen. He is voiced by Nigel Hawthorne.