Start a Wiki
Edyrnion was a great leader of eagles, who lived in Medwyn's Valley. He was probably a golden eagle.
This page contains spoilers. If you do not wish to be spoiled, do not read further.

It can be surmised that Edyrnion was the same eagle whom the Companions saw in Medwyn's cottage, when they took sanctuary in the Valley during the rise of the Horned King. That bird was not called by name, but it's reasonable to conjecture he was the same eagle-lord who later helped topple the forces of Annuvin. 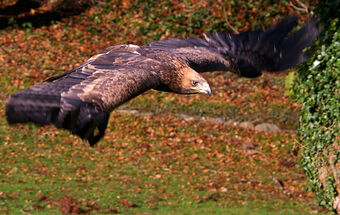 During the war against Arawn Death-Lord, Medwyn entrusted Edyrnion to gather all the birds of Prydain for battle against the Huntsmen of Annuvin. The eagle seems to have done his job well, for an army of crows near Annuvin was able to drive off a flock of gwythaints, and thus save the wounded enchantress Achren, whose survival soon proved vital to the overthrow of Arawn.
Retrieved from "https://prydain.fandom.com/wiki/Edyrnion?oldid=7426"
Community content is available under CC-BY-SA unless otherwise noted.