Dyrnwyn the Black Sword was an enchanted blade and, so far as the reader is given to know, the most powerful weapon in Prydain. The sword was forged in ancient times by Govannion the Lame, a master craftsman and weaponsmith, for King Rhydderch Hael. That legendary ruler wielded Drynwyn justly, as did his descendants, until the reign of King Rhitta, who vanished under mysterious circumstances -- and the sword with him. For long years, even the very wise believed Dyrnwyn to be a mere legend.

Jewels studded Dyrnwyn's pommel, hilt, and the battered scabbard that was nearly black with age. A "symbol of power" lay on the scabbard, a potent mark indicating a forbidden object. Entwined about the hilt and scabbard was an inscription in the Old Writing, some of which had been scratched away. When made clear by magical means, such as the Golden Pelydryn, the inscription read in full:

"Draw Dyrnwyn, only thou of noble worth, to rule with justice, to strike down evil. Who wields it in good cause shall slay even the Lord of Death." 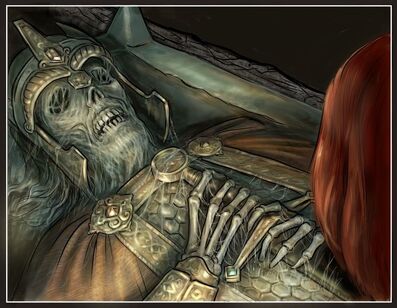 Princess Eilonwy and Taran found Dyrnwyn in a tomb of the dead, during their escape from the labyrinthine catacombs of Spiral Castle. The body of a long-dead king held the sheathed blade. After Taran grabbed a sword from one of the fallen king's dead guards, Eilonwy took the blade of the king himself! Behind them as they fled, Spiral Castle collapsed into rubble. 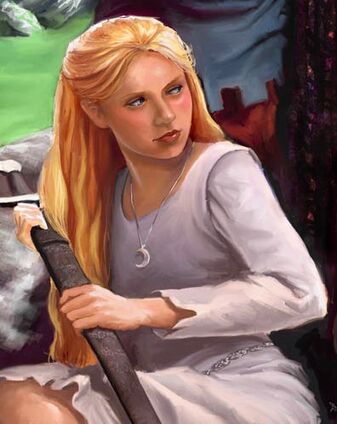 Eilonwy bore the weapon, undrawn, from its finding until the confrontation with the Horned King near Caer Dathyl. Since, according to its inscription, the sword could be dangerous to those it deemed unworthy of its power, Eilonwy refused to allow the Assistant Pig-Keeper to handle it... to his enduring chagrin.

Near Caer Dathyl, however, as the pair raced to reach the fortress ahead of the army of the Horned King, Taran saw his own sword shattered by the blade of the antlered warlord. From Eilonwy he seized Dyrnwyn, tried desperately to free the ancient sword from its sheathe. He freed it only partway before lightning seared his arm, he was flung to the ground, and the blazing weapon flew from his grasp. Yet Taran's courageous attempt distracted the war leader at a crucial moment, allowing Gwydion the opportunity to pronounce the Horned King's secret name... and so destroy him. 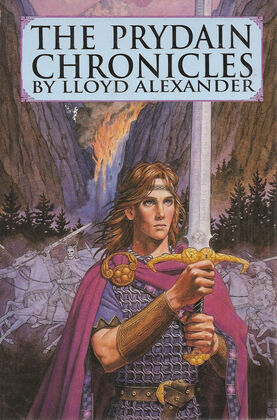 Gwydion bore Dyrnwyn until Arawn and his Huntsmen stole the weapon through magical deception amidst an ambush. Gwydion declared: "Its loss is fatal" -- and determined to retake the sword at the risk of his life. Though the Companions' goals changed through the course of events, Taran later rediscovered the weapon at the top of Mount Dragon, fulfilling part of a prophecy marked by the oracular pig Hen Wen. 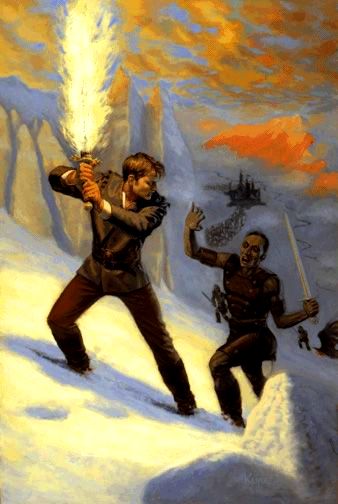 Now Taran proved his own "noble worth" by wielding the blazing blade "in good cause". Its enchantment proved deadly even to the deathless Cauldron-Born and, finally, to Arawn Death-Lord himself. Soon afterwards, the white flame of Dyrnwyn was quenched, and it became an ordinary sword, "scarred and battered". Gwydion observed: "Dyrnwyn's task is ended."

Taran offered the faded blade to Gwydion upon the latter's departure for the Summer Country, but the Son of Don deferred the gift, asserting that it belonged to the former Assistant Pig-Keeper... and now High King of Prydain.

In the story "The Sword", it is revealed that King Rhitta, who had once ruled Prydain from Spiral Castle, was the last to wield the enchanted weapon. His coldness and lack of empathy for the suffering of his subjects caused the scabbard and the blade within to blacken with innocent blood. Rhitta even stooped so low as to strike a defenseless man, the common farmer Amrys, dead with its edge. Eventually the sword refused the King's hand, deeming him unworthy to draw it. The ghost of Amrys haunted Rhitta, and at last when the raging king forced the blade free, its power struck him and all his guards dead. King Rhitta lay as he fell, for he had carved mazelinke tunnels below his castle to escape the ghost, and his servants never found him. Such did they lie for untold aeons, until Eilonwy and Taran chanced upon them during their escape. 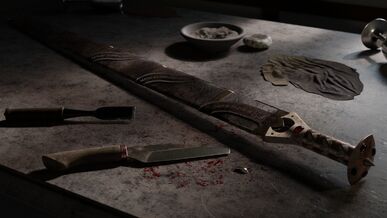 In the Mabinogion and other medieval Welsh manuscripts, Dyrnwyn is listed as one of the Thirteen Treasures of the Island of Britain. Otherwise known as "White Hilt," Dyrnwyn is said to be a powerful sword belonging to Rhydderch Hael, one of the Three Generous Men of Britain mentioned in the Welsh Triads. When drawn by a worthy or well-born man, the entire blade would blaze with fire. Rhydderch was never reluctant to hand the weapon to anyone, hence his nickname Hael "the Generous"; but the recipients, as soon as they had learned of its peculiar properties, always rejected the sword.

The Disney movie presents Dyrnwyn as "the Magic Sword". During Taran and Eilonwy's escape from the Horned King's dungeons, they stumble upon the tomb of "King Gwydion" (as revealed in production materials), whereupon Taran finds the sword, believing the entombed king to have been a great warrior. Taran first uses the sword against an attacking guard, whose axe the enchanted blade melts. Taran goes on to use the sword to disarm guards, flood a room with brandy, and sever the chain that holds the drawbridge shut.

Taran wears the sword in its scabbard during the meeting with the Fair Folk, and wields it upon meeting Orddu, Orwen, and Orgoch when the witches attempt to prevent him from acquiring the Black Cauldron. Orddu greatly desires the weapon, leading the companions to trade it for the cauldron. The sword returns one last time at the end of the film, when Orwen offers it up as a fair trade for the Cauldron, against Orddu's protests. Taran declines the offer, and trades the Cauldron in exchange for the restoration of Gurgi's life.

In Sierra's game adaptation, the Magic Sword fulfills the same role as in the film, although if the player goes through the correct order of events, making sure that Gurgi does not die, they can reclaim the Magic Sword when it is offered by Orddu.

Retrieved from "https://prydain.fandom.com/wiki/Dyrnwyn?oldid=9724"
Community content is available under CC-BY-SA unless otherwise noted.